The Food Of Gods 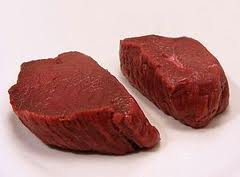 This is an image of one of my favourite meats.  Yes it's venison. Although not a cheap meat it's rich texture means it fills you much quicker than chicken.

Nick Collins of the Telegraph is suggesting more of us ought to eat venison because more than half of Britain's deer population needs to be culled every year because of the damage they do to the environment.

The problem is its cost. Suppliers keep the price high and thus consumption is low. Around here is usually easy to find venison because farmers want rid of the results of their share of culling, but the problem arises with the butchering.  The old-fashioned butchers who would prepare a carcass are long gone and modern butchers refuse to accept carcasses with no provenance.  A catch 22 situation.

However, a small portion of venison from a reputable dealer is rapidly becoming far more appealing to me in comparison with chicken which has, until recently, been a firm favourite.  I'm more aware that when I buy chicken I have little or no idea in which country it started its life.  Labelling conveys little because the EU refuses to allow retailers to state whether the meat is halal or not.  Now I approach it from the angle that all chicken is halal, except the organic free range ones I can order locally.  A four pound chicken from that source costs in the region of £10-£11 and provides a meal for four.  For £11 I can buy a couple of venison steaks, a pound of cubed meat to use in a casserole and a couple of venison burgers - and know which hills the beasts roved before being culled.

However, more informative labelling is also needed with regard to genetically engineered foods.  Some Americans appear to be far more ahead of the game in this matter and we need to start questioning too.

Ask your butcher if he can supply you with venison. A steak, grilled 3 minutes either side, with a crispy baked potato and some mashed turnip and lightly sautéd greens is the food of gods.

It's a disgrace that the EU bans consumers from knowing whether meat has been slaughtered by having its throat slit.

You see what you've done?

Now I'm going to have to go and buy some venison today, I'll take the crispy baked potato but leave the turnip & greens if you don't mind.

Would it be sacrilegious to have beans with it?

I'm culinary challenged. I had some lamb recently, it was also very tasty indeed, New Zealand apparently, must've been on its holidays.

Indeed, – Thank you Subrosa for just like pa_broon, that is tonight’s meal sorted.

Still have a few portions of venison casserole in the freezer, one now defrosting as I type. Some mashed tatties and a glass (or two) of red – wonderful.

FYI – recipe is from Delia

I thought Pegasus was the food of Gods?

Well, we are not long back from a visit to a specialist butchers based at a deer farm. With some tasty cuts of venison. As you say both tasty and filling. Cost a bit above other meats but not excessive. Worth it for eating and for added variety to diet.

Dioclese and Pegasus, wouldn't the meat be a little "high"?

A team from the University of East Anglia studied two woodland species of deer in East Anglia then extrapolated their results as being representative of all of the UK. Their conclusion was that, based on their figures, a 50% cull of the deer population was urgently required.

I would point out to the researchers that here in Scotland the species of deer and their distribution is vastly different to rural East Anglia.
Whilst species such as the red deer do require culling to maintain a healthy viable stock, a 50% cull would be totally devastating.

I would challenge the researchers to come to the Highlands, to go stalking on the high hills and moors and see for themselves the impossibility of the task they suggest.
To comply with what they suggest would require several helicopters and men with machine-guns – hardly sporting – and would do nothing for the price of venison.

They have proven skills in carefully selecting certain data, and extrapolating the results to provide the answer they deem we should have.

That's the Uni which houses the CRU.

The UEA,this the mob that has been frightening us about the world gonna
fry for the last ten years, and it now turns out that the world temperature has been stable, neither up or down for the last seventeen years, they have had to admit it themselves, but meanwhile the scam cost us mugs a lot of money.
So who stands to make a lot of loot out of this scam? Any thoughts?

And it's a disgrace that we have to tolerate EU on the label without the country name Joe.

Make sure it's a steak pa_broon because other cuts require long, slow cooking. Great for a slow cooker if you have one. Enjoy. :)

Naw pa_broon, not at all. Anything goes as they say. Mind you I don't think it would go with chips. Now don't ask me why because I like chips...

Ah JRB, you have my slow cooker for it there but I usually omit the chestnuts because the tinned ones do nothing for it.

Thanks for that though. Hope others try it and you enjoyed yours.

Ah lucky you Demetrius and I'm pleased to hear you enjoy it as much as I do. Yes it's a little more expensive than pork chops but I just get a smaller portion as it's filling and definitely a good part of any meat diet.

I wondered when someone would mention the nonsense JRB because I was talking yesterday to a farmer and he said it's nonsense. He was emphatic that the deer population here is well managed and much of the meat goes to France and Italy to prime restaurants. Bit like our scallops and prawns.