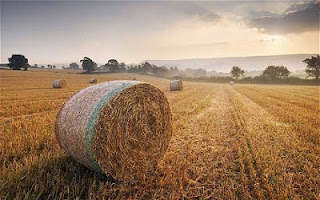 In his email accompanying the paper published below, Edward said: 'Whilst this looks to be rather a humdrum subject, the Common Agricultural Policy was for many years, the EU's biggest budget item byfar and is still very large. The attached article takes a quick canter from just after the war up to date.  I think you will find it interesting. It goes right to the heart of the European project and our relationship with it'.  I do find it very interesting and thought you may too.

Comment by Lord Stoddart of Swindon:
“I have read your interesting paper. It is short, accurate and succinct ...It would be helpful if it were circulated more widely....”

Britain and its Agricultural Policy by Edward Spalton
Since 1 January 1973 Britain has not had an agricultural policy of its own. British farming and food production have been entirely controlled by the European Common Agricultural Policy (CAP) with the institutions of the UK as its agent. This is a very short note to sketch in outline what our own policy used to be like, what we got into in 1973, where that policy originated and what it is like today.

The 1947 Agriculture Act
Britain had come close to starving twice through submarine blockade in both wars and was also very short of foreign exchange. It was therefore decided to have a policy which would encourage the production of a considerable proportion of our own food whilst allowing all the world to send its food here without customs duty. Farmers received subsidy from the taxpayer to ensure a price at which an efficient farm could be profitable. This was negotiated each year in a price review between the farming organisations and the Ministry of Agriculture, subject to parliamentary approval. So, if the world price of (say) wheat was £25 per ton and and efficient British farmer needed £30 per ton to be profitable, a “deficiency payment” of £5 per ton would be paid. Without this British farms could not compete with overseas areas enjoying more favourable climatic and other conditions. Thus the taxpayer paid once for a degree of food security but the market was otherwise allowed to operate freely. There was bureaucracy but very little by present day standards. Low food prices assisted the less well off and reduced pressure on wages. It was a simple, logical system for a largely urban population . Commonwealth and other countries could ship their produce here freely and our industrial exports flowed in the opposite direction.

The Approach to the changeover
The British government tried from the early Sixties to become a member of the European Economic Community, which was called “the common market”. By the early Seventies, they were telling people that the Commonwealth countries no longer wanted anything to do with us and that our future lay in Europe. As soon as we were inside the Common External Tariff of the EEC, our exports to Europe would boom. I recently (2013) heard a recording of Roy Jenkins saying this and well remember a young John Selwyn Gummer, now Lord Deben, telling our 1972 corn trade association conference the same thing. As well as sacrificing our own fishery, the government was ready to ditch our traditional food suppliers in the Commonwealth who would be largely excluded from Britain by a high EEC tariff barrier. The British “family of nations” would be deliberately weakened. We would have to switch to buying European for most foods and at prices far above the world prices we had previously paid. People would have to pay much more for their food.
The Common Agricultural Policy (CAP)
The original six countries of the EEC hammered out their policy in strenuous negotiations during 1962. These went on so long that four of the delegates had to be carried out, suffering from exhaustion! Like all EEC policies it became binding in its entirety on existing and future members. Put very simply, the policy kept out most temperate foreign foods by high import duties. It guaranteed prices to farmers by providing a buyer of last resort. So the consumer paid more for his food and then had to pay taxes so that the EEC agencies could buy up surplus produce at prices which were thought adequate to provide a reasonable living to keep the small peasant farmers of Europe from revolt and communism. This was the origin of the grain, beef and butter mountains and the wine lakes. Agricultural productivity was rising very quickly. With an open-ended

guaranteed price for all that was produced, these surpluses became grotesque. Much was exported to countries outside the EEC at prices far below the cost of production, thus destroying agriculture in developing countries.
Even that was not enough and much of the surplus was “denatured” by making it unfit for human consumption, often in animal feed – to produce further livestock surpluses! The French took full advantage of this. After joining the EEC an Irish politician described the CAP as “Ireland's oil”! They now shipped food to Britain at high guaranteed prices. Formerly they and the French had to compete for our trade in the world market.

Where did the CAP come from?
Obviously, from the negotiations between the original members but it was such a strange policy, so very detailed and ornate that there had to be an ideology, a coherent plan behind it. The official, guaranteed price of wheat, for instance, was calculated from the place in Europe which was reckoned to have the greatest shortage of wheat, Duisburg in Germany. As you travelled further away from Duisburg, the price got a fraction lower each 100 kilometres. It was all very strange and required massive officialdom. Where did it come from? The answer will not be entirely surprising to those who have read books like Rodney Atkinson's “Europe's Full Circle” and “Fascist Europe Rising” but the precise fit between what was proposed in Berlin in 1942 and what was agreed in Brussels in 1962 is remarkable. The original papers were the record of a conference, entitled
European Economic Community (1942)
Excerpts from the introduction by Professor-Doktor Heinrich Hunke, Economic Adviser to the Gauleiter of Greater Berlin (Dr. Josef Goebbels), President of the Berlin Association of Merchants and Industrialists.
“Politically the three power pact has restored to honour the age old concepts of of life, people and living space and secured a natural order and neighbourly coexistence as the ideal of the New Order for the peoples of Europe. Militarily the basis of English economic policy...is shattered”
“State economic leadership ...forms the core of the new theory and practice. It replaces the autonomic egotism and automatic , self-acting laws of the Anglo Saxon theory”
“It contains secondly the obligation that from considerations of European freedom, continental Europe must receive first loyalty in all economic transactions”.
“The old industrialising tendencies which owed their rise to the falling prices of agricultural and raw material producing countries must now belong to the past”
“With an assured demand for agricultural products and raw materials at reasonable prices, a great increase in prosperity has arisen....”
Excerpts from the paper “The Economic Face of the New Europe” by Walther Funk, Reichsminister for the Economy, President of the Reichsbank and Minister for Post War Planning.
(talking of the time before the establishment of the Nazi EEC)
“Buyers were lacking who were ready to take significant quantities at stable prices” “self sufficiency in food supplies was lost”

“ This space* can however feed and clothe them and amply supply them with all necessary goods” (* Space = Raum, the European Lebensraum or living space)
“Also the basis of food production, taking into account the possibility of infrastructure improvement, is completely sufficient”.
“Nevertheless as trade within the great economic area, it will enjoy all the advantages of a state- controlled market. The farmer in Norway, the market gardener in Holland and the Danish poultry breeder will need have no concern that they can dispose of their produce or have it left on their hands. They also need not worry that the price will fairly reward their efforts. They will know that their production and sales prospects are secured by inter-state treaties and that there is no more room for speculators and crises”.

The Same but Different
Of course, the economists, ideologues and planners of the Forties could not foresee the huge increases in agricultural productivity which would create the food mountains. The brisk managers of the Third Reich would quickly have adjusted the system. But in the post war Europe it was not so easy to alter treaties, once they were agreed. The French and the Irish would exploit the system for all it was worth, claiming European idealism as they pocketed the wealth of the British housewife and taxpayer. When Britain made reasonable requests for reform, they were often treated with contempt as anti European. In one debate an impassioned French lady proclaimed “We are building Europe and you are arguing about the price of cabbages!”
Eventually reform of a sort did come but for a run of forty years, the EU's biggest policy and budget item was ruled by the principles and precepts laid down in Berlin in 1942. The similarities of policy are far too great to be merely coincidental. The detestation of genuine free trade and intense dislike of “the Anglo Saxons” remain as fixed attitudes in European economic and ideological circles to this day. The economist, Roger Bootle discovered this on a visit to Germany in September 2012. He wrote . “There is a chasm between us in our understanding of the way the world works”*
The EU system has now “decoupled” farm subsidy from food production. Farmers receive a Single Farm Payment and for what? Well, essentially for being farmers! It is based loosely on what each farm used to produce years ago. Increasingly it is linked to ever more precise evironmental regulation. Through various Directives the EU now has the power to control the intensity with which Britain is farmed. There are incentives for environmental improvements and MEPs recently voted a measure which would permit farmers to claim subsidy twice for the same activity – once for “stewardship” and secondly for the contribution to the “green” agenda!
So the lunacy and opportunities for corruption of a single agricultural policy from Sicily to the North of Finland continue – still hugely bureaucratic, a massive budget item to be funded by contributions from British taxpayers. To use an Irishism, it is certain that we will get on better together with our European neighbours when we are apart and not unequally yoked in the alien polity of the EU.

A commentary and full translation of the 1942 papers are available on www.freenations.freeuk.com under the title “The EU's Evil Pedigree”.
*Daily Telegraph 30 Sept 2012 “Sensible for Germany to leave euro, but they're not ready yet” or Google “Roger Bootle Anglo Saxons”

Wot, no comments,
(Sorry, don't know how to type a picture of Chad

I hadn't thought my composition was like that referred to by Sir Joseph Porter KCB ( the "ruler of the Queen's Navy" in HMS PInafore) who said " Official pronouncement are invariably unanswerable".

Won't somebody have a go?