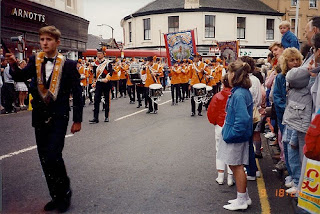 It's Good Friday.  Once upon a time it was a day of fasting and penance but to the vast majority living on these islands that tradition has long gone and it's just another holiday.

My acknowledgement of the day will be the consumption of a hot cross bun sometime during the afternoon because, although I'm not a practicing Christian, I believe in Christian values.

So often these days people are mocked for their religious beliefs and the trend is for non-believers to push for the UK to be a secular society.  I've listened to both sides of this debate and have yet to decide which side of the fence I stand, but there is another smaller debate which starts to ripple through Scottish society at this time of year and that's the issue of Orange walks.

It's the time of year when members of the Orange Order make application to local councils to march through main thoroughfares.  This year in Perth the Orange walk date clashes with the penultimate day of a popular festival, Perth Festival of the Arts.  My MP, Pete Wishart, isn't happy - "the worst possible timing" - and has urged the organisers to reconsider the date.

He goes further and says: "We don't want marches like this - Perth does not want to get involved in these sorts of issues."

I don't know what he means by 'these sorts of issues' but suspect he means religious issues. Rather strange coming from an MP whose party promotes religious tolerance.

However, I agree with him but perhaps not for the same reasons.  The Orange Order and other groups associated with 'the marching season' originated in Northern Ireland and drifted to Scotland with Irish immigrants. They are not part of the Scottish culture and throughout my lifetime they've been seen as an embarrassing spectacle.

I'd go further than Pete Wishart and say these marches through towns and cities should be stopped. It's sad, in a society where religious tolerance is promoted, that Irish protestants still need to flaunt their dislike of their catholic neighbours by taking over whole towns for a day each year.  If they wish an annual celebration perhaps it should be in the style of the Jehovahs Witnesses who gather annually at Perth's football ground, which is on the outskirts of the city.

An even better idea would be to have an annual gathering somewhere in the west where the Orange Order is much more prominent.  Surely the days of marching through Scottish towns and cities are past. Let them celebrate without disrupting the lives of others and save us the embarrassment of watching young and old men (some rather the worse for wear), attempting to keep in step with each other and seldom succeeding.

Is it that? Or rather that 'non-believers' begrudge having religion of any flavour rammed down their throat?

Allowing one religion to totally disrupt a town for one day opens the floodgates for every other religion to disrupt that same town on other days. Can't have religious discrimination now, can we.

It's all down to attitude though isn't it SR.
Religious traditions can be celebrated in a way that that's pleasant and understanding of others and cause no real offence. For example, I have yet to hear of any religious group objecting to (pagan?)Morris dancers. Or, a group of people can go out to deliberately upset and annoy another group by aggressive in-your-face bullying and name calling.
One attitude is good and the other is bad - how do you decide?

What I object to is streets closed off and parking suspended.
Fair enough if the organisers pay the costs.

Crinkly Amp,
I remember the more innocent days of Flanders & Swann, sending up what they saw as the threat of English nationalism in "The English are best"

"The Irishman too our contempt is beneath.
He sleeps in his boots and lies through his teeth.
He blows up policemen, or so I have heard
And blames it on Cromwell and William the Third"

People should have a right to march on the streets if they wish.

It is frightening that this is another very basic freedom that needs to be explained to Scottish Nationalists. Perhaps Pete Wishart envisages a country where only people he agrees with are allowed onto Scottish streets.

I've absolutely no idea what a hot cross bun has got to do with Jesus Christ.

It could be a bit of that too Joe.

We shouldn't have discrimination but we do Joe.

That's true Woodsy. I've always felt the Orange walk is intimidating though and it disrupts the centre of towns on a Saturday. I'd like to know the cost of the policing too - very probably much more than a football match.

I don't know how to decide. All I'm suggesting is that this Irish tradition isn't appropriate here.

The whole of Perth will grind to a halt for them Hamish and it will be impossible to get parked anywhere. Sadly it coincides with the Festival of the Arts which has some good events.

Goodness me William, just because I believe in independence isn't related in any way to Orange walks.

If you don't have an idea about hot cross buns then I won't explain easter bunnies to you. :)

Is Pete Wishart not a Nationalist? As is Roseanna Cunningham. And John Mason. Indeed, I'm not aware of any SNP politician who defends the right of the Orange Order to march. Perhaps you know of one.

The Orange Order is a religious organisation. Part of the problem is that most Scottish people don't really know that much about Christianity other than a vague mushiness. The OO is a Bible-believing organisation in a society that prefers a pick 'n' mix Christianity.

William, it's not only nationalists who object to Orange walks.

In my lifetime I've met many who belong to the Orange Order and I would say most did for reasons other than religion, although of course publicly they would deny that.

Id say the Orange Walks and their "Green" counterparts have nothing to do with religion. Both sides represent tribalism which is a different thing altogether.

These marches, and those who associate themselves with them, aren't there to promote God or Christianity but something else entirely. You only have to look at the followers of such marches to figure that out: one side will have the weans decked out in the colours of Rangers FC and flags bearing the Red Hand of Ulster. The other side's weans will be sporting Celtic Colours and Irish Tricolours.

It isn't just one day a year either Rosie. In Glasgow and elsewhere in the West of Scotland the number of marches from now until well into Autumn beggars belief and the disruption is massive. So is the cost of policing such marches, borne by the taxpayer. Attempts to scale them down, particularly the Orange Marches, have been met with absolute fury as have suggestions that the Order might wish to contribute towards policing costs. No indeed. It is their absolute right to bring Glasgow and surrounding areas to a complete standstill.

If we must tolerate them then like you I'd favour forcing them to assemble in a park somewhere and they could march in circles to their hearts' content. And the rest of us can get on with getting from A to B without being held up.

There is something far deeper involved here. Last August I addressed a meeting near Belfast of overwhelmingly Loyalist sympathies. They were very solid, serious , concerned citizens. One man arrived a little late and left a little early. It was only later that I was told he was the Revd Martyn Smith, former Grandmaster of the Orange Order.

One thing which struck me was the high proportion of people wearing the ribbon of the Society for the Protection of the Unborn Child - something on which serious mainstream Christians, Catholic & Protestant, are united.

The meeting was political not religious - constitutional you might say, as I was speaking on behalf of the cross- party Campaign for an Independent Britain.

The difference in atmosphere from a British mainland meeting stemmed in part, I think, from the fact that not a few of those attending had spent many years in serious danger of their lives - with one foot in eternity as it were. My host, a retired academic, still had a permitted fire arm for personal protection although he was not carrying it. They were the sort of people you would like to have with you in a tight corner - and I am a Catholic though of the Orthodox rather than the Roman fold.

I wasn't aware so many were held in Glasgow, but thinking about it (each Lodge having their own march), I can see the problem.

Aye that's what I suggest. In Perth give them the north or south Inch for the day and keep them out of the city centre.

What about marches against government policy regarding benefit changes? Can they be stopped as they are a nuisance?