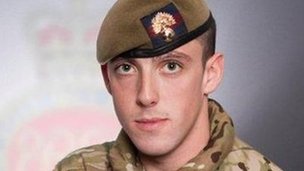 He was killed yesterday while on patrol in the Nahr-e-Sarj district of Helmand province, Afghanistan.

The father of twins was a Guardsman with the 1st Battalion Grenadier Guards.

There have been 410 British military deaths since Westminster politicians voted to go to war with Afghanistan. 410 unnecessary deaths.

And not a single British MP who voted for this fiasco of carnage.

I am constantly surprised that there is not more protest about the folly in Afghanistan. I have to assume that is because it has the shield of legality & NATO which means that politicians are not voicing what really all the public think. Just bring the troops home there is no point to this & there never was.

There have been plenty out there on VIP visits surrounded by our best soldiers though Joe. I believe most stayed 2 hours at most.

I think people have become used to us being at war Observer and as long as it doesn't affect them or their nearest and dearest then they'd rather not think about it.