It's Too Easy To Forget 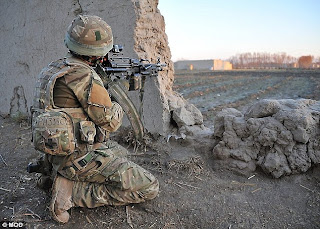 The Ministry of Defence's website states: 'Britain's own security is at risk if we again allow Afghanistan to become a safe haven for terrorists. It is therefore vital to the UK that Afghanistan become a stable and secure state that is able to suppress violent extremism within its borders'.

Afghanistan always will be a country with a medieval culture. It is corrupt and the eleven years of this war have done nothing to stem the corruption.  In fact it could be said that due to the gigantic sums of money the West has given to the country, the West has encouraged and extended the corruption culture.

As at 15 February, a total of 398 British forces personnel have died while serving in Afghanistan since the start of operations in October 2001. Very seriously injured casualties number 275 and seriously injured or wounded 279. Field hospital admissions of those wounded in action number 1,874 and there were 5,487 aeromed evacuations carried out.

These statistics do not include the six soldiers now confirmed killed yesterday while travelling in a Warrior armoured flighting vehicle when it was caught in an explosion.

The soldiers only started their tour of duty a couple of weeks ago, having left the UK on Valentine's Day. Five were from the 3rd Battalion the Yorkshire Regiment and one from the 1st Battalion The Duke of Lancaster's Regiment and were conducting a routine unpartnered patrol in the desolate scrubland of border between Helmand and Kandahar provinces. Recovery has been hampered by terrible weather conditions.

This is the biggest loss of life in one incident since an RAF Nimrod crashed after a fire broke out on the plane moments after mid-air refuelling in 2006, when 14 service personnel died.

The death of these soldiers takes the fatality figures to 404 of our armed forces who have been killed in country which is resolutely determined to defend its culture. We should not be there and when- if ever - our troops are withdrawn, history will not record this war as anything other than a dreadful result of political warmongering. Few, if any, of our politicians will have given a second thought to the dead, their colleagues and families today.

I care and I'm sure many others do too. It's too easy to forget.
Tweet
Posted by subrosa at 19:21

I don't think we are there to bring "democracy" to the Afghans. As you say, these people neither need it or want it. In most Arab nations (I speak from personal experience) it is the strongest (tribe) that conquers. They rule for as long as they can dominate the others.

Watch for news-clips of American soldiers walking through the poppy fields. Watch how carefully they tread. They are very cautious and never damage a single plant.

I am now convinced it should be renamed the War For Drugs.

Before anyone leaps in to say "Hearts and minds, mate. They are doing that because if they destroyed all the poppy fields it would just create more enemies" I am not having it.

Something nasty is unfolding live on TV, and we do what we do best: we just sit there and watch it.

we've been protecting our asset, specifically helmand province the heroin growing region in afghanistan, since before the opium wars with china & tv is just to program the population into accepting illegal & immoral wars of aggression through guilt because a tiny percentage of the population is being murdered by policy makers we didn't even vote for... & don't mention lockerbie the cia & their heroin route from syria [gadaffi now doesn't look so bad eh?]

Seeing as you think it is OK for them to be resolute to the point of murder to defend their culture ...... what about ours? No? Thought that might be the case; it would be called racism, and we would be lectured on multiculturalism or something.

Trouble with that kind of argument is that it does not work in reverse.

When faced with global terrorism, we either fight it on their ground or on ours; soldiers are better able to defend themselves than civilians.

I sometimes think the only thing that would wake civilians up is to have the fight land on their doorsteps; trouble is you would then have to do something about it yourselves, and judging from past experience that would be just to blame the military for not doing exactly what they are doing here.

The fight I'm afraid looks very different when you are face to face with the enemy and have no way to defend yourself; and militant Islam has a global agenda.

I speak as an ex WO2 in the ADF

the only "terrorism" is created by our own secret services, as history proves... just who created these afghan terrorist to fight the russians in the first place??? we reap what we sow [another example? green was the secret service operative who ran both sides in ireland in the british military red hand? red army faction? black september? spk? baader meinhof? gladio? tonkin? pearl harbour? lucittania? the list goes on & on & on & onI'm surprised people are still so gullable]

Ranty, it's strange that you're the second person to mention the poppy fields and US soldiers to me in the past couple of weeks.

You may very well be right. The war ON drugs was never a runner. All we do is feed addicts more addictive drugs.

Aye dognamedblue, you're thinking along the lines of Ranty above. Something for me to research further.

Exactly Michele. We've lost control of our own culture because we've allowed the lefties to take over.

If we're fighting militant Islam over there, then why are there so many militant Islamists in the UK? Our security forces hands are tied and therefore they do as instructed - treat them with kid gloves.

The fight is on the doorstep yet our politicians side-step it.

Good point dognamedblue. Britain is responsible to having fingers in many pies.

Desperately sad news. How many more will die or be injured ( on both sides) before we withdraw in 2014 ?
Karzai will stay in power as long as we're there to protect him. Then he'll be off to Dubai or wherever with his billions and it will be back to business as usual.
200 years of history repeating itself tends to indicate that someone else will try their luck and invade them again though.

6 soldiers dead. Gone. Lost. Never to return. Okay they signed up and they take the money and there's a bit of machoism thrown in too, but killed? Defending what exactly? For whose benefit?

The IRA brought the fight to the streets of the UK.In Northern Ireland they killed fairly spectacularly. Not a lot changed until they changed their tactics and started going after the financial targets. Suddenly the government sits up and takes note.

Afghanistan, Libya, Syria etc. are the responsibility of the Arab nations to sort out or leave alone as they see fit. The UN is a waste of space.

Why would Call me Dave want to send British troops to these terrible places? Why would he want to spend ridiculous amounts of money we don't have on wars? How can he sleep at night?

Tackle extremism in the UK first. If the powers that be put half as much effort into sorting out extremism here as they do with religious bigotry, sexual orientation, political correct and green issues it wouldn't be a problem.

In the meantime real people are losing their lives or are being mutilated for causes which are at best doubtful.

How does Call me Dave sleep at night with that responsibility?

A sad, sad loss of young lives. My heart goes out to their families.

But can anyone in a position of authority honestly answer me, without bias, spin or well worn platitudes, just one question …

The UK military is in Afghanistan to promote the trade in heroin and the trade in armaments, among other things. Afghanistan was relatively prosperous and peaceful (girls in miniskirts) before the CIA decided to put the Mujahideen into power. And, as Robin Cook said, al Qaeda is the CIA. Hope you do a blog on Operation Gladio, showing the links between the military and the 'terrorists'.

JRB the answer is money. Aangirfan explains it more fully.

Now I know about it Aangirfan I will. Some research is needed but hopefully I'll get around to it next week.

Oh Karzai will be looked after no matter what RM. And his henchmen.

I have no answer TT, because as you know, I think this war is completely unjustified from a security point of view.

We leave our borders wide open yet fight in a desolate land?

Politicians have few morals or scruples. Power is their only value.