How Old Is Too Old To Drive? 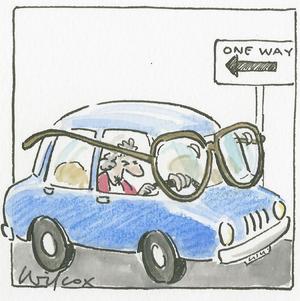 Research by Australia's Monash University's Accident Research Centre has found that older drivers go slower on the roads but apply their brakes more slowly than middle-aged and younger drivers.

How slow are they?  Drivers over 70 take, on average, almost half a second longer to brake to avoid a pedestrian than middle-aged drivers.

Since 1974 UK motorists have been allowed to continue driving until they reach 70, after which they simply fill out a form every three years to declare they are fit to drive and are free of ailments such as epilepsy, diabetes and heart conditions.

Last year the European Commission announced the EU Directive on Driving Licences which has already been approved and gives member states the option of imposing tests every two years for motorists aged 60 plus and annually for those 76 and over.  However the EC decided that 'the Directive does not set out any obligation for EU member states to have additional measures for elderly people'. That means it's an option, not a requirement.

Now the Westminster Parliamentary Advisory Council for Transport Safety (PACTS) has decided there are too many over 70s - six million if the statistics are to be believed - on the roads and what's needed is a 'national strategy for an ageing car-driver population'.

Statistics show that older drivers cause fewer accidents than their younger counterparts but maybe this is because they already 'self-regulate'. Department of Transport statistics show that 8% of the country's drivers are over 70, yet they are involved in only 4% of crashes resulting in injury. 15% of the country's drivers are in their teens or twenties and are involved in 34% of crashes where injuries occur.

But these statistics won't stop Westminster doing their best to prevent older people from driving. Now that the issue has arisen in the MSM, I foresee the cost of driving rising for me; be it a new test or some other way to glean money from my pension.

I admit I don't particularly like night driving these days but I never did. Causes of visual ageing are studied here and I've no doubt the research is fairly accurate. I don't see in the dark nearly as well as I did 10 years ago and therefore I avoid driving in the dark as much as possible. That doesn't mean to say I'm a bad driver. I adjust my speed to accommodate my declining vision and no longer nip along at 60mph in failing light.

Do we older driver need a course accreditation system or an information pack?  Of course not. The majority of us drive safely. I do agree with David Williams, the chief executive of the Guild of Experienced Motorists though.  He suggests, when drivers renew their photo ID form of licence every 10 years, there should be an added requirement for them to get a stamp on their application from an optician, confirming that their eyesight has been tested and is all right.

What about those who didn't opt for photo ID licences though? It won't be long before the system catches up with us and insists we buy a plastic licence with a photo of an old, digitally aged person on it. That's why I never applied for one.

Yes that photo ID license was definitely another money making scam. You usually have to show the pink paper part anyway( with details of any convictions etc ) before you can hire a car or whatever.

How will they get round anti-age discrimination regulations? They'll have to retest everybody.

The entire testing regime is flawed in any case, as many bad young drivers are turned out as there are bad older drivers.

Of course, its a demographic we like to latch on to when it comes to joking around, cushions and tissue boxes on the back shelf? It's as much a label as a phat body kit and slammin' decals is for young folk and just as poor an indicator in terms of driving ability.

You just know the retesting will be a money spinner so of course that is what they'll do.

(Also been talking to my local council about the Entertainment licence issue brewing, it'll soon be ready for drinking and its going to leave a bitter taste in peoples mouths. In East Lothian the fee for a licence is only £5 but they want to raise it to something approaching the norm which is around £70 on average.

"How will they get round anti-age discrimination regulations?"

They seem to get around them OK when preventing underage people from driving.

Had anyone noticed that the Gov red tape challenge has come up with a scheme to remove the paper licence part and just have the photocard - apparently this is easier because you don't have to store a sheet of paper (I kid you not, it was on Con Home a while back).
Of course we know it's nothing to do with costing more or charging anyone who wants access to the record (like car hire firms).

It'll be the Insurance Industry which will solve the 'issue' by pricing elderly drivers off the road.

I suspect a 90-year old driver will only be able to renew their insurance via their current insurer, which will 'extort' a suitable premium.

"Statistics show that older drivers cause (?) fewer accidents .....". The truism 'Lies, Damn Lies & Statistics' springs to mind. The very elderly might have fewer accidents, but I bet they cause quite a few.

Over 70 years, you must renew your licence every three years now. The eyesight requirement is "can you read a standard UK numberplate at 20.5 metre". And I know a few young drivers, who have never been able to park, and some who think the accelerator pedal is an on/off switch.
The insurance industry can give a good idea of where the dangerous drivers are, but things like this can quickly become a means of social control and money making.
It would be great if as much effort that will be spent on this witch hunt was spent instead on keeping the bankers and the politicians honest in their jobs or is that too much to ask?.

Is there a pink paper bit with the photo type licence RM? Goodness me I didn't realise that.

Yes it is an EU directive.

Hello George. I can see that on the cards in the future. Another nice wee earner for the treasury.

That's interesting about the public entertainment licences down your way pa_broon. Of course they will also need notice of the event etc which will cut out the wee events.

Ah Woodsy, you've answered a question I was just about to ask RM.

That's what the link mentioned Joe. Some companies are refusing to insure new over 70s already.

Any stats to show that the very elderly cause more or the same amount of accidents as the very young ie 17/18/19 year olds?

I've just a few years to go Apogee so must start practicing reading a number plate at 65ft. Some I can't read at 20ft because they're so filthy.

Of course that's too much to ask. They don't have to worry as they have drivers.