The Horror Of War Continues 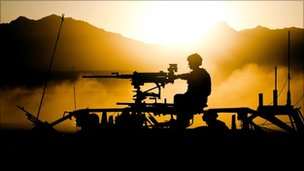 The horror of war continues and yesterday another British soldier met his death in the savage surroundings of Afghanistan.

The serviceman, from the 2nd Battalion, The Mercian Regiment (Worcesters and Foresters), died after being struck by an IED.  He was working alongside an Afghan security forces' patrol when the blast occurred.

His death  takes the British armed forces' total number since operations began to 405.

When David Cameron was being sickeningly feted by the US President last week, it was reported the two leaders would be agreeing tentative plans for British and US troops to end their lead combat role by the middle of next year. The only information publicly available is that Obama has pledged to bring home, by this September, 30,000 extra US troops that he sent to Afghanistan as part of his 'surge'. Cameron says he will bring back 500 extra troops.

It sounds a relatively easy task to pack up an army and bring them home, but Afghanistan is proving to be a a logistical nightmare.  Craig has the story of Defence Secretary Philip Hammond's visit to Tashkent at the end of February, when he attempted to negotiate our retreat.

Not only will our children be paying all their lives for the follies of recent and present warmongering politicians, but their children's children and many future generations.

I hope Observer doesn't mind if I quote her comment from the previous post. It sums up what many of my friends and acquaintances think:

I am still puzzled why we have not seen mass demonstrations on the streets about this, & to be honest I think the idea that all serving military in Afghanistan are ''heroes'' may in part be responsible for making people associate being against the war with being against the military thus stifling perhaps the urge to dissent.

I imagine that when the last NATO troops leave Kabul it will be like when the last US troops left Saigon. I don't remember that in person but I have seen the footage on telly.

God help those Afghans who came out against the Taleban as they will be left to their fate.

"God help those Afghans who came out against the Taleban as they will be left to their fate."

I'll spare no tears for Karzai's lot. Oh, sorry, those corrupt bastards will be in Malaga by then.

I think Observer means the general population OR and not the corrupt politicians and their hangers-on.

Sad news about the latest casualty in Afghanistan. I wonder how many more must die or be injured before we hand power back to the Taliban in 2014.
Our last days in Iraq were a bit desperate as well. Hunkered down at Basra airport. Sitting ducks for any passing militia firing off the odd mortar or rpg at us. Followed by a handover at dawn ( for the cameras) and a quick exit out of dodge.
Our troops are excellent but are led by idiots. Most of whom now sit dressed in ermine in 'the other place' or sit pontificating at length on comfy sofas about what we should be doing to sort out Iran etc.

For anyone wishing more understanding of Afghanistan, can I suggest....
http://en.wikipedia.org/wiki/Timeline_of_Afghanistan
.....as a good starting point.
The comment has been made that if we leave ,Afghanistan will revert to the middle ages. After looking at the history, I think it could be correct to say that Afghanistan has never left the middle ages. The people have just learnt to make and use more effective weapons. I wonder where the learnt?

Our last year in Iraq was horrific RM for the reasons you mention. How the troops coped with the mental stress we can only imagine.

I'd agree with you Apogee. It's their culture though and without their willingness to change it they will stay in a medieval time warp.

As you say, it is their culture, and it is interleaved with their religion,the greatest majority of them wish to have it that way and for us infidels to get the hell out (literally) and let them go back to their way of life,primitive though it seems to us.
We should have left them to get on with it two centuries ago, but we don't seem able to learn by experience,we spend a lot of time repeating history.Will our rulers learn? Not on past examples. Has no one asked how a poorly armed rag tag bunch of tribesmen are able to fight the biggest and best armed armies(allegedly) to a standstill? For the last two plus centuries? What are we doing wrong,so we don't repeat it?

What we're doing wrong is being there Apogee. The initial operation was to find Bin Laden but of course we didn't.