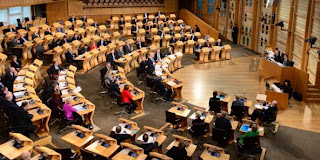 The Scotland Bill is nearing the end of its parliamentary processes at both Westminster and Holyrood parliaments and the UK and Scottish Governments have been in negotiation over final amendments said Cabinet Secretary for Government Strategy Bruce Crawford this week. I was sure - as were some of you - that the Scottish Government would kick the Bill into the long grass, but it appears enough concessions have been made for it to be acceptable.

Having agreed a package of changes to the Bill and undertakings on its implementation, now that the harmful provisions to take back existing devolved powers have been removed, both Governments will now recommend that their respective Parliaments support the Bill.

The Scottish Government has secured important changes to the sections of the Bill dealing with borrowing powers and the Supreme Court and to protect Scottish interests, particularly with regard to securing agreement on financial implementation including adjustment to the block grant.

However, Bruce Crawford said the Bill was still a 'missed opportunity to give Scotland the tools to stimulate the economy and create jobs'. Along with many he believes the Bill will be out of date before it reaches the statute book.

In the first official assessment of Scotland's potential economic powers the Office for Budget Responsibility said the total could rise to around £6.4bn by the tax year 2016-17.

Under the terms of the Bill Scots would see their income tax reduced by 10p in the pound. Holyrood would then levy a new Scottish income tax, which the OBR reckons would amount to £4.4bn during 2012-13 and £5.6bn in 2016-17.

Holyrood will also receive full control of Scottish stamp duty which the OBR said could raise £328m next year, rising to £536m in 2016-17; a landfill tax which could raise £123m, rising to £157m and an aggregates levy which could raise £43m rising to £51m. These are all forecasts reflecting the view taxes will increase with the economic recovery and they should be regarded as professional speculation, because if the economy doesn't recover at the rate expected, then income will be sharply decreased.

At the moment the Scottish Government can borrow £500m to cover short-term spending gaps.  With the 'new powers' it will have the ability to borrow up to £2.2bn to finance long-term, long awaited, infrastructure projects.  Capital borrowing is expected to be capped at £230m a year.

However, power devolved is power retained.  If controlling some tax revenue is good and controlling more is better, then control of all our own tax must be best. Independence is the only means by which Scotland can control its own taxes. Devo-this-that-and-the-other isn't the answer.

Update:  Hazel has posted on this same subject.
Tweet
Posted by subrosa at 09:20

As Hazel Lewry has pointed out, it is likely that the SNP will abstain when it comes to the vote on the Scotland Bill at Holyrood. Effectively demonstrating dissatisfaction with the measures and clearly signalling that this is is the anti-independence parties' baby.

As we would surely have anticipated, the mainstream media are portraying this as a "capitulation" by Salmond. Which is total nonsense, of course. Nothing has been lost. And while what has been gained is not great it is still a gain. That'll do for me- for the moment.

There was much frothing at the mouth and gnashing of teeth yesterday among the hard-core set.

I did like the reaction of the lords though, they have been completely and totally sidelined in the most hilarious fashion. Lord Forsythe's pathetic, plaintiff mitherings are the cherry on the cake for me.

It will do for me too Peter. I'm not so sure about the SNP abstaining. After all Bruce Crawford says they have come to an agreement of sorts with the Westminster bunch.

Then again, Hazel has a good idea of the political climate.

I sat here watching some of the Lords' 'debate' pa_broon and it really was like a lot of we laddies being angry at the PE teacher.

Think the video should be on Youtube. It was a few months ago.