The weather has been exceptional this month and for the first time for many years I'm ahead with gardening chores. Yesterday the grass was scarified, fed and watered and when I'd finished I relaxed with a sherry.

Also yesterday I received an email from a friend entitled 'We're binge drinkers'.  Upon closer inspection she sent me this link which states: 'Binge Drinking - A brief time of excessive alcohol where a person has more than one drink.' She was right, we are binge drinkers because we usually have a couple of drinks during a evening. My habit is a sherry or two before my evening meal and hers is a brandy or two - completely destroyed by copious amounts of ginger ale - after her meal.

My friend insists her alcohol intake is strictly medicinal (she has heart problems). My only excuse is that I enjoy my evening tipple and refuse to allow anyone to dictate my drinking habits.

I don't support the Scottish Government's rush to legislate for minimum pricing; nor do I support David Cameron's U-turn on the subject. Lesley Riddoch, in the SoS, pedals the myth that we're a cheap booze culture. That's untrue. A can of Stella is the same price in Germany as it is here. Many wines are far cheaper on the continent than they are here. German schnapps is on a par with Scotch - it varies in price according to quality.

No, we don't have a cheap booze culture. We have the wrong attitude to booze. Too many people use it to escape the stressing of daily life instead of using it to enhance the quality of their lives. Most people drink in moderation, but no matter how high politicians push up prices, those who want drink will buy it. Will they buy less?  For those who have a problem with alcohol I think not and neither will the minimum price affect those who consume a half bottle of vodka before hitting the clubs on a Friday or Saturday.

The benefactors of minimum pricing will be the retailers. In Scotland an attempt by the opposition to scupper the government's plans for a Tesco Tax was defeated earlier this month, so the tax on retailers which sell alcohol and tobacco will become law. However, with the other hand, the Scottish government could well be returning most of the £95m which the supermarkets and large shops will be forced to pay, although an accurate assessment of the profit will only be available once the unit price is set.  The profits will also be shared with the alcohol producers, who, unsurprisingly, support minimum pricing.

Medics also support the idea, but will they see a reduction in the amount of alcohol related visits to A & Es or alcohol related deaths?  Results of the recent legislation have made little difference to what is on offer on supermarket shelves.

Until we tackle public drunkenness with the legislation we've had for years I can't see minimum pricing making a difference. Scotland is the first country in Europe to be tackling our alcohol problem with minimum pricing, so the policy has not been tested. It is based on two university research projects, one English and one Canadian.

As someone remarked to me recently, "Why don't they just ban alcohol and tobacco if they cause so many problems?"  The answer is money. Tobacco and alcohol consumption makes £billions for the Treasury. Surprisingly, the Scottish government hasn't suggested 'horror' labeling of alcohol in the same manner as is depicted on cigarette packets. Maybe the graphic below would shake us all into thinking twice about buying alcohol. 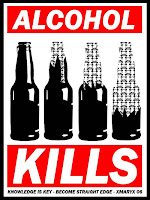 No?  Thought not. What about a little McGonagall then?
Tweet
Posted by subrosa at 09:01

If it is legal, allow it;
if it is complicated, educate us;
if it is illegal, ban it
– but stop political interference by trying to perform some crude act of social engineering.

One thing that has struck me throughout this debate is …
… the crass hypocrisy of politicians as they sit in their ‘members’ bar sipping their drinks at well below retail prices. (Subsidised by you and I, I should add.)
…the crass hypocrisy of the medical profession, like the British Medical Association, which has been an outspoken supporter of higher pricing in retail outlets. But which runs an exclusive ‘Wine Club’ which offers doctors substantial discounts well below retail prices on wines and spirits.

‘Don’t do as we do; do as we tell you’ - would appear to be their mission statement.

Just thinking, after the antics in Westminster in the last month, should an investigation be made of the drink culture of our parliamentarians, and Lords.Should they be breathalysed before entering the house and also before voting to ensure that their judgement has not been impaired by the consumption of subsidised booze ?

You actually want it to grow faster and need more cutting?

Excellent points as always JRB. It is social engineering and a crude form of it. Disappointing to see the SNP behaving in this way.

Now there's an idea Apogee. It would go down like a lead balloon in political circles of course.

I do Woodsy. I actually find grass cutting quite therapeutic. Am I alone?

We haven't had substantial rain for over 2 months now and the ground is extremely dry. Hence the watering.

I liked the cartoon:
Boy, to Father: "Dad, does this mean that you will be drinking less beer?"
Dad: "No, it means that you and Mum will be eating less".
Which nicely sums up the situation, increased alcohol prices will simply push other things off the shopping list.

Good work on the garden and the post, Subrosa. Why can't nanny have a year or two off?
I still await your response to my weather forecast and your tyre purchases. Would have helped stock the drinks cabinet!

I share Woodsy's incredulity that you actively encourage your grass to grow -- unless you hope to crop it for silage.
On-topic, I incline to the view that minimum pricing could be psrt of s solution to our national drink problem. And if you say, what problem? you are in denial.

I also think the approach in Sweden which limits the strength of alcoholic drinks which can be sold in outlets such as supermarkets and bistros
to 3.5% could play a part.

To JRB.
If it is illegal, it is already banned.
The medical profession is an easy target.
Definition of an alcoholic: a GP who drinks more than the patient.

without generalizing in scotland i think we have to change our attitude to drunkenness.yes we can quote some fellow european countries where alocohol is cheaper.in some of these countries getting drunk is looked down on and discouraged.in scotland being drunk seems to be tolerated more and in some cases seen as funny or an excuse for some behaviour. minimum pricing is possibly a start and in part is aimed at the cheap ciders and the like which are often drank by those with pretty serious alcohol problems. i do not think the were designed for moderate quaffing with a meal.

Ever since the gales blew off the the gate to the dogs run, I haven't had a lawn to speak of, just something tha resembles No Man's Land...

The best thing for the lawn is to encourage moss. It is green and soft and doesn't need any cutting yet looks like a lawn to the casual observer. I've scoured garden centres for moss feeder but it's just not available.

What you need RMcG is paraquat -- kills everything but moss.
Just don't drink it.

If they implement Minimum Alcohol Pricing, spliffs will be even better value.

As you correctly state, raising prices isn't the issue. If so, our continental cousins who can buy wine at lower cost than we pay for the sugar-water marketed as Coke, would be permanently blathered.

Even the Beeb confirms that by the above definition, "Binge-Drinking" is good for you!

It obviously saves the the NHS £millions.

I'm off to take more 'medicine'.

If we had a real democracy, an egalitarian society and a competent government, as a nation we might be more sanguine and less sloshed.

It does sum it up nicely EP.

A decade or two would suit me better OR.

OK, my response: yes you were right (as always). My winter tyres now sit in the garage because the other week I had a puncture so told the laddie just to put on the summer tyres at the same time.

There haven't been many days - perhaps three or four - where I was in need of them.

Better safe than sorry though and they gave me confidence.

Jings, I'm feeling rather like isolated looking after the grass. Surely I can't be alone Hamish. :)

I never said there wasn't a problem (at least I don't think I did). What I did say is that the current legislation isn't used. Drunks are now dumped in A & Es instead of stuck in a cell overnight then given a heavy fine in the morning. That's the way it used to work.

But of course police stations don't have cells these days.

Ah hector, we're on the same wavelength. Reducing the strength of these cheap drinks could help a little but the answer is attitude change really.

I can imagine Conan. Having had the puppy here showed me the damage that can be done to grass. My dog was male so I didn't have that problem.

It's springier too RM. :) I use potato fertiliser. It feeds anything.

I agree Joe and drugs use will increase. A vicious circle for those with problems sadly.

Yes indeed Crinkly. Then we would drink to celebrate rather than drowning our sorrows.