Another New Group. How Many Do The Unionists Need? 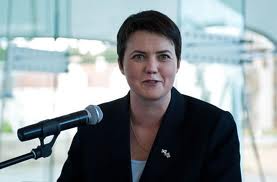 The Scottish Conservative and Unionist Party is to have its annual conference in Troon next Friday and Saturday. Is the town prepared for an influx of fearless, gray-haired Tory women who regularly make 'their' conference an annual outing?

Without these groupies I think Gerald Warner, in a scathing attack on the Tories, could be correct when he says the conference will be held 'allegedly in the concert hall, more likely in the adjoining telephone kiosk'.

Where I do disagree with him is about Murdo Fraser's attempt to resuscitate his party because Murdo at least showed he had given some serious though to its future.

At the conference Ruth Davidson (the leader of SCUP pictured), intends to launch a new group aimed at keeping Scotland in the Union.  She says the Conservative Friends of the Union (CFU) would be organised on a local government basis and anyone who shares its support for Scotland remaining part of the UK can sign up for their local CFU group, which will be launched over the summer.

What political party launches anything during the summer?  Not one which can be taken seriously.  I live in an area which used to be predominately Tory and I'll be watching closely for any evidence of a local group here.

How many more 'fight these dreadful supporters of independence' groups do Scots need?  Labour has already announced their group as have the Libdems. One of the unionists' favourite reasons for Scotland staying in the Union is "stronger together, weaker apart". If they believed that they could be a serious opposition in the campaign, but politicians never practice what they preach, so there's little chance of the anti-independence side making a marked impact.

Oh, in case anyone has planned to attend the Tory conference, the speakers at the Rally for the Union, which is to be chaired by the party's former leader Annabel Goldie, will include Ms Davidson, Secretary of State for Wales Cheryl Gillan MP and Baroness Sayeeda Warsi, who is the co-chair of the UK Conservative Party.  Surely that group of lovelies must tempt someone.
Tweet
Posted by subrosa at 09:31

It is not often than anything associated with the conservative party brings a smile to my face.

But today they had me rolling in the aisles with laughter.

Ms Davidson is launching a new group with the wonderful ambiguous acronym of CFU – Conservative FU.

… apologies for my crude and base sense of humour.

I do hope you enjoyed Warner's piece too.

What that means is:

So stronger that we can afford nuclear weapons (which aren’t ours to control), which in turn means that our prime minister can strut the world stage with people who do control things, giving him the illusion of importance.

So strong that we can hold Olympics with no expense spared, prime ministerial orders doubling costs over night on the showy stuff, so that he can play lord and master and his rich business friends can enjoy “zil lanes” through London while the rest of the people face the most extraordinary hold ups.

So strong that councils can spend vast amounts on the Jubilee (but have to pay off the people who go around old people’s homes getting them out of bed, and settling them for another day in front of the tv screen).

So strong that we can launch wars in the near and middle East, but the trains are the most expensive and worst in Europe; the roads are full of pot holes despite the tax on petrol being the highest in the world; cancer patients are being made to look for work while they are undergoing chemotherapy.

Let's be honest, all Ruth and her little coterie of elderly ladies (I'd imagine there are a few moustachioed men in checks and tweeds, wishing they were out on the moors) can offer is more of the same.

I've not had much respect for Warner since he told us all to 'hold our noses and vote Labour' to stop the SNP a few years ago.
Luckily we ignored his ramblings then and looked on bemused as he spent the next 10 years slagging off Tony 'the great charlatan' and his Labour toadies.
As usual he misses key points about the Tories in Scotland debacle. The murky behind the scenes dealings to get Ms Davidson into the Scottish parliament and then voted as leader.
There's not a snowballs chance in hell of him ever investigating that lol
And you would be surprised how few people know that Ms Davidson is a 'lesbian kickboxer'. So he's wrong there as well.

The CFU thing sprang to my mind as well JRB, its just so apt.

Turns out this 3 verus 1 issue works in independence's favour with regards to these campaigns.

Beyond that, I just don't like Ruth Davidson, her politics are odious and the way she speaks is a huge turn off. I think her ratings are as bad as they because she doesn't give speeches, she just lectures, what she thinks is confidence and surety comes over as a bit swivel-eyed and non-negotiable. I don't imagine its going down well with the tory blue-rinse brigade at all.

I think Osbourne's budget will have a few folk switching sides too when it comes. We'll what the wide-eyed Ruth has to say to that.

The CFU thing sprang to my mind as well JRB, its just so apt.

Turns out this 3 verus 1 issue works in independence's favour with regards to these campaigns.

Beyond that, I just don't like Ruth Davidson, her politics are odious and the way she speaks is a huge turn off. I think her ratings are as bad as they because she doesn't give speeches, she just lectures, what she thinks is confidence and surety comes over as a bit swivel-eyed and non-negotiable. I don't imagine its going down well with the tory blue-rinse brigade at all.

I think Osbourne's budget will have a few folk switching sides too when it comes. We'll what the wide-eyed Ruth has to say to that.

Hi SR,I don't know whether to laugh or cry after reading that.
Maybe I should go and grab an illegal
immigrant and ask him/her to remind me what is the attraction of this place?

More of the same Tris is right. Even staunch members realise the party is finished. As for Ms Davidson - none I know has a good word to say about her. They're embarrassed by the fact someone with no proven experience got the job in the first place.

Must admit RM, I became disinterested in Warner's ramblings some time ago too, but this article is a stotter. Of course he'll have to avoid certain answers. Can't upset the heid honchos too much.

Maybe you should Apogee. I doubt if many other folk will remember what it was that kept them here in a few year's time.

To be fair SR, his report on the global warming scammers the other week was very good...

Although the global warming scam spells ruin for the UK as a whole and not just for Scotland.

Doesn't Warner suggest that there was dirty works afoot to have Davidson put into parliament, presumably to challenge Annabel (whom Cameron obviously didn't like, as she was given to a little independent thought...though not the kind of "independent" we would have liked, unfortunately).

Then when she stood, (after so short a time in parliament she should have been laughed out of court), Cameron sent her his strategist (against the party's rules) to help her defeat the others... well Murdo Fraser, as the other two never had a chance.

And now one of these no hopers is the deputy leader.

BTW: Who's the deputy leader of the Scottish Liberals, anyone know?

Do they have enough SMPs

"presumably to challenge Annabel (whom Cameron obviously didn't like, as she was given to a little independent thought...though not the kind of "independent" we would have liked, unfortunately)."

Used to have a lot of respect of Auntie Bella until she tried to save her job by becoming Iain Gray in drag (as opposed to Jon Pertwee in drag (or as the Doctor)).

His article on the tories isn't bad either RM. :) Thanks for that link.

Tris, I think most folk knew there were instructions from London about Ruth Davidson.

Off the top of my head you want me to know the deputy of the libdems? ;-)

I rather liked Annabel too Forteanjo. She knew when to take things seriously. Her mistake was joining with Wendy Alexander in the Calman setup.