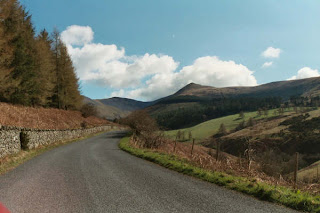 In this part of the world more and more often I read of court cases in which eastern Europeans are involved. Drink driving, driving without insurance and/or road tax and careless driving are all convictions I've read in the past few months.

Often I've wondered why so many eastern Europeans are involved in breaking the rules of the road, but now I know.

It is to be hoped that the transport minister Mike Penning takes urgent action to ensure that no more driving tests, either theory or physical, are taken involving interpreters.

Surely vital to road safety is the ability to read road signs where necessary and be able to understand the basic language involved with using the roads.  Back in the 70s I sat a driving test in Germany and had to undergo a written test and road test without an interpreter. Prior to both tests I chose to undergo a German language course which specialised in vocabulary associated with all aspects of driving and vehicle ownership.  There was no mention of an interpreter being available and the choice was simple; learn the language and then you will be able to sit the relevant driving tests.

Fortunately my new language skills made it easy for me to pass the Swiss driving tests some years later and I can't recall any mention of an interpreter then either.

Visitors to these islands have a difficult enough time coping with driving on the left hand side and many, prior to visiting, make themselves acquaint with the laws of the road.  They may have language difficulties if they become involved in some incident and that's acceptable, but those who decide to live permanently must be able to understand enough English in order to help keep our roads safe.

If English classes, which teach language associated with owning and driving a vehicle, have to be introduced then surely that would be money well spent instead of the millions paid out in interpreters.
Tweet
Posted by subrosa at 19:59

The Welsh seem to manage perfectly well with multi-lingual signs.

Watch out for Prawo Jazdy, the Polish road hog!

Is that you in the Fahrschulpanzer?

This won't effect Eastern Europeans SR. All EU residents and visitors have licenses that are equal to a UK license. And much easier to get in their own country or through the post ;)
There are websites where they can get a new truckers license or whatever they fancy getting on their license.
So an Eastern European wouldn't bother with the hassle or cost of going through the UK system.
Oh and the UK Transport Minister has no input into transport in the UK as it's an EU competence. He could try lobbying to the relevant department in the EU of course via his opposite number over there.

Joe,
Or this old story from the Grauniad:

"There were red faces in the O.S. office when its English surveyors returned from compiling a list of house names in mid and north Wales. The results contained an unusually high number of properties called Gwyliwch rhag y ci or Caewch y git, better known in English as Beware of the Dog or Shut the Gate".

We have bilingual ones in places here Joe.

Now that did make me spill my tea Brian. :)

No Brian, my French is hellish and I'd possibly need help to get inside such a big bus in the first place. What is it? Aidez-moi?

Yes RM, but they only last for twelve months.
http://www.direct.gov.uk/en/Motoring/DriverLicensing/DrivingInGbOnAForeignLicence/DG_4022561

Thanks for the links.

Another expense here is that translators are employed to help with the court case and legal aspects and yet many people can speak adequate English.


"Provided your licence remains valid you may drive in GB:

until aged 70 or for three years after becoming resident, whichever is the longer period

In order to continue driving after these periods, you must get a British driving licence."

If you have the new credit card type driving licence you will see the EU emblem in the top left hand corner with UK in the centre.

There was also the true story in Ireland {my girlfriend showed me this on a Polish site] of the police hunting a Polish guy who was renowned for breaking the speed limit in Ireland as his name kept cropping up. They were determined to catch this criminal until somebody pointed out to them that what they thought was the guy's name was in fact Polish for 'driving licence'.

SR. Forgot to say. You can send a polish license to DVLA and get a UK one instead. I've heard that some Poles do this then tell the Polish equivalent of DVLA that they lost their license and so get a new Polish one as well. Two licenses means they can then get banned in either country and still drive in either country.
Don't know if anyone does this but it's possible I suppose. In fact you could build up 27 licenses this way.

Rosie,
I thought all German driving tests were like that - "And when we come to the border ... go straight on."
The Fahrschulpanzer was based on the Leopard I chassis and was used to train Bundeswehr tank drivers. And Belgians as the clip was taken at a Belgian Army Open Day at their Marche en Famenne base. Cynical me thought a Belgian Army Open Day was another way of saying Start of a World War, but allons-y.
So that's two nations I've casually libelled without foundation. Don't know why because I know really nice people from both countries.

Ged..
That was like the story I read somewhere about the English council tax surveyor who had thousands of houses in Wales with the same names. Turned out it was Welsh for 'Mind the Dog' or ' Shut the gate'.

Thanks RM, stupid me. So why are so many in local courts here being fined for not having driving licences as well as insurance, MOT or road tax? Mind you, most cases involve the last three.

I think I read somewhere that English bus companies were hiring drivers abroad and paying for them to have tuition for the relevant tests. Thought that excellent.

Can't you tell what type of licence I have? ;)

Haha Gedguy. Now that I can believe.

There's a word for that RM isn't there? Loophole. Why aren't these loopholes sorted. Makes a mockery of those who spend a great deal of money acquiring their licence.

Does that mean my German and Swiss licences are of use now? I was told because I now longer lived in either country they were obsolete.

Lots of countries have military open days Brian. We have the Aldershot Army Show (being the biggest) and others.

BTW, tried the 'straight on' once and met with barbed wire, a couple of sentry posts and a few signs telling me in no uncertain terms that the no man's land was full of IEDs. Not a happy event.

I expect that you have the green paper license SR ;)
Keep it as long as you can because the new type need replacing with a new up to date photo ( at extra cost ) after 10 yrs I think it is.

Your German license can be replaced with a UK license. Is Switzerland in the EU ?

I expect Polish folk won't want to give up their Polish driving license so will settle for being banned from driving on a UK license that they will never apply for lol
Such is the Alice in Wonderland we now live in.

I do Brian. Good guess.

Silly me, no Switzerland isn't in the EU and I no longer hold either licence because the addresses are long out of date.

You'll be right about some of the Poles. Makes sense doesn't it.

Prawo Jazdy is Polish for driving licence which is what the Gardai were mistakenly noting down as the driver's name.

Thank you Brian. I'll keep that for future reference.