Glasgow Labour Is Not Unbeatable 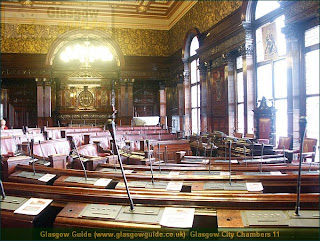 A storm in a teacup was evident in Glasgow yesterday - albeit was a mighty large teacup in the shape of Glasgow City Chambers.

Prior to the council meeting, in which the labour-run council intended to pass its annual budget, the west of Scotland political watchers and others further afield were aware all was not well within the clique of Glasgow Labour who have run the council for most of my lifetime. Rumours that the budget would fail flooded the social networks.

Recently Glasgow Labour decided some of their serving councillors weren't suitable for the job and without the approval of the respective electorate, deselected several of them. Just that that -  'Yer oot so git yer hat' kind of behaviour. After such treatment, although most resigned from the Labour party, a few still stuck with their executioners yesterday and voted for the Labour budget. Sometimes I have difficulty understanding human nature.

Watching the Labour leader of the council, Gordon Matheson, as he was interviewed after the debate was eye-opening. His relief was evident as he screeched, 'I'm thrilled.' No dignity, no understanding that the London-led deselection process will do devastating harm to his party in the forthcoming council elections in May; just delight that his job was safe for the moment.

There is the possibility that the SNP will gain hold of Glasgow council in May and the disarray within the Labour ranks will be of great assistance. Long may they stick their heads in the sand and ignore the good people of Glasgow, because it's the people who live in the city who matter - not the politicians who run the council. They're elected to serve the people and they have let them down for decades.

If the SNP can show Glaswegians that they can run their city as efficiently as they're governing the country, they will win.  That can't be such a difficult task after Labour's woeful public performance yesterday.

Update:  I'm told by Aiden Skinner on Twitter that only 5 of the 20 deselected Labour candidates have resigned or have been deselected from the party. I reiterate, why would any self-respecting individual stay with Labour in these circumstances?
Tweet
Posted by subrosa at 09:08

The death throws of any body can be sad, painful and unpleasant to watch.

We have already seen the demise of ‘Labour’ as an effective parliamentary party of opposition. Now we watch as the last bastion of ‘Labour’ control, namely Glasgow city council goes into end-stage terminal decline.

I do hope so JRB. It was sad watching Newsnicht last night to see a Labour councillor who was unable to string a sentence together. Perhaps he was overcome by being in the media, but his 'colleague' (the mouthy one) sneered at his lack of ability as if to say 'that's why he was deselected'.

Not nice to witness.

From the BBC-
Two more councillors have resigned from Glasgow City Council's ruling Labour group, after a day of turmoil saw the authority's budget pass by two votes.

Councillors Andy Muir and Ruth Black both voted against the council's budget on Thursday.

Stephen Dornan, Tommy Morrison and Anne Marie Millar all resigned from the Labour Group before the vote.
http://www.bbc.co.uk/news/uk-scotland-glasgow-west-16980679

Thanks for that info Elaine. I can't understand what took them so long though or did they need to be given another push?

Sad to say but the terminal decline of Labour looks imminent. The real question has to be , "If they weren't deselected would they still be voting through a budget that they don't believe in?". Sadly, I think the answer is still yes. They have only turned tail because they were deselected. I hope the Labour person who joined the SNP did so because he believed in their policies.

I think the answer must be yes too Gedguy.

As you observed Subrosa,"thrilled" was not the obvious descriptor for the condemned man to select as the hour of execution nears. Humility might have redeemed somewhat - but no - out and out denial of culpability.

I gather a female Glasgow Labour Councillor was allegedly threatened with her son's removal from an apprenticeship if she failed to vote with Labour - she is reported to have broken down in tears on TV as she told her version of events.

If the SNP take Glasgow in May it will be an enormous opportunity to demonstrate the converse of inadequate local administration over the decades - the SNP will be challenged as never before to iniatiate their local potential which could be extrapolated into the wider context for 2014, which considering the particular test that Glasgow will present will be crucial at many levels - but the ultimate responsibilty must be the local issues of Glasgow.

Twenty labour councillors deselected and only five have resigned? are the remaining fifteen postal voters - or as the old taunt goes has Glasgow unwittingly actually voted in monkeys with red rosettes?

One issue it does prove, the traditional political parties don't do democracy.

Taking that as a given it would at best be naive to expect any democratic process to feature in their purposes or policies.

Utterly corrupt, utterly despicable behaviour from Labour. I sincerely hope they are toast and that Glasgow can finally get a council it deserves.

It's a shame that Scottish Labour had to rely on someone from England come come here to sort the wheat from the chaff.

I wonder what his criteria were...

A storm in a teacup was evident in Glasgow yesterday

Put the dregs left on the compost in May.

Clarinda, I watched the interview with the female ex-labour councillor and it was obvious she had been threatened.

I agree with you. If Glasgow does fall to the SNP then they will have the opportunity to show how an independent nation will survive and survive well.

Democracy doesn't exist as we know it Crinkly. But then, perhaps it never has done?

Wheat from the chaff Tris? I'd say the goats from the sheep. Little difference.

I do hope so CH. It's all to play for and the SNP's to lose maybe.

I wonder if the SNP will really make a diference to Glasgow City Council.

Here in Renfrewshire, we've had an SNP/Lib dem coalition for the past 5 years, and they have been unable to stop the decline started under Labour - rather strangely they've made similar decisions to the Labour led Glasgow City Council in particular with regard to school closures.

I must say though that listening to the news on my way to work this morning, Mathieson did sound weak and had the air of someone on their way out.

We can but hope Allan.

I didn't hear Matheson on the radio this morning but I suspect he was trying to talk himself into a job. :)