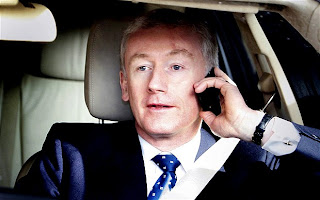 So Fred the Shred is no longer the possessor of an ermine cloak and has been returned to the masses with the simple title of Mr.

Although the MSM has been making much of his fall from grace, it matters not a jot whether he has a title or not. It's completely irrelevant, although politicians will be hoping this action somehow penalises the worst banker in British history.

What does matter is that, along with his cohorts, he still has his ill-gotten gains in his bank account and gains £2,000 a day in pension rights.

What also matters is that he has the financial clout to insist that text criticising his lack of experience in banking was removed from the FSA's 450 page report last month.

The British honours system is no longer a suitable platform on which to recognise those who make remarkable contributions to society . The nominations are mainly political and reflect little about the real heroes who keep the wheels of society oiled with their hard work. For some years I've worked for various voluntary charities, only to notice grassroots workers are ignored while the charity bosses receive the plaudits. Few people volunteer in order to receive thanks, but when they see the credits going to the people at the top, it can be irritating.

What would have been news today is that somehow Mr Goodwin had been forced to forfeit part or all of his vast pension. Wouldn't it?
Tweet
Posted by subrosa at 19:45

Er no. What would have been news is that Goodwin, McKillop and the rest of the RBS board at the time were arrested on charges of criminal negligence. Along with the board of HBOS. Soft on White Collar crime and soft on the causes of White collar crime.

He is just the scapegoat for the politicians, treasury, fsa etc and others who are equally or more so culpable for personal gain.

I agree with you Allan. But beginning by recovering a little of his gold-plated pension would be a start. Then the others could be tackled.

Indeed CH and the politicians think the issue will now vanish into the mists of time. However, there are those connected with HBOS and Northern Rock who should also be brought to justice.

I find it a very patronising gesture, as if we are all little children who will say hurrah & then forget about it.

It is patronising and a waste of time and money. I'm more concerned with the others involved in the financial collapse such as the boss of Northern Rock etc.

A K means nothing to begin with, why would it mean anything if withdrawn.

Withdraw his massive pension then I'd be slightly impressed.

Surely all this fuss over an award given in recognition of someone carrying out their salaried job rather better than expected is a bit misplaced. Others to lose their 'Knighthood' Antony Blunt, Mugabe and Ceausescu were/are in a different league surely? I'm not suggesting that Mr Goodwin should keep any of his generous awards but I would have liked to see due process so that what must be many more equally deserving culprits being brought to heel - or might that have included too many politiians and formal financial institutions? Quicker to get rid of the boy from Paisley and the debt crisis is solved in one fell swoop - at least the blame is concentrated. Where are Mr A Blair and G Brown these days - hoping for knighthoods?

Me too pa_broon and also I'd like to see others taken to task. Not least those on the FSA at the time.

What rankles with me is that I had nothing to do with the financial crisis - a saver with a paid off mortgage - and yet one of the many fools who scuppered the banks now has the same handle as me.
I suggest that a Dishonours List is started with crooks and eejits given a suffix such as "That" to identify them. Hence That Brown, That Uddin, That Blair, That Archer etc. The title could be removed by transferring all their estates to pay down the national debt.

Any money in savings is growing less in value day by day Brian.

A Dishonours List is a good idea. I think there is one somewhere but it's not often publicised.

No doubt many would like to see a few X bankers and many continuing bankers along with incompetent politicians and mandarins in high visibility jackets emblazoned with -'Community Pay-Back'- cleaning up the streets and highways of their communities?

I know I would. I wouldn't even mind if the 'Community Pay-Back' logo had 'Sir' is doing his/her (when of course the Sir would be replaced by Lady) added to it.

Should keep them out of mischief for the 5-10 years of their service.

I would like to see the civil servants and politicians responsible in a similar position Crinkly.

Do we do high-viz jackets? I thought they were against their Human Rights.

Otherwise I'd have no qualms of enforcing a night-shift on them.

Not 'pink' Rosa, they'd pick up road kill and call it sport.

Oh dear Crinkly and I thought politicians and bakers would look quite becoming in pink. Certainly the females would.

Maybe florescent green is the answer then.