Edinburgh Lurches Into The 21st Century 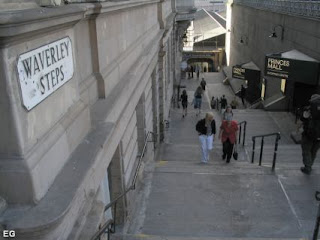 For nearly a 150 years any visitor to Edinburgh who arrives by rail has had the nightmare of dragging their luggage up the 72 Waverley Steps to escape the station.  Some (including myself) have taken their lives in their hands using the taxi ramp, but neither choice was pleasant and I know of no other main line railway station in the UK which is so inaccessible.

When I lived in Edinburgh back in the early 70s, the 'top of the Waverley Steps' was a popular place to meet friends.  The merest breeze turned into a hurricane as the Steps were a notorious wind tunnel.

Although 5 years behind the original schedule, yesterday marked a new lease of life for the famous Steps. Finally one of Edinburgh council's projects was completed and the Steps have been remodelled into eight shorter flights but half their original width. The other half now boasts three banks of adjacent escalators for the 40ft ascent and a glass roof. In summer two 16-person lifts will be completed to whisk travellers up to Princes Street.

Forty per cent of station users - 14,000 people - daily take the Steps and with this long-awaited lurch into the 21st century no doubt the new facility will attract many more. One user is impressed. 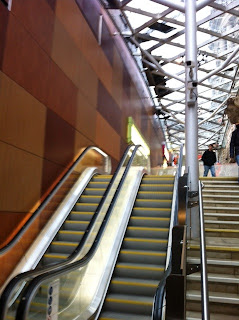 Update: I have been sent the following email by a Mr Cohen:

Your comment about taking your life in your hands by using the taxi ramp makes no sense; please correct it. Both the In and Out ramps have pedestrian pavements/sidewalks.


Mr reply was as follows:

I will amend it of course. It's some years since I attempted to exit via the ramp and all it had then was one very narrow pavement on one side. It was quite unsuitable for an older person to pull a large wheeled suitcase.

Standing at the top of the Waverley steps in a mild breeze is like walking to the North Pole, climbing Everest or sailing around the world.

It is not to be taken lightly and "steps" have to be taken to ensure your safety. A slight breeze in Princes Street becomes a howling wind at the top of the steps which makes it difficult to stand without leaning into it. I'm sure small Scottish Grannies have been blown across to Fife although it's hushed up and doesn't make the papers.

The escalators are long overdue and are a great idea. Further work may need to be carried out to at the top though. Extend the entrance out into the road with some sort of robust door access which doesn't allow straight access for the wind.Okay people will get run down in the road but that's a small price to pay.

How on earth have they managed to dodge disability access laws for so long?

Softies. They'll be putting sugar in the porridge next. ;)

TT I remember as a wee girl fighting against the wind at the top. So the wind will still be a problem? Auch well at least folk will arrive in Princes Street dry. :)

It is a good idea Brian and folk won't have to take their lives in their hands by hauling luggage up the taxi ramp.

The taxi ramps are still dangerous having used them last year during the Tattoo - I can see why people do not feel safe using the adjacent pavements.

While Mr Cohen may demand you remove the comment. It still doesn't change the fact that some people do not find them a pleasant experience.

Rosie,
The wind at the top of the steps may have been caused by the alignment of Princes Street with the prevailing wind and the massing effect of buildings on the north of Princes Street and the Balmoral Hotel plus the difference in air pressure with the Station down below. It appears that the design shoild mitigate the windy conditions: the open canopy serving to dissipate the wind rather like a hedge.

Thank you CD for supporting my comment, especially since you're such a spring chicken in comparison with myself. :)

Brian, what would I do without you? I understand the canopy doesn't quite cover the steps as there's a gap between it and the hotel. That is obviously there to mitigate the wind tunnel effect?

I certainly will use it when I next visit Edinburgh. In fact I'll most probably be castigated for being an escalator joy-rider.

I like the steps, they made what was at the top all the more worthwhile.

The option remains so I'm happy.

(And yes, the ramps aren't ideal for people with mobility issues, its also a hell of a detour to avoid some steps.)

All good, although I would have been more impressed with a funicular...

I cant understand this ,leaving Aberdeen joint station one enters a warm shopping mall with smells of coffee ,is it not the same in Edinburgh?

I like the steps too pa_broon, but they're not so convenient when you have luggage.

Doubt if the owners of the Balmoral would agree with you.:)

The difference is that Waverley is built in a 'dip' footdee and Aberdeen's not, so passengers have to be extracted from the depths.