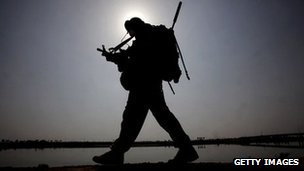 A member of the British army was shot in Afghanistan yesterday. He was from 1st Battalion The Yorkshire Regiment and was fatally wounded in an insurgent patrol in the Khar Nikah area of Helmand.

His death brings the number of our military lost in this war to 397.

Four French troops were killed by an Afghan soldier last week and Sarkozy immediately halted operations in the country, but after talks with Karzia, it was decided that they will resume training Afghan soldiers today, but France will pull out most of its 3,600 troops by the end of 2013.

Sarkozy's main opponent in this year's French presidential elections has pledged to bring troops home this year if elected. A survey, published on Thursday, stated 84% of French people supported the full withdrawal of troops by the end of this year. 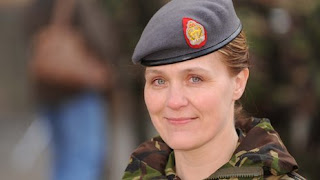 Anyone with an interest in military matters will know that the majority of the medics present in war zones these days are reservists because we no longer have military hospitals and therefore few full-time medical staff.  Lt. Col. Sharon Stewart is one of them and she is to be presented with one of nursing's top honours.

Congratulations to her and her colleagues. Without them the suffering of our wounded would be even more horrific.
Tweet
Posted by subrosa at 09:32

''Lt Col Sharon Stewart, from Sowerby, has been singled out for her efforts in making Afghans feel less isolated at the British military hospital where she served with the Territorial Army in 2011.''

Good for Sharon she has obviously taken her task to hand & did it.

However I think they are all being taken a loan of & the real purpose is to build a gas line & exploit mineral deposits.

I don't believe you can change a society from without, it needs to be changed from within. Invasion will not do that.

A lot of people have died for nothing apart from commercial interest & the vanity of politicians who apparently have never read a history book in their lives.

Don't disagree with you Observer but also there are many who have self interests in war and all that goes with it.

Afghanistan will be back to the way it was before 2001 in about 10 years.