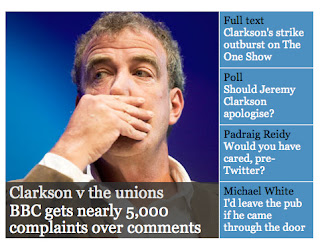 The image is from the Guardian: outrage from 'nearly 5000' who complained about Clarkson's comments on a magazine-styled television show last night.

I don't watch The One Show because it's not my cup of tea watching celebs promoting themselves and there's no celeb better at promoting himself than Jeremy Clarkson. The man makes a very comfortable living - aside from playing with fast cars - at being provocative and, to be fair, he's quite good at it.

This blogger assesses the hysteria surrounding the latest Clarkson outburst in his usual sensible and eloquent style.

At times I'm grateful I am of a certain age, because, if memory serves me well, I'm quite sure I threatened my family (when they were young) with 'I'll shoot you if...'  These days I could well have a criminal record and a large fine or prison sentence for uttering such rhetoric. Oh for the days of yore when your every utterance wasn't policed by the Righteous.

Of course the overpaid, self-serving union leaders may have forgotten the following when they launched their latest rants. 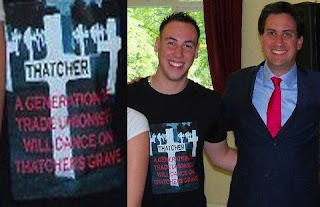 I'm told by tweeter @allandssmith (who supplied the image) that the photograph is genuine. Where was the moral outrage then?
Tweet
Posted by subrosa at 19:44

SR, this entire 'furore' over Clarkson demonstrates how juvenile we, as a society, have become that we become involved in what is a nothing story.

The man makes his living by being controversial - grow up Britain!

How many times has anyone uttered the words about any group/politician/quango/local bureaucrat; they should be taken out and shot?

The phrase has become a 'saying' in our language - fortunately, when it was first introduced we did not have the PC brigade to create a fuss........!

Wasn't Mr C just advising they should be shot (as in photographed) in front of their family?

Has someone misunderstood his meaning?

Never mind a generation of Trade Unions, most of Scotland will be dancing when that woman goes...

He is an idiot for lots of things, not just what he said. The best thing that can be said about Clarkson is that at least he isn't in a position of genuine power... unlike someone else with the ability to insert one's foot into one's mouth with alarming regularity... Boris Johnson.

wonder what the Cybernats would make of a 'TRUE' Scottish patriot who was to say.

The strikers are at least taking part in an ordinary industrial action and unlike Alex Salmond and the snp do not wish for ending of the United Kingdom.

Call me a politically correct posh boy, but I thought it was great humour for the village pub in Chipping Norton, with his posh friends Dave, George, Rebekah, Andy (the other bit of rough) and Murdoch junior.

But on tv, at 7.00pm when kids of strikers might be watching, and too young to understand that the nasty old man doesn't really mean it and it's just grown up humour.

He reminds me of Russell Brand and Jonathan Ross, although, the difference is I actually like some of his shows, because in the right setting he is quite funny. At least Clarkson can drive.

I'm sure that Jeremy doesn't really think that people who work for the state should have their terms and conditions reduced because times are tight through no fault of theirs, on pain of being shot in front of their families if they protest.

After all he is paid out of licence payers' tax, and rather handsomely too. Given that his friend has frozen the BBC's money maybe he'll be getting a pay cut next year?

Would't it be awful if Mrs Clarkson and the little Clarksons had to watch him being shot?

Yet some insist our formal education standards haven't diminished WfW.

I do despair at times.

That woman saved me a wee bit money Allan, because the poll tax suited my circumstances at the time. I do know she's detested in certain parts of Scotland and understand the reasons. Such a pity a clever woman like her didn't replace the lost industries.

Nothing to say about your Great Leader adding himself to that photo Niko?

Tris, as I said in the post I know I've said that in the past to my own. It's perhaps tasteless but it's hyperbole.

Mine knew fine well if I said they'd be shot for something that I was really rather angry with them and they'd crossed the fine line.

As far as I gather he was talking about union bosses in particular, then I may be wrong because I didn't see it myself.

Has the day gone now when little boys play with toy guns and shout 'bang bang'? How sad they can't be allowed to play without someone saying it's wrong. Every child knows it's wrong to hurt another person, they learn that very early.

Our freedoms are being curtailed bit by bit and I'm quite glad I won't be around when we're all like automations - too afraid to say or do anything without the permission of the Righteous.

The footage which went viral on the net just showed him saying that he thought the strikers should be taken outside & shot in front of their families. I did wonder if he was perhaps drunk or something because the majority of people involved in the strikes were women & it seemed a very testosteroned up comment to make about women. I think it was that cut of the interview that caused the offence, because when you viewed the whole thing it was a rather feeble joke.

There was a great comment on the Guardian telling all the Guadianistas off & reminding them of the rather glorious moment when Max Keiser said on British TV that it was time to hang some bankers. When the presenter assumed it was a joke he said that he was perfectly serious. What's sauce for the goose etc. If those of us on the left can enjoy Max Keiser being outrageous then we just have to suck it up when Clarkson does his ultra conservative stuff.

But Max Keiser is far far better at what he does.

There is quite a neat picture on Bella Caledonia of Maggie with a gun to her head. But it's just a joke of course, just like Clarkson......

Some sour old Union hag called Jennings said Clarksons words were "incitement to hatred" so, if she were in charge, no doubt he would now be under arrest simply because she has no sense of humour or irony.

"Alex Salmond and the leaders of the snp(for attempting to destroy a Nation) sholud be "executed in front of their families"---Gosh Niko and heres me thinking he is trying to rebuild a nation .

You are a politically correct posh boy!!

It's a joke of course,just in case any other person has lost their sense of humour.

Clarkson is passing this off as joke perhaps it was a silly joke ,but behind it is the thinking of Clarkson ,typocal of the loudmouth saloon bar bore,---remember when he said "back in England we have this one eyed Scottish idiot"---the English media passed that off as a "joke" but replace Scottish with English and the media would have been howling.---he even had the affrontry to pretend it was`nt rehearsed ,he got away with it then and now will still collect his £1m a year from the BBC-----the labour politician on question timr tonight summed up clarkson well as a no talent publicity seeker------from the stand point of Clarkson`s bigotry ,many a true word said in jest.

I find what Clarkson said to be far less offensive than the so-called jokes by immature comedians about people like Andrew Sachs, and more recently about disabled and Downs syndrome victims, which the BBC vehemently defends as "edgy" humour, regardless of whom it upsets.
Incidentally, I prefer boiling in oil to shooting!

Thanks for explaining what did occur Observer.

The man's a fool but an educated fool. He's part of the BBC luvie scene and employed as a 'right-wing' voice, albeit a rather poor one.

He doesn't deserve the recognition he receives, but that's just my opinion.

Aye saw that one too Observer.

The next stage is when humour per se is no longer acceptable.

The scally with the t-shirt (and the photo is genuine) is Kier Morrison, Guido picked up on it here, and Ed Milliband's 'apology' was covered in The Mail:

"A spokesman for Mr Miliband said yesterday: ‘Mr Miliband had no idea that the man’s T-shirt had that slogan on it. If he had done he would not have had his picture taken with him."

I agree Michele. Sadly the stooshie it's caused will further curtail freedom of speech.

Footdee, Clarkson's PR folk will be absolutely delighted with the outcome.

The man's past his sell-by date but this will keep him going another few years.

I do too EP. Modern comedians humour doesn't do a thing for me.

The press see an opportunity to stoke up some rightious indignation knowing that it sells papers and increases web page hits.

On The Jonathon Ross/Russel Brand/Andrew Sachs thing: The BBC said it had received 'thousands' of complaints about it and the press reported it with glee. Only the BBC didn't receive thousands of 'complaints' it received thousands of 'comments' on its Have Your Say page and even skimming those comments showed that a good portion of them were people say Meh: storm in a tea cup.


And so it is with Clarkson, he's a cartoon character, a TV presenter. What he said on the show was (I was watching it, erm, channel surfing, I don't normally... Ummm...) He was asked if he supported the strikers, he said he did, enthusiastically, he then went on to say 'This is the BBC, we must have balance...' and jokingly made the comment about having them all shot/executed.

It was a joke, not up there with the best of them but it did ring true on so many levels because we know the BBC is anything but impartial or balanced.

Obviously though, the usual suspects and certain others involved so it as a band wagon onto which they could hitch their own various agendas.

Thank you PJH, I appreciate your confirmation.

Meh. Pa-broon, you ought to have written that post, not me. You seem - very inadvertently - to have seen the programme.


Business as usual right enough from the Beeb and it's luvies.

Oh, I totally think he read it, found it funny, but didn't actually realise the repurcussions of being photographed next to someone wearing it or how widespread such a photo would go.

Hence the statement. Apologising for being photographed with it.

You're very probably right PJH, but it does show his naivity.