Scotland: The Singapore of the North? 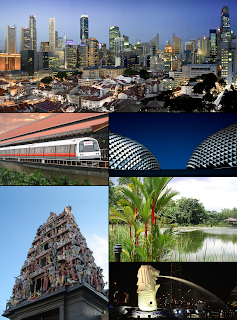 Guest post from Brian.
I hope Rosie’s Scottish readers won’t mind an Englishman offering his opinions on the future of Scotland.
I take the view that if the majority of Scots wish for independence then they should take it: sovereignty is not dependent on the consent of others. Equally, if England decides that the former United Kingdom requires retrenchment to the line of the River Tweed and Solway Firth that too is valid.
Much hot air is expended over the argument that Scotland would or would not be financially self-sustaining. The argument revolves around the structure of the present day Scottish economy. But as independence is a future aspiration, it makes more sense to set out what kind of country and what standard of living Scots desire and plan backwards from there.
It has been done before with considerable success in the Far East. Since gaining independence from Malaysia in 1965, Singapore (Please click through the link and read the Wikipedia article) has increased its per capita income from $511 to $42,000 by investing in its people’s skills and making business easy. Of course, no economy or system of government is perfect but Singapore, with some adaptations to the Scottish way of life, is, I suggest, a model to be seriously considered. It’s so good that I want England to import and enact the successful lessons it has developed over only 46 years.
Independence, standing on one’s one two feet as a nation, is a difficult task but those Scots who have travelled around the world with such success will tell you that any journey is possible with a good map. It’s in England’s interest for an independent Scotland to be successful because we can sell you more stuff.
Good Luck and Bon Voyage!
Tweet
Posted by subrosa at 09:31

Singapore is (a) practically a police state and (b) adopts a very laissez-faire approach to business.

I would guess that most Scots don't want the first, and that the SNP definitely doesn't want the second.

Much more likely is rule by a vaguely-benevolent we-know-what's-good-for-you endlessly meddling bureaucracy, combined with a high-tax, high-spending, high-borrowing, heavy-regulation anti-business environment. Oh, and very high energy costs due to the insane committment to "renewables".

Singapore you won't be. East Germany without the German efficiency and hard work, is more like it.

This is not my doing, of course, nor do I approve or disapprove, I merely foretell based on the rhetoric we hear.

I have lived in both Scotland and Singapore - and somehow I think this is a great dollop of wishful thinking.

While I want to see Scotland Independent (the sooner the better) I think these kind of 'pie in the sky' scenarios are merely setting you for disappointment. Instead of being Singapore in the North, why not be a more vibrant and detached Scotland; and why not do it soon.

An independent Scotland will, within 48 hours, have their hands out for European 'grants' and assorted generous benefits. The SNP will promise to be a good member of the EU in that all rules and regulations will be applied thoroughly and without question.

(Yes, the hand will go out however much oil they think they own and can sell, for 'renewable' energy will soon be seen as more desirable and 'vote-winning.')

The Scots will plead, and perhaps accurately, that they are a small fairly impoverished country (think Estonia) and therefore deserving of extra handouts from Brussels. England, as a wealthier nation will, like Germany, contribute but unlike Berlin the current weasels in London (whether Tory-Labour or Labour-Tory) have very little say in what happens in the newly formed Scotland.

From then on in Glasgow, Edinburgh and environs it will be more regulation, and more claims for handouts to enforce them. Alex and his cronies will finally be presidents, etc, and bask in the attendant glory of having their faces on stamps and Euros in their banks accounts.

South of the border, Westminster will lose a large number of Labour MPs which many would say is no bad thing. After that, knock yourself out. Enjoy.

I'm not keen on having Singapore style government here either, but nor am I keen on Westminster rule.

What does Westminster bring to Scotland? Let me think... Oh yes: "Much more likely is rule by a vaguely-benevolent we-know-what's-good-for-you endlessly meddling bureaucracy, combined with a high-tax, high-spending, high-borrowing, heavy-regulation anti-business environment. Oh, and very high energy costs due to the insane committment to "renewables"."

Just what I was going to say.

Scotland will be a good deal better off out of the union even if it remains in Europe, the facts back that up (GERS for one.) The question is whether we have the guts & guile to grab it; I think we do.

There is nothing wrong with the English people but a hell of a lot wrong with its choice of government. It seems to me in Scotland we have a fourth way: Independence. England on the other hand, unless its people do something about it is doomed to more of the same.

A far smaller population, a younger more accessable parliament, the ability to move faster in the world as opposed to the vast creaking Westminster edifice?

I think it'll be England that falls backwards towards an East German model, not Scotland. In a sense, its all up for grabs, Scotland's natural resources (over £300 billion in oil & Gas alone) plus the renewables is not to be sniffed at unless you're a unionist in which case it seems to be worth everything and nothing, Westminster couldn't possibly admit to the former so press the latter.

Tha games up, the union is a dead horse, you can flog it all you want but its going to the glue factory.

Unless of course anyone of a unionist slant cares to supply a positive argument for remaining...

Having some experience of Singapore, I would suggest that Scotland is capable of being better than Singapore.

My worry would be that the Scottish government, like the governments of Singapore, Norway etc , would be infiltrated by the CIA and its friends.

The CIA has a major base in Singapore, reportedly.

Michele, there is no reason why Scotland could not be as successful as Singapore given the will and the means to do so. As extra bonus from Singapore's example would be clean and tidy streets.

John - yes clean streets etc, etc, but at what cost to democracy? Are you happy to go down that path? I was living in S'pore during the Lee Kwan Yew days and it is not a scenario I would wish to see in any nation.

Many thanks for all your comments.
And many thanks to Rosie for giving me the opportunity to guest post and air some blue sky thoughts on the future after Scottish independence.
I have to say that I believe an independent Scotland will benefit from the energy and self-confidence of new countries: indeed the second velvet divorce may even reinvigorate England.

I only said that Scotland could be as successful as Singapore - I made no comment on democracy or the lack of it. I hardly think that we, at present, live in anything like a democracy.

Yoohoo John. I have to agree with you there. Democracy is being gradually redefined along with other words in the English dictionary.