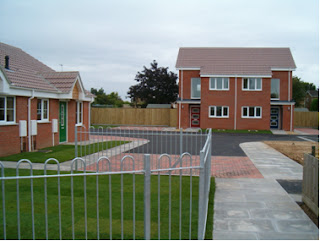 As with everything in life, nothing is simple when you need a committee to make decisions. Then, when add in the 'strange' tenants who go about destroying their(?) homes with vigour and no idea of building techniques or regulations you end up with the state of the housing that we have at the moment.
What is the answer; I haven't got a b****y clue. I agree with the principle of social housing and thought that Maggie's destruction of the social housing policy was a political and financial move that should never have been allowed. However, a lack of proper repairs and the social engineering of build 'em high and cram them in' was a complete and utter failure. At a guess I would say that those architects would never dream of living in the types of housing that they were forced [by the cash strapped councils] to design and build; so why were we forced into this?

I have the privilege and good luck to live in beautiful rural part of Scotland.

However, gross under provision of - starter / affordable / first- time / council housing / rentable / ‘call it what you will’ housing / - has resulted in great swathes of our young people leaving the land of their birth and having to head for the big cities to seek a new life.

The net effect has been to make the Highland Clearances look no more brutal than a Sunday school outing.

This results in a rural population made up entirely of the middle aged and elderly. On the rare occasion that a young family is seen, it can be taken as a sure sign that some elderly person has passed away, thus releasing a property.

Now we have developers appearing building new houses which only the middle aged and elderly can afford. These ‘developers’(?) are supposedly obliged to build a small percentage of starter homes, but these are always the last to be built, and then, only if all other houses in the development are sold.

Planning / forethought / common sense / - hasn’t been a feature of rural housing policy for a generation.

The problem with the housing market is that it's used as a means of making money rather than making homes.

It really is as simple as that.

Gedguy. Even now some of the council efforts haven't delivered what they should have. Councils shouldn't build houses they should contract builders to do it. Some do some try to do it for themselves.

Things are improving but it was a very low starting point.

The last house I bought was as investment and was in a very up market development. How upmarket? I'm quite sure two of my neighbours were drug dealers with money to burn.

By law the estate had to have some affordable houses. They were built last on an odd piece of land and everyone on the estate howled and complained about it.

No one has come up with an answer on how to achieve the sort of social mix which will work as things currently are.

Second homes drive up the prices and locals find it difficult. Bottom line though JRB is young people just can't get mortgages. This will bite us all in the future.

Well RantinRab you're spot on. Not all countries manage this though. lots of countries have huge rented sectors which provide homes at reasonable costs.

In rip of Britain though we have everyone in the chain having to have a bite meaning the last link pays for all their profits.

"Councils shouldn't build houses they should contract builders to do it."

Build a nations democracy and the houses and homes will follow,

Democracy at a local level should be achievable. Localism would provide the controls necessary to deliver the right kind of housing for the local area.

There is an obligation on most Housing Associations to carry out an ''annual visit'' to check up on the tenant & update records, that would of course identify the tenant who has decided to knock down walls & do other bonkers stuff, or perhaps exist in alleyways constructed by newspapers surrounded by beer cans. Sadly not every HA is resourced to do that, but it is a good idea.

It's not something I come across very often. Resourcing is an issue and there is also an issue with who is responsible. Repairs/Direct Works/scheduled repairs v Housing/Admin/Customer Service/Neighbourhood.

The tenant is supported from a financial management point of view as this is easy and the regulator measures debt collection etc.

You are right. It should be looked at cyclically, even if it's just a percentage sample. I suggested to one association that they ask the various tenants asociations to keep a look out for skips, building detrious and tradesmans vans. Not sure they did though.