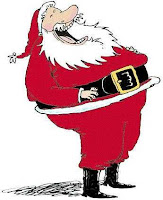 A post by Tedious Tantrums
Dear Santa,
Hello Santa. It’s been a few years since I last corresponded with you. I say corresponded although in reality it was all one-way traffic. I wrote and asked and you delivered, up to a point anyway.
I enjoyed the red and yellow fixed wheel Triang tricycle with the solid tyres you brought for my 4th Xmas. I was also particularly keen on the huge crane for my 7th, the gun that shot round corners for my 8th and Tommy Gun (down market version of Action Man) although his orange facial colouring may well have been ahead of it’s time.
There were many other presents, which I also enjoyed. The pretend shop with it’s own wee till and the pretend post office with it’s stamper could be enjoyed for hours at a time. Meccano and Lego were equally splendid as was plasticine. Spirograph had it’s moments along colouring in books, sticker book rub on transfer book thingies, painting by numbers and plastic moulds for making plaster of paris figures could also be entertaining but probably only the once. Other oddities, included bagatelle, home knitted jumpers or socks or gloves, pyjamas, slippers etc. didn’t quite hit the spot.
The Broons, Oor Wullie, The Beano, The Dandy, The Victor and The Rothmans Football Year Book were all very acceptable for reading material. And the copious amounts of chocolate from selection boxes.
All in all Xmas presents were pretty damn fine. Well done you Santa.
In later years things became a tad more sophisticated. My Timex watch, which showed numbers rather than having hands and a face, was a wow moment. I didn’t realise that buses didn’t run exactly to the timetable until I had that watch. There was also a pen, which could produce about ten colours of ink although it was fairly bulky. A full size drawing board complete with set square, those clear plastic triangles and a proper compass and dividers was used for years.
Music albums, cassettes CDs, music players of varying sizes and sound quality, cameras of varying size and quality although it was rare that the films were ever developed because it wasn’t cheap.
Yes Santa you did me proud.
I’m offering a deal here. I’ll not write to you again, ever, if you deliver the following requests? I’m sure this would save you and the elves time since it would reduce the metal bashing, wood turning and electronic soldering which modern day elves have to be experts on.
My list this year is –
I have many other similar requests Santa but I think these five should “hit the spot as it were”.
I shall ensure that a drink, a cake and a carrot or two are left out for you and the reindeers when you make good the delivery of the aforementioned items.
All that is left to say is “have a restful time following your busy evening on the 25th. I hope your New Year is jolly good and all the better for knowing you will have one less delivery to make from now on.
Bah humbug!
Tweet
Posted by subrosa at 09:03

May I suggest 2. be amended to wishing they pay full tax obligations in the UK?

Admirable as his seasonal requests may be, their resolution lies, not with you Santa, but with the Jacob Marleys and Ebenezer Scrooges of this world, perhaps the Spirit of Christmas will help them change their ways.

TT’s ‘bah humbug’ is but an illusion, deep down inside he holds fond memories of Christmas’s past; and in addition he shows evidence of splashing out at Christmas time by offering you both a drink and some cake.

So, if you please Santa, can I suggest that, rather than his requests, this year you bring TT a bottle of Absinthe. Once ‘La Fée Verte’ comes calling, TT wont give a tuppence for the BBC, the EU or anything else and will have - A Very Merry Christmas.

Its all me me me with you isn't it. All the presents you got as a bairn then a list of yet more wants.

It just underlines the ridiculous want-fest that is Christmas these days, John Lewis would be horrified, for them its about giving you know. (Even if it is the boys dead sister's head in the box, that's why the parents look so worried...)

Shocking so it is, just shocking. Not as shocking though as the visit you're getting from the Grinch (whatever that is) for daring to question the global warming thing, definitely getting a visit from the damp (sea levels you know) ghost of xmas future...

PS: I wonder what precautions Santa takes to avoid all the new wind turbines that are being thrown up? Rudolph the red nosed- Uh oh, not any more.

I'd ask Santa to scrap the BBC tax but let the BBC do their own thing as I wouldn't be paying for it anymore. The Gruinad doesn't cost me anything so I'd let them go on losing £45m a year or whatever it is. Probably more when the BBC can no longer afford to advertise in it.
I'd get Santa to knock down all the useless windmills with his sleigh as he flies past and to stop any presents for people who continue to support the great global warming scam and the EU scam.

All I would ask of Santa is he leaves a pic-n-mix back of sense with every delivery.

I wish everybody who and wherever you are all the best and a few days of tranquillity.

Glad to oblige OR. A longer list may well have addressed that for all those wealth creators who feel operating from overseas is morally correct.

Of course we could all make our views known by not dealing with any business which does not operate responsibly. Mr Branson are you listening?

Bah humbug indeed JRB. Tragically I do not partake of any alcoholic substances. This may increase my bah humbug levels.

Don't get me wrong I'm more than happy with everyone else drinking as much as they see fit.

Isn't goo that we are all individuals.

Well Pa I'd like to claim I live on the edge but the closest I get is to teeter at a safe distance.

I was talking to Santa just the other day and he mentioned windmills. It took him a good while to get his composure back due to all the laughing etc. The man is on the case.

Santa hinted he may even make a special delivery this year straight to Huhne the loon. Something about points on a license?

I agree with you RMcG. Well almost.

The Guardian and the BBC try to influence things they shouldn't and don't even have the courage to come out state their position.

Not to worry. Me thinks there may well be more visits for Santa this year or he may delegate to the Constabulary to feel the collars of some of the Guardian staff re NOTW.

Not that I would take any pleasure in that!

I wish you a lovely and enjoyable Xmas and New Year break.