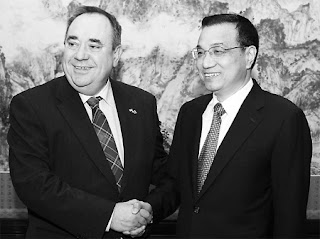 The biase of the BBC was evident in all its glory on Radio Scotland's Good Morning Scotland yesterday morning.

It was an article from Newsnet which caused me to listen to the interview on the BBC iPlayer (starting 2:11:50) when presenter Gary Robertson continued to press the First Minister on the issue of human rights in China. The following question was not appear to have been asked of the Prime Minister during his trade trip to China last month.

Robertson: On the issue of human rights how much should that go hand in hand with any trade deal with China?

First Minister: I don't think any serious person - certainly not the BBC since you're extremely active in the People's Republic of China - is suggesting that Scotland boycotts the second largest economy in the world...

I was discussing this on a post a couple of days ago with a Liberal who was insistent that Mr Salmond bring the topic up.

I pointed out that Mr Cameron had brought it up with the Chinese, and had been told very publicly (and humiliatingly) to mind his own business.

What then to do? Do you say, well, that's it, we're not having anything to do with you, China, thank you very much... or do we swallow our pride and pretend that we haven't just been made a fool of.

It was suggested that the SNP wasn't too hot on human rights, citing Calder as an example.

But the invitation to discuss the Liberal/Conservative ban on public protests during the Olympics, or the outlawing of protest near the Houses of Parliament wasn't taken up.

I wonder what Liberals would make of the UK government's relationship with, for example, Uzbekistan and the child cotton pickers.

We all know China has an horrific human rights record. Scotland's challenge to it won't make a tiny bit of difference. I imagine that Mr Salmond is aware of our distaste for some of the things they do, there and elsewhere... but in the end, we have to make up our minds...do we want the trade deals or not?

It was the tone of the questioning too tris that I found disturbing.

I wonder how many of those who criticise own products made in China? Pots and kettles.