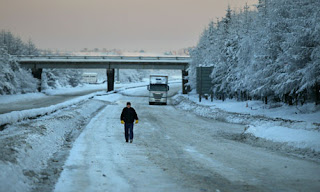 This post may read like a public service broadcast but I make no apology. After the last two winters here in Scotland 'Every Little Helps' as a supermarket insists.

The Scottish government has very clearly learned from last winter when the main motorway between Edinburgh and Glasgow ground to a halt for hours, leaving many motorists stuck in their vehicles with no food or beverage and more importantly, little idea of driving in such conditions.  The public were warned of the extreme conditions but many ignored the broadcasts or decided not to listen to them in the first place.

The result of last year's gridlock in the central belt?  The resignation of Stewart Stevenson.

His replacement, the ex-marine Keith Brown, isn't going to be found lacking in communication skills this year and has introduced a detailed package to ensure motorists, as well as public transport, have accurate, up-to-date information to allow them to plan and amend their journeys in the event of sever weather.

Knowing that all this information is available 24/7, there is no reason whatsoever for motorists to travel unless their routes are clear. Human nature being what it is, of course there will be those who ignore advice but they deserve to be left stranded.

I still think the Scottish government should create some scheme to ensure that all drivers in Scotland fit their vehicles with winter tyres between November and March.  Not only would such a policy create employment in the short term, but it would also ensure people like me, who has done so, feel much safer knowing that others on the road have the same grip.  There will be many who say they can't afford winter tyres and I understand that, but when they trade in their car they should be able to achieve a price which includes their expense on the tyres, minus depreciation. Such a policy would or should reduce insurance premiums and if not, why not.

Now I've finished my public broadcast, I have to find a solution to quickly getting rid of the condensation on the inside of my windscreen.  The other night I sat for over five minutes waiting for it to clear and that was after doing my best with a wad of kitchen towel.

Oh the joys of winter travel. Never mind, in another couple of months we'll be on our way to Spring.
Tweet
Posted by subrosa at 09:29

Were winter tyres to become compulsory, economies of scale would presumably allow the price to drop.

At the very least, winter tyres (and possibly driver training for winter conditions) should be required for anyone who uses their own car to provide a vital service; recent heavy winters have caused great hardship to people relying on carers or medical staff to call several times a day.

I can't think why the Scottish government don't plug into winter tyres Macheath. Yes I understand folks don't have much spare cash but they would recover part of their outlay when selling their car, plus the benefit from safer motoring.

Is the winter tyre internet shop yours, Subrosa?! Only kidding. They are a good investment.

Its one thing to say people deserve to be stranded after choosing to ignore information regarding traffic prevalent conditions, however many people have no choice what so ever and will have to travel regardless.

Because there are very few employers in Scotland who are going to pay their employees a wage for sitting in the house due to weather conditions - such are the harsh realities facing the vast majority of the working population in Scotland.

Other than that - I can find no other critique in your excellent synopsis.

Many insurance companies regard winter tyres as a customisation and will not settle claims unless they are told when you fit them.

It will probably involve a premium hike.

Wish it was Oldrightie. :) I'm just on a campaign to get the roads safer in winter.

The employers in this part of the country were mainly understanding BD and didn't expect everyone to be in on time, although I believe most expected 95% to make the effort sometime during the morning.

That's true Rab. I must put a wee note at the end about it. Direct Line didn't charge extra as I told them I was making the car safer.

Rosie,
There are two ways to cure the condensation problem: increase air temperature and decrease the moisture content of the air. So long as the temperature of the inside of the windscreen is higher that the dew point temperature of the air inside the car, condensation won't occur. Dew point is the point at which air at a given temperature can no longer hold any more moisture, ie 100% Relative Humidity or saturation vapour density. So you could either turn the heater up to tropical house levels or remove excess air moisture by checking for leaks, drying out carpets, absorbing moisture with silica gel sachets and turning the air-con to fresh air instead of recycle. Any of those tips is better than spitting on the inside of your face mask which works when snorkelling.

Following on from Brian's excellent tips, if you've got AirCon, turn it on whenever you've got a misty windscreen.

AirCon isn't just to cool the car in warm weather, it de-humidifies in all weathers.

have gone for a subaru with 4WD and low ratio. will see how that works and let you know. How long do you think winter tyres last? My understanding is not long.

Here's some advice from experience: if your windows mist up heavily, it is probably because you have excess moisture in the car. In my case, it was a window leak that had saturated the carpets in hidden areas. Aircon and turning up the heater will help, but not cure it. Only permanent cure is a) find the leak and stop it, and b) get the inside of ther car completely dried out. Dry, windy day, all doors open as long as possible. If not, put a small 240v fan heater inside on an extension lead with one window open, and leave overnight. Long story short, the inside of the car must be bone dry.

If you buy 4 cheap steel wheels fitted with snow tyres & have a shed to store the other set, the reduced wear on your summer tyres if you keep the car for 3-4 years should balance out the cost.
Snow tyres are much more effective than winter tyres - winter tyres are designed for cold / wet,why not a compulsory insurance premium on any new car sold with summer tyres?, that would boost all weather tyre fitting.

Oi!!! - Us "informed" drivers South of the border have enough difficulty getting winter tyres as it is - don't make it any worse...

As to the other points raised, I have suffered from excessive condensation but tracked it down to a small water leak around the windscreen rubber allowing the carpet and underfelt to become soaked. Silica gel won't deal with this amount of water - finding and curing the leak, followed by removing and drying the affected items is the only solution.

Winter (as distinct from Mud & Snow) tyres don't wear appreciably more than normal ones, in my experience. They usually have just as much rubber in contact with the road, unlike the open, block treads of "Mud & Snow" tyres. These were great for ploughing across fields, but not much better in snow or ice. "Winter" tyres, on the other hand, have a different compound (usually involving extra silica) which remains flexible at sub-zero temperatures. Even this won't help much on sheet ice, but on snow they are a hell of a lot better.

I speak as a driver (and motorcyclist) of 35+ years experience, who has used various types of M&S and winter tyres all this time. Another bit of advice (for what it's worth) - those wide, low profile tyres that make your car look "cool" are completely useless in winter. They aquaplane easily on slush, and are as much use as a chocolate teapot in snow. Just think - when did you last see a Citroen 2CV stuck in winter? Look at rally cars on winter stages - they also change to skinny tyres...

Would not a lot of the problem dissappear with proper snow ploughs to sweep the roads instead of modified trucks with immitation bulldozer blades.
And how many people lost control of their car when the ABS cut in unexpectedly in snow and the driver lost control of their brakes. ABS is not always a saviour.

Brian, many thanks for the information. I've checked for leaks but can find none. Carpets are dry but I think there must be a tiny leak getting in through the windscreen. Never had a car with such condensation.

Joe, I've my handbook sitting here to ensure I use the aircon correctly. Seldom use it really.

Brian SJ, I'm told they last about the same as normal tyres but of course depends on how the vehicle's driven.

The garage had a look for a leak and found nothing Richard, but the cure is to put the car in the garage and not leave it on the drive. Saves me scraping ice too.

Do remember that the law is an extremely blunt instrument to be used a a last resort, not a first one. Prescriptive solutions such as snow / winter tyres are particularly problematic in law. London hackney cabs are still supposed to have a bale of hay in the boot for the horse.

BrianSJ, Not the Section 51 London Hackney Carriage Act 1831 again. It forbade feeding horses in the street except with a nosebag for oats, etc and by hand with hay. Cabbies can't wee on the streetside rear wheel of their cabs by virtue of the Police Town Clauses Act 1847 either.

That's exactly what I've done Nessimmersion, bought 4 wheels for the tyres. It saves me the cost of having the tyres changed twice a year at £40 a time.

Now that's an idea re insurance. Thanks.

Ooops, microdave, I was really speaking about Scotland only in this instance. :)

I've never used winter tyres before in my 48 years of driving but I have used snow chains often when living in Europe.

You're right about these wide tyres though. A few years ago I know someone who bought them thinking they were 'cool' only for him to discover within weeks they had no grip at all.

That happened to me once Apogee. Now I drive using gears in bad weather.