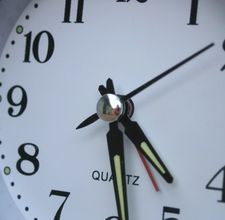 I didn't expect to become involved in the near yearly London based call for a change to our long established annual clock changes until I read this.

According to the head of the UK's leading accident prevention charity us Scots are 'English bashing' because the First Minister has said there's no evidence to suggest that any change would be beneficial to us Northern Britains.

Tom Mullarkey, the boss of the RoSPA said the issue had become a 'hook for Scottish nationalism' - how condescending and ludicrous.  I wonder if Mr Mullarkey - what an appropriate name - has ever lived in Scotland. Somehow I think not.  Mr Mullarkey insists that the Daylight Savings Bill would have even more benefits for Scotland than the rest of the UK.  Oh dear, he's digging fast.

Between 1968 and 1971 the UK introduced what is now referred to as European time but the analysis of data for the first two years of the experiment indicated, while there had been an increase in casualties in the mornings, there had been a greater decrease in casualties in the evenings, with a total of around 2,700 fewer people killed and seriously injured during the first two winters.

Mr Mullarkey is more than welcome to come and stay with me in the depths of January, because I very much doubt I would enjoy his company during the Scottish Christmas and Hogmanay.  He will see for himself the effects of dark mornings in a nation which is deprived enough of sunshine.

Decrying the Scottish government's opinion won't endear many of those north of the Pennines to his cause.
Tweet
Posted by subrosa at 19:22

You should read the Torygraph on the matter Rosa, much fun to be had...

Mmm,another all the scots are against it.
Points:
The same amount of daylight no matter how musch you move the clocks.
Most workers are leaving home in dark & getting home in dark during Dec / Jan with the current set up.
Benefits of staying on summer time:
Schoolkids would get more daylight after school hours - you know obesity /not playing outside enough/ sports etc etc.
See the Danish school timetable for a competent grasp of the benefits of after school daylight hours.
The RoSPA stats ( the best we've got) do indicate there will be a net decrease in total deaths injuries etc. As a libertarian type I believe the more unhurt people the better.

If this went ahead then it would not get light until after most people had got to work or school. Remember last winter? Wouldn't that have been fun, trying to make your way to work or to school in the pitch black, never mind the snow & ice. This is a ridiculous idea, I don't know anybody who supports it.

The odd thing to me about this matter is that few people seem to be saying what they personally want. People quote statistics about increases or decreases in deaths and injuries, especially to school children, as though those statistics are the be all and end all.
Important though the possibilities of injuries and deaths is, surely it must be only part of a much bigger equation? What are the economic ramifications? Will the people of Scotland be more prosperous? As 'nessi...' says above, is there an advantage to children to have more light in the early evening?
If the change would be better for Scotland as a whole, is there a case for having shorter school hours in winter and long hours in summer?
The critical thing as I see it is that 'debate' should be open and honest. The last thing one wants is politicians using this to score point off each other.

I will Conan. Thanks.

It's not a case of being against it Nessimmersion, it's a case of what's good for folk here.

I live in the north and with the current set-up schools do have daylight - from 9am until 3.30pm. Why change it?

The RoSPA stats are what I quote and they don't state a net decrease. I'd be interested as to where you saw other stats because the ones I use are from the 1968 experiment which I remember well.

Another good point Observer. Thanks.

Junican, here in the depths of winter we only have around 6+ hours daylight. I prefer them from 8.30am to 3.30pm. Personal choice I suppose. I can remember going to work at 8.30am back in the 1968-71 experiment. As Observer says it was pitch black and horrible driving.

I've come across this website Rosa, I think this guy deserves as wide an audience as possible.

Thanks Conan. I put it on this week's TYP yesterday. ;)

Not ooops. TYP isn't completed and published until Saturday. :)

I'm surprised that those nice snakeoil salesmen who brought us Feed In Tariffs for solar PV and Windmillls haven't suggested an orbiting array of mirrors to give Scotland 12 hours of reflected daylight per day. I'm sure it would only cost £30 per person per year. ;-)

I remember having to wear reflective armbands to walk to infants school in Coventry in the dark and I hated it - dark always feels colder.

Now there's an idea Brian. Get a designer quick!

Now if we could put the clocks back 40 years and remember and avoid all the mistakes - that would be an interesting exercise.

Not a bad idea of Junican - shorter hours in the winter increased in the summer- or a week less of holiday?

There's a simple idea to solve this, ask the people that it will affect.

It seems like more and more, our governments are making issue of piddly things that needn't be altered.

Considering the EU makes all the big decisions for us now, perhaps that's all they have to think about?

Rosie, Solar Mirrors to reflect sunlight onto the earth have been tried although a bit more of the spirit of Robert the Bruce is needed. It's a technology whose time has yet to come: a project for the Scottish space programme which will use the Benbecula missile range.

I doubt if there were many mistakes 40 years ago Crinkly but it just wasn't acceptable to the Scots here in the north. The big problems were people going to work and children going to school in the dark.

Having the light at the 'end' of the day meant little as it's usually too cold and folk just want to get home and inside.

I'm wondering if this is part of an EU directive to get the UK in line with Europe Sue. Haven't had a chance to really look into it.

Brian, that's intriguing. Such technology and science moves on a pace so perhaps it could be further developed nowadays. Costly business I expect though.