It's A New Day 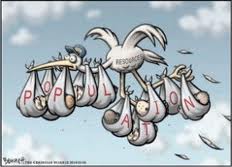 A post by Tedious Trantrums.
It’s a new day… it’s a new scare!
The worlds population passed the 7 billion mark a few days ago apparently. I wonder who was counting? Cue hand wringing from all and sundry. Dizzying figures quoted for much higher population numbers in the years to come. Gloom. Doom. Disaster.
The evidence suggests otherwise. There is a secret antidote. First of all though consider an unusual bit of evidence. The Broons. A large family. Families were much bigger in Scotland not too long ago. Since then the nuclear family of Mum and Dad and 2.4 kids has come and gone and the birth rate in Scotland has been dropping. Yes there are blips but those are primarily due to immigrant births. Our population has been falling but the story is the same as for the birth rate. Immigrants. And there is no problem with that.
The secret antidote to population explosions is prosperity. When people have access to jobs, good food, good health care, pensions, comfort etc. family size drops. People can make choices. They can control their own lives to a degree at least. It’s a no brainer. The Chinese experiment of one child per family has become a serious concern. The social impacts of this policy are just beginning to be felt. In the future there will not be enough younger people working to pay for the pension requirements of previous generations.
Lifting people out of poverty also reduces the use of their children as currency. Larger families are, in part, an attempt by the parents to ensure they have someone to look after them financially and socially when they get old. Prosperity and mobility requires fewer babies.
Of course population explosions have been prophesised many times in the past. A large population cannot be fed as agriculture cannot keep up with food demands never mind get ahead of it. And yet it has. Not only has it kept up it has been phenomenally successful. We have enough food production in the world to feed everyone quite happily. The real question is why we allow people to go to bed hungry when there is no good reason for them to do so. Beyond political shenanigans anyway.
We are secure on our bit of the planet and we will be for a long time to come. Unless of course our politicians make a mess of things by reducing our ability to take our place in the world and be fully able to maintain it against fair odds.
Let’s hope.
Tweet
Posted by subrosa at 09:22

Not sure I can agree with you on this one. It's a fairly logical assumption that infinite population growth cannot be sustained on what is a finite resource - the Earth. Sooner or later a maximum capacity will be reached.

And sure, agricultural technology may have done a reasonable job of keeping up with growth - although that in itself is debateable - but whose to say that that will always be the case? And is just only food production we're talking here? What about energy and fuel, for example? Or environmental degradation?

I agree, however, that increasing quality of life decreases the number of offspring - just look at the differences in population growth between developed and less developed countries.

It simply strikes me as naive to consider that unfettered population growth will never have a negative impact on our planet - if it weren't for those pesky 'political shennigans'...

At 8am you place a single bacteria in a jar. That bacteria duplicates every minute. At one minute to midday the jar is half full.

Question: at what time is the jar full?

Question: Foreseeing the jar is soon to be full, you search around and find three other jars exactly the same as the first. How long before these are filled?

Answer: the first of the three at 1 minute past. The other two by 2 minutes passed.

Perhaps an over simplification as the wastage(death)rate isn't factored in, but it does apply to the sustainability of resources (the containers) and the speed with which they are consumed.