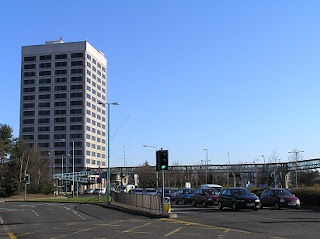 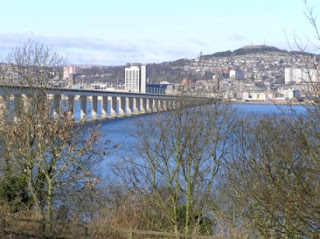 The town planners in Dundee have seldom been the brightest or the best in the last century. They took take pride in demolishing some handsome buildings in order to replace them with a variety of concrete boxes.

The council offices in Dundee used to be housed in the above tower which was named Tayside House. (It's to the centre-left of the lower picture).

When I returned to Dundee in the 80s I was stunned by a skyscraper standing, like a sentry, at the Dundee end of the Tay roadbridge, right in the heart of the city centre which concentrates around the river edge.  A monstrosity is the kindest description I can apply to this elevated concrete block which, thankfully, is no longer.  It was demolished this year much to the relief of Dundonians.

Where have the council offices gone?  They've moved to this new building now named Dundee House: 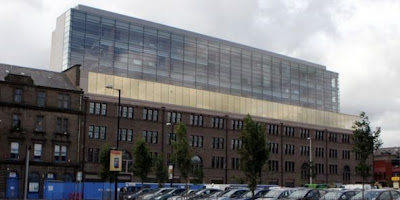 The lower half of the fascia is false and is the restored frontage of an old warehouse and the new glass construction rises at the rear. Although this is described as the 'frontage' there is no public access to the building from it. Not all Dundonians are happy with the structure.

Dundee Civic Trust says 'history has repeated itself with supremely ugly' Dundee House. I have to confess to an interest in the Civic Trust because I used to deal with them in my working life.  They are a voluntary group of highly qualified professionals who are completely dedicated to preserving the city's heritage and encouraging new, well designed developments. 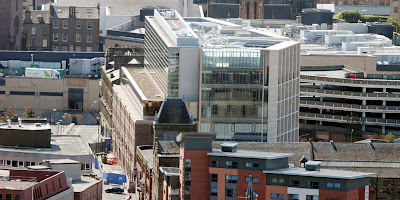 a view from above with the warehouse facia on the left
Their criticism is scathing and rightly so:

''The only conclusion that one can reach is that the building shows a lack of understanding of architectural grammar. And this is not the end of it. When a facade of an existing building is retained, it would be expected that the building behind it would have at least some relation to that facade. Unfortunately, the retention of the warehouse facade with its former multiple access points for lorries does not work at all.


''Given the city council's knowledge of the criticisms which have been made of Tayside House, one would have hoped for so much better from the combined efforts of the council, its planners and the architects.''


Public money built Dundee House yet the town planners ignored the comments of the Civic Trust throughout the protest, just as they did back in the late 70s when they built Tayside House.   The Civic Trust is the people's voice and once again the good burghers of Dundee have ignored it.  Their response is that 'the building has already won a prestigious award for its design and is in the running for more'.

All that seems to matter to council officials is the number of awards they can gather.  If I remember rightly Tayside House, when it was built, also received awards from various agencies.  Mixing the old with the new in this design does not work.  The renovation of the warehouse facia is superb workmanship and the glass building behind similar to many dotted around cities throughout the UK, but the combination in this instance destroys the visual appeal of either building.

Although Dundee's architects and planners think they have a 'successful fusion of old and new', I think in years to come they will be proved wrong. Maybe they should have conferred with Perth's planners concerning the blend of old and new.  Perth renovated a listed building but also included modern architecture. 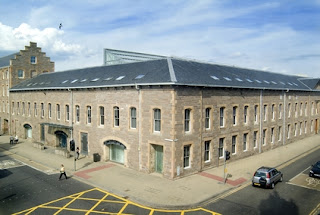 It looks like a big squat alien transformer looming over the old building. And who on earth thought the row of yellow shortcake biscuits decorating the old roof were a good idea?

A super description Woodsy. It's just awful in my opinion and I haven't spoken to a Dundonian who thinks differently. Of course none is an architect or planner.

I disagree. I think the new building is very interesting.

I don't think much of the Perth offices.

Ah well Rab, it's good to know we all have differing tastes. :)

Ness, I doubt if military intelligence would even employ Dundee planners.