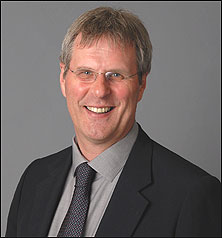 Sir Peter Housden (pictured) began his career as a comprehensive school teacher in Shropshire and worked as an education officer in three county authorities before being appointed Director of Education in Nottinghamshire in 1991.

From Nottingham he moved to London where he rose through the ranks to become Permanent Secretary at the Department for Communities and Local Government.

Why am I telling you about someone you've possibly never heard of? Sir Peter was appointed as Permanent Secretary to the Scottish Government in June 2010 and is being accused of having 'gone native' by Scottish Unionist parties. The Unionists are so incensed by Sir Peter's support of the SNP government that they are lodging complaints with Sir Gus O'Donnell, the Westminster cabinet secretary and the UK's most senior civil servant.

What are Sir Peter's offences? He sends weekly updates to more than 5,000 Scottish government civil servants on the work he is undertaking and personal musings, but some have become concerned that the briefings have 'crossed the line' into politics.  As well as recommending his colleagues see a play that deals with the English army's shaky attempts to impose order in Scotland, in a memo sent just after the SNP's historic win in May, he said:

“And now we go to it.
“This will be a remarkable period in Scotland's history as we embark on a journey toward constitutional reform with the near-term strengthening of the Scotland Bill and a referendum in the second half of the parliament.
“It's remarkable how the terms of this debate have changed irrevocably in just three weeks. Calman and the status quo now seem lost in the mists of time.”
To further inflame the Unionists, Sir John Elvidge, who stood down as Permanent Secretary last year, has written a glowing article in praise of the nationalists, suggesting that he helped Alex Salmond stay in power and contributed to his 'political success'. But there's more.  Sir John had the temerity to mention that 'senior civil servants were "sceptical" about the previous Labour/Libdem administration'.

Also from Sir John's personal musings, we learn that the SNP government allow special advisers to take part in Cabinet discussions on government policy.  What a revelation!  Senior civil servants doing their job and supporting the government of the day.

It is common knowledge in Scotland that the SNP are governing efficiently and effectively and the people will be pleased to note that our elected representatives are making the best possible use of our civil servants' talents.

Somehow I feel Sir Gus will answer the unionists in two words - 'grow up'. It's refreshing to hear the opinions of mandarins who, many would say, run the country. As for Sir Peter's weekly updates - I want one too.

Was he not sent north to Scotland because he presided over the £600m fire service IT disaster and they wanted to 'move him on' ?

"Gone native" says it all about the attitude involved towards Scotland.

The regional fire control centres were supposed to be something for the English regional assemblies to look after, to give them a bit of legitimacy. I was involved with fighting this in the early days.

Recently Prescott was interviewed (I am told) and shrugged off any personal responsibility, more or less with "You can't get the staff nowadays".

The same thing happened in reverse with Sir Muir Russell, the civil servant responsible for the tenfold cost overrun on the Scottish parliament.

He was shipped south to enquire into and exonerate the "scientists" of the Climategate emails at the University of East Anglia.

The country's in the very best of hands!

Instead of requiring a resignation, you can ship 'em off in either direction with glowing testimonials.

Sir Gus who is called GOD because of his initials but I would guess perhaps because of his grasp of his brief as well, has already told the SNP attackers in the persona of Lord Foo Lord Foulles for those not in the know) that civil servants who work for the Scottish government will support what that government does, as it has a mandarte to pursue it's manifesto commitments.

It's just as ad hominem bringing up his past performance in this context as accusing him of going native.

What I would like to know is, if Iain Gray, for t'was he who uttered the phrase, thinks that Alex Salmond is a native, then what exactly is he?

Sorry for the typos.

Should have read Lord Foo (Lord Foulkes for those in the know) & mandate doesn't have an ''r'' in it!

A blog I have just discovered, may be of interest to Scottish patriots:


If Mr McGeddon is correct then we can expect many many more civil servants from London to join us, in particular from the MOD.

Here is what newsnetscotland.com said of the appointment:

Unionist parties complaining about the ‘partiality’ of a Scottish Government civil servant are today facing claims of hypocrisy after it emerged the UK Government has already hired an ex LibDem election candidate to ‘coordinate’ Whitehall civil servants ahead of the independence referendum campaign.

A furious row has broken out after memos sent out by top civil servant Sir Peter Housden suggested that Scotland was now on a journey towards constitutional reform and that the Calman Commission had been rendered redundant by the SNP’s landslide victory in May.

In a memo sent out on May23rd Sir Peter said: “This will be a remarkable period in Scotland's history as we embark on a journey toward constitutional reform with the near-term strengthening of the Scotland Bill and a referendum in the second half of the parliament.

“It's remarkable how the terms of this debate have changed irrevocably in just three weeks. Calman and the status quo now seem lost in the mists of time.”

The senior civil servant also recommended a play called Dusinane to staff as well as an article said to be ‘sympathetic’ to the SNP.

The emergence of the memos has led to the leaders of Scotland’s three main opposition parties writing to the head of the civil service, Sir Gus O’Donnell, complaining of partisan behaviour.

However, Newsnet Scotland can reveal that earlier this month the UK coalition government appointed former Scottish LibDem candidate Christine Jardine to act as a special adviser liaising between No 10 Downing Street and the Scotland Office.

According to media reports Ms Jardine, who is also a former Herald journalist, was hired in order to ensure Whitehall departments were properly focussed on the ‘Scotland situation’ especially with the independence campaign ahead.

Ms Jardine unsuccessfully fought the Inverness and Nairn seat for the Scottish Liberal Democrats at the Scottish Parliament elections in May.

The reports also claimed that Allan Ross, a civil servant, is to manage Scottish matters at an official level within Downing Street.

According to media reports, a senior Whitehall source said the appointments were “confirmation” that the Scotland situation had to be focussed ahead of the referendum campaign.

The role of Whitehall civil servants in relation to Scotland has been questioned before. In February this year a secret document released by Wikileaks revealed that David Middleton, the former director of the Scotland Office, had told US officials that the Scottish public had “little appetite” for a referendum on Scottish independence.

According to the cable Middleton claimed and that the economic crisis meant that “most people in Scotland now find the notion of independence 'dubious'”, 'Independence,' he said, 'is less alive than a year ago.'"

In February 2010, Newsnet Scotland revealed that then Secretary of State for Scotland Jim Murphy appeared to have used his position in order to raise his own profile in Scotland.

A Scottish Office memo at the time said: "The Secretary of State is still working hard to raise and maintain his public profile and has been doing well in the media so far. He continues to look for opportunities to promote his own position and the role of the UK Government in Scotland."

This latest attack on Sir Peter follows a similar attack earlier this month when a House of Commons report singled out the top civil servant for criticism after £468 million was “wasted” in an attempt to centralise fire services in England.

I didn't realise that RM. Mmm, although that doesn't make him quite useless, does it? :)

It does Jeanne. The unionists could learn a little from their description.

Thank you for your comment Edward, Very informative. As my father, himself a high flying civil servant in his day said 'comply or lose out' was the message. I'm so pleased my father never complied and although he spent his few years of retirement on a pension which wasn't enhanced by him 'toeing the line' he was content.

Observer, I'm with you on this one. It's mischief making from the unionists I belief. How else would the civil service work without carrying out the orders of the politicians of the day?

I read about it here SR..

He got knighted for his services and sent north to help us as well.

I doubt if he can do any more damage to the country than the SNP will do with their suicidal windmills and wave machine schemes and attacks on the poor with dearer drinks and smokes.

Thanks KBW, I'll look at your link.

Also thanks for the NNS article. I missed that one.

I have to agree with you about the windmill business RM and the silly target of 100% renewables by 2020.

My take, with apologies for the disorganised information:

(you can link to Elvidge's paper from the Guardian article)

Many thanks for the most useful links Sheila.

Sir John Elvidge, not Elvridge. I should know - I was at college with him way back, when he used to pretend to be a hippy. As did many of my colleagues, who then went on to suck huge salaries out of the public teat.

Jings you're going back a few years. I'm sure you've done just as well though. I won't mention pensions...