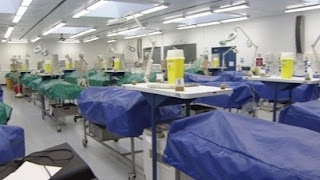 Dundee is home to one of the most renowned forensic scientists in the world, Professor Sue Black.  She is also a willing advisor to Val McDermid, one of Scotland's top crime writers.

Professor Black wants the University of Dundee to build a world leading forensic centre and the University agreed by stumping up £1 million.  However the building will cost £2 million.

The new morgue will allow Professor Black and colleagues in the Centre for Anatomy and Human Identification (CAHID) to adopt the Thiel method of embalming.  This gives surgeons, dentists, students and medical researchers a more realistic method of testing techniques, practicing procedures and developing new equipment and approaches.  The CAHID team have developed groundbreaking techniques in areas such as hand identification, which has directly led to the successful prosecution of a number of paedophiles identified from images of the hands found in obscene photographs and films.

In a creative move Professor Black has organised a £1-a-vote fundraiser in conjunction with some of the world's most famour crime writers.  The new mortuary will be named after the author who receives the most votes. The names of the ten authors involved can be found here where you can also find out more about this 'dead exciting competition' according to the website.

As an avid reader of crime fiction, I'm at a loss choosing a favourite as all have their strengths.  However, in true patriotic style, I have placed my money on Val McDermid and Stuart MacBride. Now I have to discover if I decide to leave my body to medical science and it's accepted, will it find it's way to the new morgue in which I now have a £2 share. Perhaps they'll decline my offer as they possibly have a regular supply of tough old birds.
Tweet
Posted by subrosa at 09:20

The morgue the merrier?

That's better than mine Demetrius. :)

Everyone should donate their cadavers to the political party of their choice.

God knows they have all bled them while we were living.

That's an idea Crinkly then they can sell them to expand their coffers.