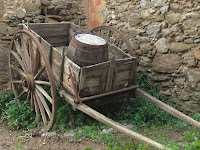 Petem, no decent person can want advantage at the expense of others. Socialism loses the plot when decency and fairness, as ideology, is replaced with chip on the shoulder politics of envy.
As an "Oldrightie" I want to see a socialism based on reality and compassion. I want to see hard work rewarded, slothfulness, ignorance and the trade union mantra of champagne belligerence ridiculed. All walks of life has its decent as well as its grotesque. Human frailty and nastiness is not confined to socio/economic groups. My favourite film is "The Shooting Party" in which my political leanings are well demonstrated by the approaching universality of slaughter approaching without favour.

petem - Thank you for a wonderful post.
How much your background reflects my own. You have brought from the recesses of my mind, fond memories of lively debates round the kitchen table with grandfather, father, a few friends and we kids (yes, we kids were allowed and welcomed to get involved). Mother was always there making sure the conversations never got too heated and supplying endless rounds of tea and sandwiches.

Both my grandfather and father were staunch socialists. Their politics born out of a common life-changing experience – war. Each had gone through hell for king and country, and each had returned home to what they hoped to be a land fit for heroes. That was not to be. All the long years they had been fighting, the rich had got richer and the poor had got poorer. Society had to change.

I know for a fact that father did not vote for ‘new labour’. To him they were but tory wolves in socialist clothing.

Very good. You articulate the reasons why this bleeding heart default middle class liberal voted Labour from his first vote in 1970 until Iraq; at that point I realised to my horror that rather than electing the Labour Party again, in 1997, we had invited a Fifth Column into the country that was antithetical in oh so many ways to what we are and stand for. The socialism of the working man has been replaced by the perverse socialism of the Cultural Marxists. How long we will have to pay the priced for them, I do not know, but - to put it bluntly - I curse them, for all of time.

Then and now. Once Labour represented the labouring classes across the UK. Now it represents London, finance, the media and attached foreign money men. Not the same at all.

What an interesting post. Coming from a family which appears to have been Tory since the days of Good Queen Anne ( mostly tenant farmers, small tradesmen and the like) , I appreciate the weight of tradition which can be a help as moral ballast or become a sheer dead weight,

I am sure that there are many Tories (or small c conservatives) who feel just the same about the Conservative party. The parties have ceased to be real mass movements, grounded in any real constituency of opinion and interest. They have become mere vehicles to get politicians elected - political "brands" in fact with no substance behind the brand image.

I heard one of Labour's bright young men refer to what he called "dog whistle issues" which would always appeal to Labour voters. I thought that showed what he thought of his party's supporters.

The Conservatives do exactly the same. Michael Portillo had an attempt at it as Defence Minister when,effectively, he said "Nobody messes with Britain or I'll set the SAS on them". A disgusting performance which raised a cheer at the time - much as a few appeals to class warfare from John Prescott did more recently with Labour party audiences.

With something over 70% of policy and legislation coming from Brussels, the main parties are like a sort of ghastly, hellish parody of the Holy Trinity - "Three persons of one substance" . All they can say is "We are nicer and we'll do it better than the others". The same goes for all other parties in favour of subjection to the EU. BTW I'm not in any party at the moment.

The political process is rather like a pub with three or more beer pumps but only one barrel in the cellar. The only thing that is different is the presentation and the label on the pump.

Yes, a good post - I especially could not understand the opposition to the Poll Tax; it just seemed so much fairer in principle.

The landscape has changed considerably in Britain - no massive industries anymore, shipbuilding, coal mining, steel - and so the traditional union/Labour base is no longer there.

What we have is a tier of politicians, who have all gone through university, with no visible difference between them - I honestly believe that the party they choose is decided on by the toss of a coin - there really doesn't seem to be any deep political conviction in any of them.

As you say good and bad with all things. We are all products if our experiences which dies shape our views. Compassion, reality and decency. That would do fine Old Roghtie.

Thanks JRB I appreciate your comments. Very similar history and probably familiar to many people around Scotland and the UK as a whole.

Elby, I really like your 'cultural marxist' descriptor. Thanks very much.

Edward. Our political opponents may well have become our allies as we all recognise the need to be free of the EU colleagues and their non-democratic tendency. Who'd have thunk it...

BJ. Yes. I was reading an article just the other day which said politicians tend to a politics and economics degree which provides them with knowledge if neither. Not a great starting point to govern.

A really good post petem130. I come across a number of people who say they have to vote Labour as their Father & Grandfather would turn in their graves if they voted otherwise. My reply fits in with your post, "They are probably turning in their graves anyway as the Labour Party they supported and voted for is nothing like the Nu-labour we have today."
My follow is usually is "At your age why is a long dead parent still deciding what you think? Can't you think for yourself?" As other posters have said to many people do not.
Edward Spalton's comment hit's the nail on the head "The political process is rather like a pub with three or more beer pumps but only one barrel in the cellar. The only thing that is different is the presentation and the label on the pump" That is so true for these EU supporting parties.

Peter Adams,
Thank you for your kind remark. I can give two first class examples of unthinking party loyalty from my own experience.

At the time of the 1975 referendum on what we (and the government) wrongly called "the Common Market", my father said
"I don't like this European business. It doesn't smell right". The he added "But that man Wedgewood Benn's against it, so there must be some good in it".

Then in the mid Nineties, I was canvassing for UKIP in a by-election in Hemsworth in the Yorkshire coalfield.

After some thankless days, I doorstepped an old lady who actually agreed with me. She hadn't received our leaflets but thought just the same.
"May we count on your vote?" I asked.
"No duck, I'm Labour".

When I started to explain that she would be voting for all the things she didn't like about the EU, she just put her hands over her ears!

Peter Adams has introduced the elephant in the room mentioning the EU and I can't help but agree with him.

Petem, until the EU is brought to the top political table, then nothing will change. The Scots seem to have such little interest in it for some reason and I can't understand why - yet.

Looks like the top of the political table just took a huge step forward. Perhaps there will be no EU as such to discuss? Timely comment Subrosa.