Who Cares? We Don't 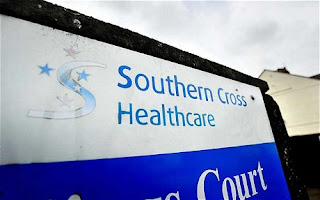 Southern Cross, the provider of home care for our elderly, has announced it is to shut down.  Its shares were suspended at 6.25p by the FSA - not the most diligent of government departments.

The company owns around 750 homes in the UK and will hand over control to landlords after it became unable to pay its rents.  It started a four month 'financial restructuring' in March yet it has been quite obvious for some time that this company was unable to provide an acceptable standard of care for our elderly. Nobody with the power to investigate did anything about it because they relied upon the Care Commission's reports.

What happens now?  The majority of their landlords are overseas investors.  Their prime interested is making money, not caring about those folks who have given much of their lives to ensure that future generations can enjoy something better.

Although I understand the frustrations of a this blogger, I do wonder where we go from here in the care of those who are unable for care for themselves.

One person interviewed earlier on this evening's STV news (no video yet available) suggested that the care of the elderly should be dispersed into smaller businesses.  He was so right.

It has been so easy for politicians to ignore the complaints of care home residents /friends because most, in the past, died within a year or two of being admitted to a 'home'.

Is it acceptable that we profit from the care of the older generation's physical and physical problems, which I can truthfully say can be an affront to a person's dignity ?

Since the health and well-being of those most vulnerable in our society was handed over to private enterprise on a plate, without protest, that's why we are in the situation we are now.  With thousands of vulnerable older folk at the behest of those who think care is a big profit business and government support that ethos, then there's no hope for them.

I've no wish to be in a care home.  I've made so many arrangements in the hope that the situation not to occur, but we never know what hand will be dealt us. Many have to rely on families who live hundreds of miles away and the accounts NHS and social services give them - regardless how unfounded it is.

Aa for those who are resident in homes owned by Southern Cross Healthcare I have nothing but sympathy.  That's not enough when the UJ and Scottish government have ignored the early warnings signals for so long.

Labels: care of the elderly, healthcare

Sadly the older generation, when they have to resort to residential homes, are used as cash-cows and vehicles for profit. They are not seen as people, but business assets.

I know of homes being run much like prisons, with little freedom or choice for residents.

So much for legislation such as DoLS and POVe and the toothless, ineffective and incompetent CQC.

The provision of care for those that require it needs to be hugely reformed, but unfortunately there is no voice for them as they are in a minority.

The bald fact is if they had the capacity to vote, someone in Parliament might be minded to leverage that support and become a champion for care. As it is, they don't, so they are a very low priority for government, until the next crisis, media storm and associated governmental kneejerk reaction.

A classic illustration of the low priority assigned to care is the quality of senior management at the Care Quality Comission, startin g with the chief executive. http://www.thesun.co.uk/sol/homepage/news/article2327967.ece

Its readily apparent that the CQC mission is not to promote or even improve the quality of care, but appear to care at the lowest cost.

Within 24hours of David Cameron announcing the government’s latest episode in its Big Society fiasco, which has been given the grand title of The Public Service Plan which puts the emphasis on companies running social and health services, we see the unacceptable face of such conservative policy when things go wrong.

That the situation has been allowed to come to this is a national disgrace.

JRB: Couldn't agree more. Shortly England will have most of its social services run by private companies. It seems that Cameron is oblivious to, or unconcerned by, the news today that Southern Cross is bust.

He wants to repeat this folly across a wide range of public services.

Southern Cross made lots of money for its shareholders by selling all its properties. At that point it was doing what private companies do. Making money.

Due to bad planning and poor management it has failed, and what is left of its shareholders have been left with pretty much nothing. But the clever ones baled ages ago, just after the killing on property.

Del, I missed that about your CQC - why I don't know because that really is appalling.

Yes they're cash cows and nothing else. Didn't Cameron appoint Joan whatshername to speak for the elderly? She's very quiet.

You're right John, nobody knows what will happen now. Will these overseas landlords buy at a rock bottom price? The whole situation is a shocking reflection on politicians.

It seems Cameron is as competent in PR as he is as PM.

There's an interesting article in the Herald today with some words from a care home owner.

SR, you mean Joan Bakewell? She was appointed during the Labour years. As to whether she still fills the role or its someone else or even if the role still exists, I don't know. Google is no help, so the assumption is there's no-one filling the role currently.

No surprise, given a government that is forcing the mentally disabled out of the ESA system into jobseekers even when they're clearly not able to work, systematically reviewing every disabled person's funding and attempting to cut it where possible.

Ah, so she's no longer in post. Then that's why she's slipped off the radar.

Yes, I'm keeping an eye on the way in which many are being dealt a rotten hand.