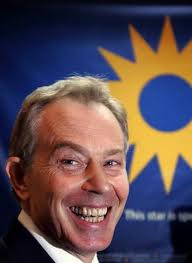 There was quite a furore around his book signing appointments when two were cancelled because Mr Blair was feart of anti-war protestors.  We, as taxpayers, also paid for his police protection when he did attend signings and we still pay for his protection when he's in the UK - another misuse of taxpayers' money when it could be spent on those who are far more deserving and have brought pleasure to thousands for many years.

It was reported that the former Prime Minister received an advance of £4.6m for A Journey and said he would hand over all the money he makes - including the advance - to the Royal British Legion: "as a way of marking the enormous sacrifice [the armed forces] make for the security of our people and the world."

Mr Blair's statement was made in August last year. The RBL were criticised for accepting such a gift but said it would help it hit its £12m fundraising target.

However RBL accountants can find no mention of the charity having received any monies from Mr Blair, although the latest accounts only cover the 12 months to the end of September last year.  Time enough for Mr Blair to have contributed his advance I'd have thought.

The RBL are saying next to nothing and the same tactic is being used by Tony Blair's office.

I never liked Blair.  He is of the same Chief Salesman pie mould as our current PM; all pastry and no filling. At the time his 'largesse' didn't surprise me because he abused our armed forces during his terms of office by sending them to wars for his own political ends.  He hasn't changed.
Tweet
Posted by subrosa at 09:15

One reason that Tony Blair got away with things for so long was (I think) that he always believed what he was saying at the time he said it - and that showed. I was surprised that the electorate was so taken in as to re-elect him - but I suppose the opposition was lacklustre.

Incidentally, there is a clique high in the Conservative party(we are told) which really admires Blair - hence Cameron's ambition to be "the heir to Blair".

The more he talked of his honour, the faster we counted the spoons.

One of my father's pieces of advice was
"If a man tells you he has very high principles, you can be sure he has very low morals"

I have frequently found it to be true. Thanks, Dad.

I venture to suggest that Bliar represents exactly the people we ALLOW to run our lives.

He came over as a slick salesman to me Richard. So does Cameron.

We do Oldrightie, but we don't get choice unless with the few independents. All selected party politicians are there for their loyalty to that specific party. Nothing to do with their skills.

their is nothing about this man that you can admire or respect the only thing worse than him is what followed him.

Well said Jacobite. Unfortunately he still makes millions because many as yet haven't seen through him.

What I wonder, do Rupert and Rebekah know about the complexities of the Blair finances? He has been very very quiet lately. Can this be out of modesty alone? And ta for the link.

I think you know the answer to your own question Demetrius. :)

It's always a pleasure to highlight one of your posts - and to read your blog.