This Could Solve Edinburgh's Problem

Shock. Horror. The Scots don't seem to have taken the idea of electric cars to their hearts.

In the first six months of operation fewer than 700 people have taken advantage of a 'generous' government grant to encourage us to buy one even although a company, specialising in electric vehicle infrastructure, said it would provide 4000 charing points across the UK by the end of 2012. This follows a decision by the Westminster government earlier this month to abandon plans to install 9000 points by 2013.  The excuse given by the government for this decision was 'the infrastructure would be expensive and potentially under-utilised as most motorists would charge their vehicles at home or at work.'

Unbelievably, Transport Scotland is working on plans to install 375 public charging points across central Scotland to target commuter journeys between Glasgow and Edinburgh.

It is unbelievable - when the UK government make the excuse building the infrastructure is too expensive, yet another branch of government ignores it.  These wee cars may be exceptional on fuel but their purchase cost is prohibitive, charging costs aren't yet known and no one as yet has proved their stability in Scotland's winter weather.

My apologies for once again writing about electric cars when the title of this post is about Edinburgh's problem - which is trams.  I wonder if this is the solution and Edinburgh council ought to be arranging immediate talks with South Korea. 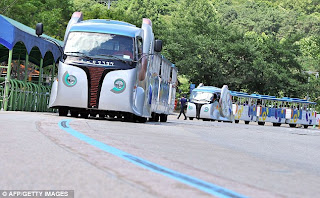 These could have saved a city having its roads dug up for years.
Tweet
Posted by subrosa at 19:29

If they covered the boot + roof + bonnet of the 'Leccy-Cars with the durable (we know they're durable 'cos the manufacturer told us they were) solar cells used on the Big Belly Compacting Litter Bins, then maybe those expensive 375 charging points would be unnecessary?

Being honest I'd not be averse to using an electric car in Edinburgh if the per mile price was right and there were no parking charges on top of that. Like the City Car scheme mixed with the way that Boris's bikes work in London.

Alternatively I could go by bus, taxi or car. It's roughly, for two people, £5.20 for bus fares, £14.00 for a taxi or £5.00 per half day parking. No idea of the pricing for the trams but since they don't go anywhere near I'd be interested apart from the airport there's not much point even if they do make a much later appearance than anticipated.

Electric cars just don't work at the moment and since there's no global warming, no greenhouse effect to affect anyway and the electricity produces CO2 no matter how you do it... well it's a kind of mute point.

A solution for a non problem.

They could almost have provided them free for the cost of the tram system!

And BTW SR I think you mean charging points rather than charing points (which is maybe where the home helps and office cleaners can be borrowed?). I point this out not to establish superiority but only because I believe it is the first time I have ever noticed a typo in your posts (except the capchas which are often grossly mis-spelt)

Rosie's only typo was omitting the second 'r'.

Public Charring Points as in when the Voltage Regulator packs up.

All battery driven cars do is to move the point at which pollution occurs from the streets to the power stations (unless they are charged using windmills or nuclear generation). Or do they have a winding handle like my torch!
And no one has answered the real questions about the life of the batteries or the cost of replacement (new batteries and disposal of the old).
The Scots aren't daft when it comes to spending their own money!

I guess you are correct there JP. Or maybe when the local wildlife/cyclists/mobility scooters/ old people chew/cut/trip or otherwise damage the cables trailed over the pavement.
It amuses me to consider how these town dwellers, many of whom have no off road parking, will charge their cars at home. Loads of fun for the local yoof with live cables at hand!

Now that's an idea Joe. I had a wee hurl in one of these cars the other week and felt very vulnerable on the open road. I like a little space around me and there was none.

A solution for a non-problem right enough petem. But the tram one is a good idea, a little too late of course.

I did mean charging and many thanks for pointing that out Woodsy. The proof reader missed it so she's sacked. :)

He he Joe. I can just imagine all the cables littering pavements from those who live in tenements.

You're right EP, I don't see the benefit of these cars because I doubt if you would get your investment returned and the cost of batteries could turn out to be prohibitive.

I love my wind-up torch. I've three. Two in the house and one in the car. One of my much better investments.

Ah Woodsy, we have the same vision of pavements covered in cables. Of course elf and safety will ban them so what happens then.

@ EP isn't a vehicle with a winding handle to generate power a bicycle? Rats, Sir Walter Raleigh has already invented that :)