Labour Attempts to Plug Into the Future 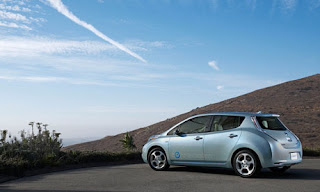 I trust you've remembered the Westminster government's New Year present to us all - a £5,000 electric car grant - all part of the process of meeting carbon targets.  Surely you haven't forgotten such benevolence from the Coalition.

Motorists will have a choice of just one subsidised car to buy outright this year - the Mitsubishi e-MiEV - but should have a choice of nine or ten fully electric and plug-in hybrids by 2010.  The AA's president said a car such as the Leaf (pictured) would cost 3p per mile to charge and run, compared to around 14p per mile for a similiar-sized petrol or diesel vehicle.  They also pay no road tax, have cheaper insurance premiums, are exempt from London's Congestion Charge and can be charged for free at some public car parks.

Some Scottish councils have purchased electric cars for their staff by way of a £105,000 low carbon vehicle support grant from the Scottish government.

These cars currently cost over £30,000 - minus the £5000 grant - and only the reasonably wealthy would be in a position to give them consideration. Even the best reviews emphasise they are only for city driving as they require frequent recharging.  The Institute of Engineering and Technology magazine claims it could take a day to recharge with a domestic electric socket and they could be restricted to less than 100 miles while batteries would only last two years.

But, if you do fancy one of these new-fangled modes of transport, although you're worried about recharging facilities, all in not lost.  Chugging into the picture is Labour's Iain Gray with a manifesto pledge of 10,000 new charging points for your new toy.  Who could ask for more?  Possibly the current owners of the few cars on Scottish roads because there are just 10 sites with public charging points for electric vehicles in Scotland.

Friends of the Earth are over the moon at Mr Gray's policy.  Says Beth Stratford:

“A less obvious benefit is that electric vehicles can help smooth out the peaks and troughs in demand for electricity.
“If demand is high then the charging process could be deferred for several hours, and with expected improvements in battery technology, it will be possible for energy to be drawn from the batteries to help cope with temporary shortages of generation.”

Ah, I see the purpose of these cars now.  Their use will be controlled by power suppliers. Why didn't I see that coming?

Mr Gray's policy will be seen by most as supporting electricity suppliers rather than making life easier for the general public.  If the best Labour can do is copy SNP policy and build power points for cars, which will only be owned by the better off, they won't win support from floating voters.

Between the despicable manipulations of Eric Joyce and Iain Gray's latest major Labour policy I've no idea why anyone with an iota of sense votes for them.
Tweet
Posted by subrosa at 20:16

"I've no idea why anyone with an iota of sense votes for them."

I think you just answered your own question...

Global warming won't even save them in Scotland.

You have damn cold weather up there; and, it's prolonged.

It might be worth asking the manufacture their range when their electric heater is on.

Stop the world! I want to get off.

Deferring your charging if there is excess demand? Taking your electricity if the 'community' needs it? The totalitarian aims of the left were never so clearly visible.

Yes, I possibly did rightwinggit. Ironic.

At least we wouldn't have to wait for suppliers to decide when we'll receive a charge SH!

I've heard, aside from the use of battery juice, the heater is quite hopeless Joe.

Take me with you Crinkly - please.

Thank you Richard. That's the first time I've heard that the intention was to have rationing, although it has been rumoured.

it will be possible for energy to be drawn from the batteries to help cope with temporary shortages of generation.”

So they will only work when the wind is blowing?

You're too witty for this time of night Woodsy. :)

Batteries are the weakness of these plans and it's not going to be a quick fix since we've been working on this for years. Certainly things have improved but not by anything like we need.

If electricity is going to be rationed then it's going to affect electric car use or non-use. That's obvious.

Hybrids are a step forward.

Saving energy is a good idea mainly because it saves us all money. The argument that reducing your energy bills saves you money however, is only a short term gain. The total price of energy for a year will become the same as it was before although we will use less. This has already been seen in the US when people reduced their water use, the savings were only short-term.

No one has an answer to this as yet.

How are Wee Eck and Deputy Nippy going to get around the absolute unavoidable need to increase nuclear? Even George Monbiot has jumped on that bandwagon which is progress, maybe. Where does that leave our esteemed Leader.

Don't get me wrong I like and support bith Wee Eck and Deputy Nippy. I'd even go as far to say that they have character and a sense of humour etc.!!!!!

Not only the batteries but the lithium contained therein petern. The greenies won't even remark on that.

Of course we associate reducing use of something with saving money but that's not the way it works. Year on year prices increase by around 9-15%, thus any savings you thought you'd make are evaporated.

Now that's a difficult one for the SNP. They've stuck so hard to selling renewables and I doubt if they'll change until the whole country is full of wind power and solar panels. They're the only ones who want the massive farm on the Griffin for example. I'm told even the local greenies weren't in favour of it because of the destruction to the area.

I've posted some more info in the comments at Richards linked post. The 2 PDF's are truly worrying, if you've got the stomach to read through them.

IIRC correctly Bolivia is the source of large amounts of Lithium, and is already threatened with ecological catastrophe due to the toxic by-products of the mining & purifying process.

Thanks Dave. I agree the lithium batteries are a serious problem yet the big car manufacturers are producing vehicles with them.

Hi SR,has anyone done the maths on the power required to recharge a street full of these things? Can the national grid handle the draw down of a couple of million cars all charging at night,over and above the normal peak when umpteen million kettles are suddenly being boiled after east enders ?
I suspect the lights will be going out.
Sad fact is the system capacity is unlikely to be big enough to ever stand the load,has any one ever worked out the electrical power required to power all the cars on the road? Its bigger than you think!

Apogee, if you go to Richard's blog and read microdave's link you may find a bit of the answer.

I had a dream the other night. I couldn't walk on the pavements in Dundee because of the amount of cables from cars into tenement windows.