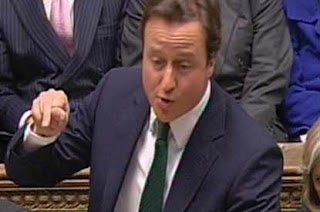 John Souter's account of David Cameron during the News International debate:
On Wednesday, in the bowels of our sovereign and honourable parliament Mr Cameron - who is a Rt Hon and therefore a gentleman - was asked nine times "whether in the course of the twenty six meetings he had with Murdoch or his executives if the BSkyB deal was ever discussed?"
His answer was "that nothing inappropriate had been said."
There is, it seems, a mystical rule in Westminster that a lie cannot be uttered in response to a question of fact but ,it seems perfectly acceptable for a lie to be used to persuade the fact isn't in fact a fact but an assumption. In fact he used the testimony of somebody called Rebekah to a parliamentary committee that in the course of twenty six meetings - during which time a Minister originally in charge of the deal was sacked from his involvement and replaced by a more malleable colleague - a £12 billion deal that would have increased a media moguls influence on both governors and governed and it wasn't top of their agenda is, irrespective of the way you construct a 'fact', totally unbelievable.
You are a liar Mr Cameron.
Next to Murdoch and as the PM you are a prime mover and as such up to your neck in this deal akin to a pimp running a stable of prostitutes.
Time for you and your prossies to move out Mr Cameron and take your austerity scam progroms with you. Use a private removal firm and meet the costs yourself, it'll give your Privatisationed Big Society plans a boost.

I would definitely not insult your intelligence SR - but I am surprised at your belief that Cameron would not lie.

I'm afraid it's a matter of "when they open their mouths" to my way of thinking.

BJ, this is a post from John Souter. I have different views. :)

Mr Souter, whilst I find much of your comments to be a little acerbic, there is an element of accuracy in some of what you write.

Who can ‘we the people’ now believe and trust - the media; the police; the politicians?
Each of them has given us their own unique representation and interpretation of recent events.
Their words couched in such a manner so as to purely protect their own posteriors.

‘We the people’ have been promised yet more enquiries, which will no doubt sit in the fullness of time, but time dulls the memories, which in consequence only makes a casualty of the truth.

Oh what a tangled web they weave,
When first they practise to deceive!
… with apologies to Sir Walter Scott

I expect politicians to lie.

What I find extremely disturbing is Mr Cameron's employment of Andy Coulson despite the well recorded & evidenced warnings against it.

I also find it exceptionally suspicious that Mr Coulson was not subject to developed vetting as I would expect anyone in his key position to be.

This does give weight to the (otherwise perhaps paranoid) belief that News International placed a man at the heart of the British government.

Many posters on other forums are using whataboutery by pointing the finger at the Labour Party. Well, so what, they are not in government & Cameron is.

I have a feeling this one will run & run & that the cover up may prove more damaging to Cammers than the original offence.

"What I find extremely disturbing is Mr Cameron's employment of Andy Coulson despite the well recorded & evidenced warnings against it.

I also find it exceptionally suspicious that Mr Coulson was not subject to developed vetting as I would expect anyone in his key position to be."

I agree with both of those points.

Cameron was well warned but to be honest I think anyone with an ounce of common sense felt shock when Coulson's appointment was announced. I know I did. I couldn't believe Cameron would take Coulson on.

The other thing is that Coulson was going to work with Cameron, the Prime Minister. Why was anything less than a full vetting process thought to be appropriate.

I'm remembering too on the day of the debate and then the vote on the BSkyB bid listening to Cameron's statement and it seemed to me he was pleading with Murdoch to withdraw the bid voluntarily. (I think I posted this on an earlier debate here on the subject.) And of course, Murdoch did that didn't he?

It always amuses me when people rightly point out that people, and especially PMs aren't meant to lie in the House. It is the precise reason why Labour should have dumped Blair as soon as he was found out, along with Campbell, "sexing up" intelligence reports about Iraq's WsMD. And now Cameron is at it too.

Really its time they dropped the title "Honourable" in the house altogether to describe our politicians. It simply doesn't belong.

Jo, I've lost the link, but the other day I read that the vetting is undertaken while the person is in post as it's a long procedure. Andy Coulson had passed the SC level and was undergoing the top level of DV when he resigned.

Quite odd isn't it when not even grandparents can have anything to do with children - in a voluntary way - without requiring vetting beforehand.

Hi folks - sorry for the lack of response, but a one day family trip turned into two.

Yes of course they lie with every nuance they spin. It's part and parcel of their trade and the benchmark that warrants the utter contempt we award then in their ratings and rantings.

But it's the growth in their arrogance with which they ignore our contempt allied to the growing abstinence of their political opponents to truly hold them to account -probably because they're all tarred in the same barrel - that gets me.

As Edward Spalton in one of his recent posts points out. When Heath pulled the wool over our eyes when he pushed to get the UK into the EU, he (Heath) at least had the integrity, or the luck, not to rub our noses in the deceit until some time after the dead was done.

Since then, throughout the regimes of Thatcher. Blair, Brown and Cameron they lie with conviction while the object of their lies are falling to dust around them.

This is not the way for a democratic parliament to act, nor is it an acceptable way to govern a country. This is Del Boy morality of don't rock the boat, it'll be our turn next and we wont want the lash whispering on our back.

It is executive politics where the deal done legitimises the method and to hell with the brakes and balances of the democratic process.

Since the exposures of Murdochgate is it conceivable not to believe Del Boy Cameron and his executives are not in the pimp business, and they're intent on getting the maximum return from their stable - US - the people they supposedly serve?