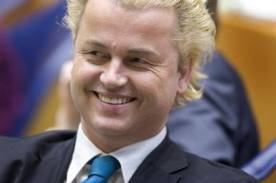 Yesterday, Geert Wilders, the charismatic Dutch politician, was found not guilty of all charges of incitement to hatred, discrimination and group insult.  Acquitting Mr Wilders Judge Marcel van Oosten said: "The bench finds that your statements are acceptable within the context of public debate."

Cranmer states: '(He) has fought to defend the liberties of us all,and he won.' (Interesting comments on the post).

Today, at FMQs, Alex Salmond announced his intention to delay the controversial anti-sectarianism Bill which he was rushing through the parliamentary process. A wise decision which will ensure all interested parties have time to confer and debate, hopefully concluding in the Bill being carried unanimously when the final vote is taken at the end of the year.

Will the Geert Wilders verdict have any influence on the Bill?  Who knows although I suspect many in the Scottish legal system will be scrutinising the Dutch court's judgement with a fine-toothed comb.

Put it this way, if he had said the same things about Jews and their faith all hell would have let loose. But his target was Islam and Muslims so it was ok.

Another example here which Kenneth Roy draws attention to in this week's Scottish Review is the Mail's treatment of Roseanna Cunningham. I can understand there are aspects of this new sectarianism legislation that are baffling but how on earth can a national newspaper get away with pointing out that the Deputy Justice Minister herself is a "devout catholic". What is it to do with anything? And again if they had singled out her Jewishness would they have got away with it? No chance.

Jp, my grandmother used to say religion has caused more wars than money. She could well be right.

This isn't about religion tho Subrosa.

I think the guy was inciting hate but that's just my opinion. The Jews have something called "anti-Semitism" which means everyone must mind their Ps and Qs even when rightly pointing to the terrorist behaviour of the state of Israel. But this guy has insulted every muslim alive yet its ok. I don't get that.

As for the Mail's highlighting Roseanna's own religion how can that be acceptable?

He's been cleared by his own country's justice system of 'inciting hate' Jo. His comments were directed at Islam, a religion.

That's not acceptable and as Kenneth Roy said it's totally irrelevant.

I somehow think Roseanna was snubbed by Alex Salmond's sudden change of heart today. She was the only one who didn't applaud his statement.

As for the obnoxious piece of low-life that is Geert Wilders, I can only, but with some reticence in this instance, paraphrase the words of Voltaire…
“I may disagree with what you say, but I defend your right to say it.”

There would be a greater degree of truth in his remarks of he were to state that the extremes and what is worst in ALL religions “incite violence and propagate hatred”, not just within the Muslim faith.

As for Mr Salmond, he has done the right thing. His bill was a rushed, ill thought out knee-jerk reaction. The proposed bill would have made it an offence to - "incite religious, racial or other forms of hatred" – but - only in and around football grounds and on the internet.

Surely it should simply be an offence to - "incite religious, racial or other forms of hatred" – anywhere and at anytime.

I too agree with Voltaire John and also your reasoned remark that all religions should be covered.

Regarding your last paragraph I thought we already had legislation to cover that but it appears not. The 'breach of the peace' laws are said to be woolly. Why don't they update them then instead of introducing another piece of law?

Whatever the views are about Wilders, this judgement is a rare piece of common sense. I suggest he is a modern day Enoch. he, too, was right.

My working life is spent in a west of Scotland toon with a Masonic Lodge at one end of the High St and a Celtic Supporters Club at the the other.

The town has many problems. Poverty, drugs,alcoholism, anti social behaviour, shoplifting and the like. I encounter all of these on a daily basis.

Here's a strange thing however. Rarely if ever is sectarianism an apparent problem. I just don't witness it at all.

Quite how sectarianism wheedled its way to the to of the government's agenda I don't know.

However if they insist on legislating on it then I'm pleased they've at least taken time to reflect on it.

"You've never seen vocal chords in such a state after his aggressive singing. Poor soul's in the jile"

At least freedom of speech is protected OR. At least in Holland.

In all my years living in the east I've never witnessed any problems either bigrab. This came about because a football manager, an MSP and someone else were threatened.

Personally, I didn't think the wearing of a football shirt to Parliament was appropriate behaviour from any MSP but of course she didn't deserve being attacked in the manner she was.

I'll never figure that out.

I must admit I don't believe in any sky pixie madness but given the choice I'd feel safer living next to jewish sky pixie believing country rather than a muslim sky pixie believing country. At least Israel allows other faiths to become MPs and to worship their sky pixie in peace.
Every muslim country that I've visited has tried to stop me from drinking or speaking freely or going about my business without constant oppression.
So the jews win in my book.

When her religion causes her to discriminate against others - gay people, the Orange Order, for example - then I'd say it's very relevant especially if she's proposing to jail people for 5 years for, er, discriminating against others.

SR, the Bill should be thrown out. There is simply no place for it. Sending letter bombs, death threats, etc. is already a criminal offence so this Bill is unnecessary. Postponing the Bill is only the first step - it needs to be kicked out completely. The fight continues.

I've never visited either a Jewish or Muslim country so couldn't say RM, but I've heard friends say exactly what you do.

William, why single out gays in a discussion about sectarianism? It's nonsense.

But I agree this Bill isn't needed and the laws we already have could quite possibly be updated.

Hi SR. Every person in this country has been threatened with death for being "Kuffar" , non Muslim .And yes, I do consider this a definite threat to me and mine, personally,and to you who are Kuffar, and yet nothing seems to have been done to correct the situation, so these thugs responsible for these threats, think they are fireproof.
As our PM has just said we can protect ourselves in our own homes, is not the land and country we live in "our home " also? As the leader in the UK family,does not the UK government have a responsibility to stop these threats, and throw those responsible out the door.
RM has a valid point in the way Muslims behave in their own countries,have seen some of it, the thought occurs to me that the rulers of these countries know their people and attitudes far,far better than we do.And how to control them. To many of them, there is one king and the rest are slaves. And they all want to be king! Democracy is alien in that environment.We should listen to what they say, one day if the chance comes they will do it, as they do in their own countries now.

Never has the saying "Sometimes, the truth hurts", been more-true.

Our government doesn't want to deal with this Apogee. 'We're a tolerant people' we're told. It's a shame really because it's the elephant in the room and could be resolved by being fair to all.

This is scary stuff. Really.

Subrosa, in light of this thread, that is a joke. We are anything but tolerant.

William, well yes, from your many posts we KNOW that "her religion" is a problem for you before she even opens her mouth. Do you know why that is? Its because YOU are the bigot. : )

Apogee, if Muslims hate us they have good reason. Read up! WE started the war on them. If they fight back I for one don't blame them. I for one also don't go with the "West is best" "White is right" rubbish that people like you seem to believe. I am for freedom for all peoples regardless of creed or colour. I'm a democrat, a real democrat. I loathe the double standards of the west where we go wherever we like, invade at will, illegally, start other small wars, like in Libya right now, and present ourselves as the good guys. Anyone who knows even a slight amount of history knows we were never the good guys. I'm happy to go with the truth. You go with your fairy tales. If the world is now a mess WE created the mess.

Oh and Apogee, that sentence of yours, "Every person in this country is threatened." Who brought that threat eh? It was Blair who brought it when he illegally invaded Iraq and joined the power-mad control-freak Bush in demonising ALL Muslims. They had NO right to do that. Blame them, don't blame all Muslims.