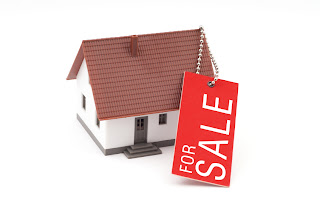 At this time of year there's usually a drop in the house sales market because people are more interested in their annual holiday than thinking of moving house.  However, I've noticed quite a few homes have appeared on the market in the last couple of months.

During a conversation with my friendly solicitor - who doubles as an estate agent - I mentioned the surprising number of larger homes which have suddenly appeared and was told the majority were people wishing to 'downsize' because maintaining the family home with just one or two occupants was no longer financially viable.  The ever increasing utility costs also played a major role in the decision.

Selling a much loved home isn't an easy decision and emotions can run high.

In Scotland a seller has to provide a Home Report which involves a single survey of the property, an energy report and a property questionnaire.  The report costs between £500 and £700 depending on the size of the property and the documents in the report must be no more than 12 weeks old when the property is put on the market.

Last year a neighbour decided to sell her property and move to a flat.  She organised the Home Report, but unfortunately fell an broke her hip a week before she intended to market her house.  Because her recovery was slow it was nearly six months before she felt fit enough to handle selling and looking around for another flat (the one she originally intended to buy had been sold as the vendor wasn't prepared to wait).

So she instructed her solicitor to begin the marketing process, only to be told she would require a new Home Report as the 'old' one was out of date.  This cost her a further £300 and she insists it was an exact copy of the old one with only the dates changed. No surveyor revisited the property to do a reassessment thereby verifying it was purely a paper exercise.  Her Home Reports cost nearly £1,000 - money which can't be reclaimed directly.

Many older people are 'asset rich' and finding a four-figure sum which has to be paid upfront is not always easy.

While the idea of a Home Report seems reasonable - although it's recommended buyers have their own survey undertaken - the 12 week limit is too restricting. If you decide to take your property temporarily off the market, the maximum time allowed is 4 weeks. If it's longer then a new report is required.

Wouldn't a 26 week limit be more reasonable or are the Scottish government happy for estate agents to be making extortionate sums for photocopying original documents?  I suggest the government should put a fixed fee of say £50 on duplicate reports and stop this rip-off, because that's what it is.

Last year the Westminster coalition scrapped home information packs in England and Wales.  The Tory MSP David McLetchie said it was time for the Scottish government to do so too.  Considering these reports are not accepted some lenders and also buyers are advised to have their own survey done, the only beneficiaries are the producers.
Tweet
Posted by subrosa at 09:12

I've not heard anyone in England mourn home information packs (apart from the people who'd been providing them).

They were a worthless expense and we don't miss them at all. Introducing HIPs was one of the few 'achievements' of Yvette Cooper, but don't get me started ....

They are worthless right enough John. But they make easy money for the 'professionals' so government won't do away with them.

It took an ambitious rising T*ry to whack that change through down here, immediately they took office.

Just had one done on a house in France - they are of course an EU imposed nonsense and the energy bit (which is still required in England despite HIPs being nominally abolished) is pan-European in design.
One difference however - the french report cost around 300 euros.

Rosa... I see you have the same SPAM comment about the virtues of American women .. thankfully I moderate mine..

However to get back on subject - I recently sold my home and was asked to provide a second home report after I found a buyer for my house.

The house was on the market for over 6 months- luckily the buyer of my house did so in a cash sale and as such negated the need for a second home report.

I was told the need for a home report was related to the need for the buyer to secure a mortgage - I guess I was somewhat lucky in that respect.

Personally, if I wanted an opinion I would prefer to employ my own surveyor and instruct them to look at the things that mattered to me. These may not be the same as those where the report is done for the seller.

That was one of the many objections in England. Nobody read them.

Pan-European, Pan-European lawyers too Woodsy. :) What good is it if it's classed as out of date in 12 weeks?

Hi BD, he's away into the ether with his strange rant. :)

Not all mortgage lenders accept them BD and they insist on having their own surveyors assess the property.

Aye you were lucky.

Me too Demetrius. I haven't yet seen one of these reports so must make an effort to do so. They must be some tome to be worth around £500.

Nobody seems to object up here John. They seem happy to pay up.

So here the buyer has to cough up and then also the seller for their own survey if they're sensible. Nice wee racket.

The new Home Report system provides more information than the basic survey will. It is more detailed. It was also meant to address the real racket going on whereby every prospective buyer viewing a house had a separate survey done. With the Home Report the seller provides the survey but whoever buys the house pays for it so the outlay is refunded.

The old way meant surveyors costing a report based on the value of a propery, can you believe that? So the more expensive the house the more they charged you for a basic survey.

When I was working in the Mortgage Industry it wasn't unusual for 15 -20 people to be after the same property. A survey from every one of those people who wanted to take their interest to the next stage meant there were small fortunes to be made for surveyors.

The Home Report brought that to an end but it also provides more information including an energy score for the property which gives all interested parties an idea of potential heating costs.

John, as far as I'm aware there is othing to stop a prospective buyer from commissioning their own report.

That's not how it was explained to me Jo. The seller pays for it and can, if they wish, charge a small fee to have it copied to an interested party - but certainly not the whole cost of it by any means.

That too still continues. The bigger the property the more expensive the Home Report. All surveying sites say that.

A survey is only as good as the surveyor involved. I can understand why some lenders do their own.

All in all, the only benefit I see is the energy survey.

Well that's the other thing that's changed Subrosa. Lenders once always did their own surveys. I don't know why they ever moved away from that because it reached a point where surveyors were acting for a potential buyer and looking to value under an asking price.

I haven't had time to google how many lenders still insist upon doing their own lending surveys Jo, but I read somewhere it was about 50%.

Hi SR. Just talking to a neighbour yesterday, he was having to get an old house surveyed for sale, after he received the report and paid the £500
he was made aware that due to our old friend ,Health and Safety, the surveyor could not go higher than 3 meter's 10 feet in old money, so the loft was not surveyed. As it happened, he looked himself and found asbestos lagging on tank and pipes,which had to be removed and then the survey redone at a total cost of around £1000.What use was the original report and what was his legal position if he sold the house under the old report?

A great example and a needless waste of money Apogee.