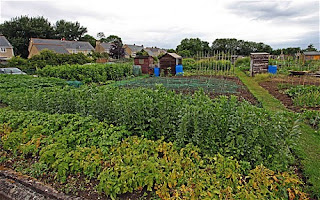 Yetminster, near Sherborne, Dorset is a village I know well.  It's a picturesque wee place and the image of Olde England's rural lifestyle.  Yetminster also has a thriving allotment community (pictured) and the parish council rents the 20 allotments for £20 each to local residents.

One of the allotment holders is 88-year-old Bill Foster, a retired local government officer. Another allotment holder, Michael Bird, informed others that he'd seen Mr Foster take rhubarb from a nearby allotment and contacted the police. The pensioner had never had any dealings with the police in his life and told them he had an agreement with The Rev to help himself to rhubarb.  The Rev confirmed this.

Not to be knocked off his perch, Mr Bird then said he'd contacted the police because "... he was taking stuff from my allotment."

The police said they had been to the village but no offences had been committed. "Words of advice have been given."

If one of England's smallest societies behaves like this in an attempt to oust their oldest gardener, what hope is there for David Cameron's Big Society?

I hope Mr Foster continues to take four sticks of rhubarb two or three times a month from the Rev's patch and hangs onto his allotment until his dying day. If I lived down that way I'd offer to tend it for him if he has any difficulty.

Failing to pick the rhubarb regularly results in it bolting and trying to seed. The older rhubarb also blocks out the light to younger stalks trying to come through. So Mr Foster was doing the reverend a good service.
This big society thing is bound to fail. A few well intentioned folk will eventually get tired of running things and finally blow a fuse when the same slouchers fail to help out while enjoying the fruits of other folks labours. Be it a free library or whatever.
Things will simmer for a few months and then conflict will ensue before people go their own way. It's not rocket science. It's what's happened since the start of civilisation.

Lol. Just read that link to the Daily Telegraph SR. It confirms dumbed down Britain. Did you know...

"Rhubarb, a perennial and seasonal plant, has stalks that are often cooked and used in pies and other foods for their distinctive tart flavour. It is usually stewed and served with custard, or found in jams and crumbles."

Sharing on allotments was quite common when I was a child; my dad might say to a nearby allotment holder "I've got rather more runner beans than I can manage, help your self to a picking for lunch". And in exchange the neighbour might say "help yourself to a caauli when you fancy". No one would suggest that you were stealing if they saw you picking something from another allotment.
Mind you, if I lived in Yetminster, I'd be very tempted to visit a certain allotment one dark night with my "Roundup" spray!

Surely the time has come to grasp the nettle and weed out the root cause of this thorny issue, and then things can return to being a bed of roses, at the allotments.

Heaven forbid you do that English Pensioner, virtually the whole of the USA is condemned with Monsanto's poison.

Unlike the rhubarb, it seems someone was "kept in the dark".

Well done plod. Good to see you are sniffing out criminals tirelessly on our behalf.

I will sleep safer in my bed tonight knowing they are out there harassing pensioners and retired clergy for all they are worth.

That was a peach of a story and I will hedge a bet that you wont be resting on your laurels. I suppose that Bill Foster will be known as the ground elder.

The reverend would know that I should think RM hence his invitation to Mr Foster.

I was about to say the Telegraph has given a definition of rhubarb. Isn't it a sad state of affairs that the Telegraph is reduced to explaining to its readers what rhubarb actually is?

Ep my grandad had an allotment because they lived in a tenement in Dundee and they always shared. It was the allotment culture.

A stinging comment John which a docken leaf of two would calm. :)

Derek, is Roundup banned in the US? Well I never.

Not only that Joe, but there will be a sour taste around the place for some time.

That's what they pay their taxes for Sandy. We're so well protected aren't we?