Greece May Fail But Athens Will Still Stand 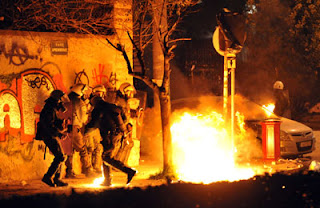 Greece prides itself on the strength of its democracy, but despite the number of demonstrations which have taken place outside its parliament, their politicians like to stress that modern Greeks' enthusiasm for protest shows an 'admirable continuity with the golden age of Periclean Athens'.

Is it any wonder the Greeks are upset with their present situation when their politicians are so utterly blinkered?

Richard North has followed this Greek tragedy for some time and believes Greece's association with the Euro will fail and result in problems for the UK - as if we haven't enough. Yet I agree. There are so many faults within the EU structure which have been allowed to grow out of control with hardly a word of protest from any of the 27 nations.  Let's not forget the EU's auditors have refused to sign off their accounts for some years.  Why isn't that a serious concern of member nations?

Also there is the 'small' fact that one of the member nations hasn't had an elected government for over a year - a record last set in November 2010 by Iraq.  This does pose the question 'is government necessary' but that's for future discussion.

I'm sure many of you will be following the Greek situation with varying degrees of interest but may I suggest you read this because it's written by a Greek.

In the past few months I've read of demands to sell off Greek islands and other assets.  Why not I thought, most of the UK doesn't belong to those who owned Britain of 100 years ago, but long ago the British stopped protesting at being bought out by other countries.

Many of the UK's future heritage sites are owned by foreign companies.  The London Eye is one. Much of Scotland's land belongs to foreigners and we give it away regularly without a whisper of complaint.

The Greek protests are complex but they're similar to what was left to us during the Labour years.  We're not in a position to criticise the Greeks.

The remains of ancient Athens will hopefully still remain in the country's hands, but who knows?  Gordon Brown suggested selling off the white cliffs of Dover to raise money for his extravagance in supporting radical left-wing Labour funding lobbyists.

My bet is that the Greeks don't sell their heritage to others.  They may be bankrupt but the people know what is of value to them.  Their history. They'll protect that stoically and with a determination which has yet to been seen in other countries which have been subjected to the power of the EU.  Ireland is but one example - with its two referenda.
Tweet
Posted by subrosa at 19:52

A myth dressed as a tyranny is having its bluff called - not by so called leaders or sycophant politicians, but by the people who will have to pay for it.

This money game is causing too much pain for those who neither gambled or profited by it and yet now are expected not only to accept the pain, but to subsidise the pot in order to sustain it.

As far as the public is concerned this is a lose-lose situation for both lenders and borrowers with no other purpose than to save the skins of the banks.

Cameron et al, are claiming their austerity measures will balance the governments books in five years - they won't.

Their only hope is that the passage of time will give inflation a chance to make the burden seem less and the austerity measures to meld into the apathy of custom.

If we allow that to happen not only do we pawn the future but we concede victory and power to psychopathic money men.

Whatever Greeks failings they are no more or less than ours and as ordinary people we should stand shoulder to shoulder with them.

"Why isn't that a serious concern of member nations?"

Very good question Subrosa and one I wish Salmond and the SNP would ponder instead of presenting the EU as a place we'd want to be in the future. The billions wasted represent obscene amounts of money and a lack of accountability that is truly shocking and especially in the present climate.

Petem's earlier piece brought out the lack of "democracy" within the system we have here in the UK alone. Tip of the iceberg. The EU is another thing again. They are answerable to no one. Auditors won't sign off their accounts yet no inquiry in the European Parliament? Not a murmur. No expenses enquiries there either. We are fools.

The problem is thatthe Greeks don't have a word for economy. :)

A very thoughtful post Crinkly and one with which I can only agree.

We are fools where the EU is concerned Jo but it will be interesting to see the developments in Greece.

I am at a loss to understand the lack of voice from SNP MEP'S. This stands in stark contrast to UKIP MEP's who are unafraid to challenge the corrupt, anti-democratic, neo-liberal EU.

The euro is going down - my only hope is that the EU follows in rapid succession.

Hi SR. Reading all this and the first thing is that money borrowed at 3% is being loaned to Greece at 5%.And the money goes to various banks, not the Greeks, all they get is the extra 2% interest as EXTRA debt to pay back.
But the money is taken from taxpayers across the EU, the banks are acting only as a conduit for the money,which is from the IMF and the ECB ,which they got from various governments.
Why not cut out the middle men, the banks, deal government to government and save a fortune for us.As Jo G said, the EU is responsible to no one, all take and no give, another giant Ponzi scheme.A beaurocracy damn near as big as the Chinese Army. And now mutterings that China is buying Euro debt? There is nothing in the game for the Greeks but more debt,for them, to cut and run makes a lot of sense in the long run,and Ireland seems to be in a similar situation. What do we the people get from all this ? nothing apatr from being shafted!

I too have noticed when there are serious issues with the EU the SNP MEPs are silent McGonagall. In fact they're silent most of the time. Can't say when I last saw my MEP speaking on television.

Apogee - the use the banks because under the fractional banking system the bank can leverage the money by a ratio of at least 10 to 1.

And the Banks are desperate for this cash in order to keep their hidden stash of bad debts shown as assets in their balance sheets.

The greek in the street knows their opinion counts for little, that politics is a game reserved for the rich.

Swathes of the electorate are bribed with civil service non jobs, corruption is a way of life.

Life goes on anyway whoever is in charge.

But ask yourself the question , who are we bailing out ? Olive farmers , goat herders, fishermen and taverna owners - probably not.

Political elite and bankers ... thats who.

C&a:RAP, Hi there, yes its legalised fraud, its like carrying ten ton of budgies in a two ton truck, as long as you keep most of them in the air by hitting the sides with a hammer you can get away with it, but eventually they will all land.....!
The Sub prime housing racket was the reverse of their creating money out of debt. It never seems to have occurred to them or the regulators that if you loan people with little income ,a lot of money on houses that are not worth the loan or even near it, eventually the system being put in reverse like that will magically "dissapear" the money it originally created !
But people forget that in the States, Fannie May and Freddie Mac
were told by the government to give loans to people who effectively could never repay them.
http://spectator.org/archives/2009/02/06/the-true-origins-of-this-finan .
And now they want to do the same thing to Greece....?

Sub prime lending was very much active in the UK also. Bigtime. Why do you think our FSA allowed borrowing of up to six and seven times a salary, self-cert products, 135% products and worse? It wasn't just in the US, it was here, and how. We should look at Greece and think there but for the grace of God........

Hi Jo,we aint out of the woods yet,I think there are still bears in the woods we don't know about......yet!

Bang on Sandy and that's why the Greeks have taken to the streets - because they know life will only get worse for them.

Although not strictly relevant to a discussion about Greece, can I reccomend the book "The Big Short" by Michael Lewis. It's about the '08 crash, not Greece, but it explains CDS, CDO and how completely flawed the finance "markets" and "businesses" actualy are. The ratings agencies (S&P and Moodys) are show as being a sham - yet everything still hangs on their words. There's been plenty of praise for Michael Lewis and acceptance that his facts are pretty much spot-on. He shows how the whole Wall Street/IMF/World Bank/Goldman Sachs/Lehmans/Bear Sterns is a scam with no social value or conscience whatsoever.

On reflection, this is actually quite a scary book.

I hope the Greek people have the courage to refuse the poisonous medicine they're being told to take by the IMF/EU and their puppet politicians. Otherwise we may all be doomed to suffer years of penury to let the shysters and crooks in the *banking" industry continue in their ways.

C&RAP has it right in his reply - We're being told it's necessary to suffer pain now and that it will make things better in the future. I doubt it will get any better until the whole rotten system is either overwhelmed by it's own greed or when some country somewhere really does cry "enough".

What an insightful comment carrew. You're not the first person to recommend that book and a friend already has it. I think I'm second in line in the borrowing stakes.

I too hope the Greeks have enough strength to deny the bankers their demands.

Yes the comparisons are very evident yet seldom voiced. Funny that.