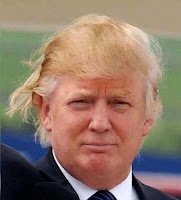 Ever since Donald Trump bought the Menie Estate and dunes in Aberdeenshire, back in 2005, somewhat half-heartedly initially I supported his golf project which he promised would be 'the world's greatest golf resort'.

Over the years I began to take more interest in Trump's golfing paradise and eventually friends who live nearby - and others - convinced me his paradise was only an illusion. Specifically, one friend emailed me last year saying: 'The complex will never be completed.  Only the golf course will rise out of the dunes'. Around that time I changed my opinion.

It would appear my friend has a crystal ball.  Today Trump flew into Aberdeen and announced he is postponing his plan to create the 'world's greatest golf resort'.  Why?  Because of the global financial crisis.  But didn't the financial crisis occur in 2008?  Didn't Trump insist he had the finances organised to complete the project?

Last year two young film makers were arrested because they were intruding on Trump property. Eventually they were released and their film You've Been Trumped was shown in Aberdeen last Friday. Owing to the 'amazing response' it received, the cinema decided to give it an extended run.  Trump has denounced the film as 'a fraud'.

Trump is a bully. His business style may be suited to the American people but it's not welcome here.  His remarks about being inundated with Scots desperate to play his golf course are nonsense.  I live in an area surrounded by golf courses and golfers yet none has shown any interest in the new course. "It'll be too costly" is the usual comment or "St Andrews is just down the road and the Old Course will never be bettered."

Andy Wightman is a highly respected land rights expert who has been keeping a close eye on the Trump development.  He has a website on which he is recording 'Donald Trump's Ego Trip'. Along with other material there are some short videos which show the character of the American and his entourage.

I'll leave you to decide if Trump will ever complete his resort, plus his latest idea of a ballroom. The golf course will open, of that I have no doubt, but the promised investment, both financial and employment, will be a long time coming.  If it ever does.
Tweet
Posted by subrosa at 09:27

I think most golfers will want to try out the course but if it's too expensive won't return. There are dozens of good cheap golf courses in the area already.
I'm looking forward to seeing the film 'You've been Trumped'...

Well RM, I live about an hour's drive from Trump's wonderland and am surrounded by golfers, many who go on golfing trips throughout Europe. Only recently I was in the company of an amateur Scottish champion and his pals and I asked if any would be playing Menie. Aside from the quotes in the post, the other remark I remember was "only if I'm invited and then it would be free".

We have some superb coastal courses here. Why pay over the odds? I suspect the price will be roughly equivalent to St Andrews, if not slightly more. Of course it will be cheaper initially because there is no clubhouse built as the plans haven't been passed and it's to be a wooden temporary building initially.

Now RM, who builds a golf course without putting the clubhouse plans forward at the same time as the course's?

Mr Trump was totally surprised, stung and in his own mind may even have been hurt that the locals did not bow down and prostrate themselves in front of his wealth, even worse, they had raised objections to his grand proposals.

For the first time ever he learnt the lesson that money cannot buy everything or everyone, least of all a few good Scots.

From that moment on, he lost all interest in the project. It was stillborn, and would never see the light of day. So it has been proved.

So he had spent a few millions on a golf course, to him that amount was loose change, and as golf is always a good money spinner, he would soon recoup his investment.
Besides, building that golf course was nothing more than a fit of vindictive pique, it is something which will always be a reminder, a thorn in the side, to those who dared to object to his grand scheme.

RM, I meant to add, if I'd known the film was running all weekend, I'd have made an effort to go and see it. Shame it's not coming to Dundee or Perth.

John, a very canny assessment which will prove to be accurate.

Poor Alex Salmond, I do feel sorry that he backed this bully all the way and believed he would be providing work for the area.

Built for bankers by w-nkers.

Sad really - I thought he'd get further on before the S hit the fan and the North East would end up with Scotland's premier science park.

SR. They've put on more screenings in Aberdeen if you're still interested ( 24 -26th June).
Yes the property development does seem to be doomed. He's getting sued in the US by 300 investors over a development in Florida according to the NYT. Quote from an investor..

"The last thing you ever expect is that somebody you revere will mislead you,” said Alex Davis, 38, who bought a $500,000 unit in Trump International Hotel and Tower Fort Lauderdale"

SR. rain stopped my golf today so been perusing the interwebthing instead. Some off topic but interesting titbits..

The census2011 data has been hacked already. Quicker than most people thought. I thought a year tops ..

Rudolf Hess was actually a woman who worked on 'The Beechgrove Garden'....

The Nimrod strikes back..

UK to be sued over Bahrain massacre..

And finally. The best article I've ever read about Tony Blair..

I live in the area and have had concerns about this from the start, as well as any environmental concerns. That resort was never going to be built and all of the world class jobs stuff was just flannel. Balmedie is notorious for haar and I cannot see how it's going to compete with any of the major courses in Scotland. What's been hilarious has been watching the local wurthies swanning around him like dogs wanting a biscuit. Sadly couldn't get a ticket for the film.

It is sad Crinkly but many in the NE say all he wanted was the golf course.

RM, the only evening I could go is Sunday and when I phoned they said it was already sold out. :( Maybe they'll bring it to Dundee. I'll keep an eye open.

Plenty investors have sued the man and won. He takes years to pay out I was told.

Donald Trump is no more a billionaire than you are I are.

He recently dropped out of the race to secure the Republican nomination for the presidential elections in 2012 - the reason being - "The money on offer for his television show "The Apprentice" was too good to turn down".

If he truly was a billionaire he wouldn't have accepted the offer to continue with a television show instead of trying to secure the Republican nomination - especially at a time he was leading in numerous polls to do so.

Aye not a golfing day RM, even though you're keen. Greens are flooded here I'm told.

Interesting link about Blair. I'll continue reading once I've done the shopping. Aye, you see, the rain doesn't matter to some of us. :)

Aye Eva, many will be wanting their money back because they can't see for the haar.

The film's doing reruns this weekend. Have a look at RM's comment above. Friday 6.30, Saturday 1.45 and they told me Sunday's booked out.

Booked for Saturday lunchtime - thanks!

That's great Eva. I can't manage then. If you get a chance let me know what you thought.

That's a shame but will do.

Thanks Eva. I know my friends up there missed out last weekend and can't go this weekend. Much appreciated. My email address is on the RHS.

SR. Yes it's a good summary of Blair's time in power.
I tried the golf but got drenched so gave up - not a real golfer :)

What a collection of naysayers and nimbys.

EvaW is there no haar at St Andrews or Muirfield?

Pocra quay, the haar burns off far quicker slightly further south. In Carnoustie it burns off early in the day and even earlier at St Andrews. The Aberdeenshire coast is notorious for haar being around all day long. That very seldom happens further south.

Hence the reason for no one deciding to build a links golf course in Aberdeenshire Pocra quay. Until Trump of course who thought he could change the climate.

I just think if he is so rich he really should do something about his hair! I can only think mirrors are banned anywhere near him. He surely wouldn't knowingly go out looking as he does?

Jo, he has the money to look like that. Think about all these women with money who have these horrific breast implants. What will they look like when they're 65?

I read somewhere Trump had had a hair implant. Maybe that's why he keeps it long. :)

"Hence the reason for no one deciding to build a links golf course in Aberdeenshire Pocra quay."

There are 5 links golf courses between Aberdeen and Cruden bay.
two of them champion courses.

I know Pocra, but none are near Balmedie. There are pockets where haar lingers around the east coast and Balmedie is one of them. As a child I spent my summer holidays at Findon which isn't far away and the haar there would last well into the afternoon at times.

The golf courses I mentioned are within 4 or 5 miles of Balmedie.

Findon is 20 miles from Balmedie .

Subrosa please accept I not making this up to score a debating point.

by the way I read your blog most days and think it is one of the best blogs on Scotland and future.

Pocra quay, thanks for the compliments. I'll have to talk to the resident golfer who has played the courses up there and I know last year one match was called off because of haar at somewhere.

You can tell I'm an avid golfer groupie can't you? ;)

Thanks to Wikipedia, I now know what haar means.

I thought you were referring to Trumps syrup in a rural American accent.

I'm surer that Donald (now that's what I call a comb over) Trump ever intended to run for the Presidency. I'm sure he was encouraged to do what he did by factions within the Republican Party who wanted to embarrass Obama about his Birth Certificate. The republicans want to keepo evryone guessing about who the candidate will be. I know who you'll be thinking it is and she's playing a blinder as a decoy at the moment. It may well be someone else who breaks cover and goes for it.

Donald, I feel, fronts the best Apprentice programme. The tasks are bigger and the stakes higher. Pity ot's just a game show rather than a real business insight programme.

I'm sure Donald would be quite happy to sell memberships to anyone but his real target may be the American market.

Ooops sorry RWG, I should have put a translation to save you the effort. :)

Petem, his target will have to be the American market. I can't see many Scots joining because as Pocra quay says, there are plenty good courses around the area already.