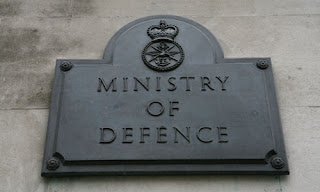 Another two British soldiers have been killed in Afghanistan the MoD has announced.

One serviceman, from the Royal Electrical and Mechanical Engineers (REME), serving with the Royal Scots Dragoon Guards, was killed by a bomb on an operation in a mission in the Gereshk Valley area of Helmand Province. He was trying to rescue a vehicle which had been hit by another blast.

The second serviceman, from the Parachute Regiment, was hit by small arms fire. No further details were issued.

Both men were killed on Thursday.

These two incidents bring the total number of dead is this completely politically motivated war to 373.
Tweet
Posted by subrosa at 07:47

It should be 373 of those spineless MPs who voted for that pointless excursion, who should have ended up in coffins, rather than any of our brave service personnel.

Who cares they are all volunteers and help control the Afghan drug production.

This will only improve when we have politicians that stop mistaking "village coppering" for "military force".

It is not that we can not win in Afghanistan, it is the "You can't climb a tree, you might get hurt" attitude of the Western "Governments" that is the problem.

Joe, I have often said that if we went back to the old way, where "leaders" went to fight with their troops many of today's leaders would not so recklessly engage in war. Not if their own lives were at risk.

"It is not that we can not win in Afghanistan, it is the "You can't climb a tree, you might get hurt" attitude of the Western "Governments" that is the problem."

I think that's a weird statement. Are you saying our troops are molly-coddled? Presumably the Russians were too.

It's those left behind too Joe. 373 plus thousands more.

I care Highland Cooncil. Without volunteers you could well be recruited and with your attitude I'm pleased they do volunteer.

We could 'win' as you say Furor, but it's common knowledge within military circles that as soon as 'help' leaves, the Afghans will return to their own ways.

I don't think your 'you can't climb a tree you might get hurt' is correct. The military's actions out there are tightly controlled by politicians who won't let them do their job effectively. Maybe that's what you mean.

On a day when it is announced that the Kabul Bank, the national bank of Afghanistan, is about to go bust with some £800million of debts; and that the Americans are already in talks with the Taliban - One has to ask what has this war/police action been all about.

Once again our brave young servicemen are expected to lay down their lives in order that the politicians of our nations continue to ‘save face’ by supporting an inept and corrupt political system under Hamid Karzai.

@ Highland Cooncil
Who cares … - I feel sure that as you reflect upon the words you have written you will come to regret them. If you do feel that what you have written is accurate, I challenge you to stand in the middle of Cameron Barracks or Fort George and repeat them, many Highland families might disagree with you.
As for drugs in Afghanistan – when Russia invaded Afghanistan it was covert departments of the USA that stimulated and encouraged drug production – simply in order to undermine Russian military by creating large number of addicts. It worked, but it worked too well, the Americans had created a monster they could no longer control. The warlords and politico’s of Afghanistan realised there were fortunes to be made in the drugs trade. Now all of Western Europe is a market for Afghan heroin. The Americans are relatively immune, there drug problem lies mainly with cocaine from South America.

I don't think your 'you can't climb a tree you might get hurt' is correct. The military's actions out there are tightly controlled by politicians who won't let them do their job effectively. Maybe that's what you mean. XX

That is exactly what I mean. The attitude is that of the politicians. Not the troops.

The politicians want it both ways. They want an army out there, but are only allowing them to act as "village coppers".

Pull them out, or let them fight. It is, after all, what an army is supossed to be FOR.

Personally, I would pull them out. But whilst they are there, then they should not have one hand tied behind the backs by "Governments". (Who were never even voted for in the first place.)

Thank you for mentioning that John. I'd published this post before I was aware of the bank crisis which was no real surprise. Most of these countries which are given vast handout for political reasons are bankrupt.

I agree with every word Furor. That's a first isn't it. :)