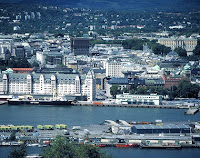 Oslo
Here in Scotland politicians often mention Norway, also an oil producing nation, as a successful small country and by all accounts it is.

Its economy also relies on forestry (which occupies 26% of the country) and fishing yet agriculture hardly features at all - 3% of the total area of the country in comparison with 75% in Scotland, making Scotland far more self-sufficient foodwise. Hunting is still as much of an necessity as a sport in Norway and their diet is high in venison and fish.

One of the differences between the two countries is the stable economy Norway enjoys with its oil fund creating financial security for many years to come. Wages are higher than Scotland but so is the cost of living.

Another difference is the attitude of Norway to the EU.  Norwegians have no desire to belong to the EU and are perfectly comfortably with their current arrangement of being a member of the EEA (European Economic Area).

A very recent poll reports that Norwegian opposition to joining the EU has reached a new high with almost two-thirds of voters opposing the country's accession to the bloc.  Only 25% of people were in favour with 8% being undecided.

Norwegians have twice voted against EU membership, in 1972 and 1994.

Perhaps it's time Scotland had a closer look as to why Norway continues to reject becoming an EU member. The issue is important to Scotland's future and the SNP's policy on Europe needs to be discussed openly.
Tweet
Posted by subrosa at 20:11

The snp are EU supporters in the same way some Unionists cling to the union as the one guiding light in their life..........
You sound just like the Ukippers in the English Tory party with about as much influence on the snp policy towards an even more closer 'Union' with the EU.


Not the least significant aspects of the story is how it came to light: through the diligence of a group of local bloggers, including Barnet Eye, Mr Mustard, Mrs Angry, Mr Reasonable, and Vickim57. The bloggers started their investigations after one of them heard that a MetPro employee had been boasting privately about how citizen journalists in the borough were being filmed at council meetings and their blogs monitored.

One of Norway's advantages is its immense Hydro-electric capacity/capability.

"Perhaps it's time Scotland had a closer look as to why Norway continues to reject becoming an EU member."

Perhaps, SR it is time the other 26 members of the EU had a closer lok as to why Norway continues to reject becoming an EU member, especially the UK?

Well you should know about unionists clinging to the union Niko. :)

A very interesting link Niko and it shows bloggers are on the right path.

Of course Hydro is renewable Joe. Once the initial massive investment is made of course and I think I wrote about just how much it adds to the countryside (here anyway) with its architectural buildings etc.

Ah WfW, I wouldn't dare presume that England should think in this way. ;)

To be fair the 1994 Norwegian referendum on EU membership was a pretty close call, resulting as it did with 52.2% of voters opting for ‘no’ on an 88.6% turnout. It’s hardly a resounding endorsement of the idea that “Norwegians have no desire to belong to the EU”. A recent poll with a sample size of a thousand is hardly a reliable indicator of opinion in a nation of almost 5 million souls.

Of course, the status quo is helped by the fact that the Norwegians already enjoy most of benefits of the EU without being actual members. The EEA grants Norway access to the EU’s single market; it’s also member of the Schengen area and has been granted certain participation rights in several EU programmes including the European Defence Agency, Europol etc. Needless to say Norway’s trade is dominated by the Union - with all the benefits that that entails – which simply wouldn’t exist if all member countries decided to pull out as so many seem to advocate.

Which also raises an interesting point. If an independent Scotland – or the UK in its current form, for that matter – decided to withdraw would it be allowed to benefit from the same generous terms of association that the Norwegians currently enjoy?

"The issue is important to Scotland's future and the SNP's policy on Europe needs to be discussed openly."

Couldn't agree more...although there may be a fair wee exodus of worms if this particular can is opened.

From an English perspective, there is a strong view that the politicians in Scotland who want independence still believe that there is a crock of gold at the end of the EU rainbow and as an "undeveloped country" they will collect all sorts of grants of the type which made Ireland the "Celtic Tiger" some years ago.
And nothing will prevent the cynic in me continuing to believe that senior politicians favour being in the EU because of all the lovely highly paid tax-free posts that they might aspire to provided they continue to publicly support the EU. I just can't understand where Blair went wrong (as far as the EU is concerned, that is)!

Hello Keith. I see your point but the EU has changed radically in the past 7 years and we all know that. So do the Norwegians.

Your last paragraph is what I think politicians should tell us. Maybe some in England would also be interested.

Aye Sheila and I think that's why the brick wall at present. Too often I hear "Scotland is very pro the EU". I don't know many folk who think that way.

EP that's a common opinion here too, at least within my social circle.

I should think the EU would be delighted to get rid of the UK. Of course Cameron will never give them that choice. America wants the UK in the EU and until they announce otherwise that is where it will stay.

I think though that America will have little interest in where Scotland goes and what it does after we get away from the UK.


The deal that Norway has sounds good, but as that redoubtable Norwegian PM Gro Harlem Brundtland said, the trouble with that is that you have to comply with most of the EU conditions, but you have no vote at the top table, and no veto.

Still you also, I imagine don't have to pay, and if you are a rich country like Norway, that's probably good. It's also good if you are a country like Norway or Scotland, where government money does make its way down to the poor. In England, where a great deal of the money seems to be wasted on the great and the good, and doing America's bidding; it's not a bad idea to have some European finding coming back from the payments. At least that way it is redistributed down top ordinary people.

Strange you should say that Tris. I've just finished reading "The Fifty-First State" by Hilary Bailey. An intriguing political novel (available through your library) and I recommend it.

I must do a bit more research on Norway's relationship with the EU and see how much it costs them. A veto and no vote may be a price worth paying, especially since it seems France and Germany dominate it anyway.

Oh I don't think the EU would want to rid themselves of the UK. Which other country jumps when given the command?

Quote : " Hunting is still as much of an necessity as a sport in Norway " - bit of an exageration there - in a few sparsely populated areas, perhaps - otherwise, no ...

As a Scottish ex-pat in Norway (been here for 14 years now) I can vouch that the average opinion is much more strongly anti EU than a decade ago ...

My personal assessment, is that "EEA" status is a net cost to Norway, and it's the Politicians who want to be a full EU member, not the population at large ...

When I used to visit regularly around 20-30 years ago Chief Sceptic, hunting was as popular there are angling was here, but of course mainly in rural areas. It was essential folk were able to have enough meat to see themselves through winter.

Aye that's what I gathered from this report and others I came across when researching.

Ah so it's the politicians who are pushing for it. Fortunately they at least offer a referendum but there doesn't seem to be one on the cards in the near future.

I'm slightly jealous of you living there. :)

On a point of accuracy the photo you're using is definitely not Oslo. I think it's Austin, Texas, USA.

Thank you for pointing that out hk. I found it on google and it said it was Oslo. Will amend it. Thanks again.

Looking at it from a generally pro-EU position I can understand why Norwegian antipathy would be great now than 15 years ago, what with the current woes faced by certain Eurozone countries and the expansion of the Union into Eastern Europe. In that I think we do agree.

Something else to think about - should all costs and benefits of the EU be measured in purely economic (i.e. monetary-style "what's in it for us?") terms?

How else could it be managed Keith? Money is the only measurement out world leaders want to know.