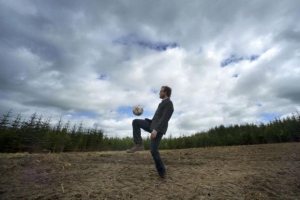 I haven't bought a lottery ticket for years but I know plenty people who faithfully spend their £1 or more every week and good luck to them.

If I remember correctly the UK National Lottery's policy is to give to good causes and even in this quiet outpost there are a couple of projects which have benefitted from people's weekly flutter, but none to the tune of £460,000.  Surely a project which is funded by nearly half a million pounds must be extraordinary?

It is, but only insofar as it's also one of the most bizarre.

The money is for the most expensive 'artwork' to be unveiled in Scotland.  What is it? A portrait of Alex Salmond? A bronze of an Edinburgh tram before they're rented out because they won't be used in our capital city 'for some years'? Elaborate gates for our future border control?

Some of you may say one or all of the above are plain stupid ideas and I won't argue, but they're certainly more sensible than the artwork which is part of the finale of the Cultural Olympiad - a celebration of the 2012 Olympics.

Craig Coulthard, an Edinburgh based artist who won the bid to create one of the 12 public art commissions, wanted something which 'invites us to consider what it means to be British and what it means to be Scottish' (he's covering all angles).  So Mr Coulthard came up with the idea of building a football pitch in the middle of a forest. An unusual idea but interesting - until I read that 'The Forest Pitch' will only be used for two football matches then the pitch replanted.

The pitch is currently being prepared in a spruce forest on the Buccleuch Estate near Selkirk and the felled trees will be used to create seating for the spectators and a shelter which will be used as a changing room for the football teams.

The teams which will play at the two matches will be made up of a diverse group of players, all of whom have taken British citizenship since 2000.  Not being a football supporter I'm unsure if there are four complete teams composed of those who have recently become citizens and if that is the case, the team players won't have had much 'bonding' practice.  Still, it's a worthy idea to use sport as the project subject.

What leaves me shaking my head in disbelief is that £460,000 is to be the cost of 180 minutes of football on a pitch which will then be destroyed.  The only public who will benefit are the teams and spectators.  Oh, and the Duke of Buccleuch of course.  Replanting the pitch will carry a hefty price tag.

Public art? I think not.

Is that why the Lottery is called "A Tax on the Stupid"?

Tell me you are making this up! This must be a late April fools joke surely.

Ah, but SR, this places it firmly in the category of a 'happening'. Many of todays 'public works' artists were trained by the flower children of the 60's - ephemeral is good!

The PTB are probably patting themselves on the back over the amount of employment this useless exercise will create - however temporary, it will tick all the right boxes.

Dubbie, surely the Herald wouldn't lie to us would it? Naw, it's ridiculous enough to be true.

This must be yet another variation on that classic children’s fairytale ‘The Emperor’s New Clothes’.
The Lottery Fund, the Cultural Olympiad, the Scottish Arts Council and all associated ‘off the wall’ arty types – should be sectioned.

This total nonsense will not be seen by a single member of the public, only by a few carefully selected amateur footballers, a few invited ‘special’ guests and a financially enriched Mr Coulthard.

Oh!... I tell a lie… a few people flying in the Edinburgh to London shuttle at 30,000 feet may just catch a glimpse as they fly over the Buccleuch estate.

Macheath, I was a flower power child/teenager and I'm horrified at this waste of cash. Where's the legacy? They used to have statues and bronze busts.

You're right of course, with the diversity etc it will tick all the boxes.

JRB, I wondered if it was me who should be sectioned because I've lost my appreciation of public art. :)

Just imagine what £460,000 could do in our small towns if it was carefully used.

Careful use of public money is no longer an appropriate term.

Half a million pounds for a symbol of insanity and a nice wee earner for the Duke.

True enough, it is a symbol of our times-even its impermanence.

Well said Crinkly. I often say my generation has made the best of this country (to a degree) but I've never heard of this being public art.

'Ang on a minute, this is around £1,000 per player for two games. Compared with the Premiership it is very cheap, even if you have to cut down half a forest. It is still a waste of money but isn't that what governments do these days?

Dare we ask who (exactly) considered and accepted the proposal?

What were the alternative proposals, and who made them?

Is there a written rationale of the reasons for acceptance of the proposal? and reasons for rejecting the alternatives.

Who are the contractors, how were they assigned, and by whom.

(the devil is always in the detail).

At the risk of sounding crude, the expression 'Pissing money up the wall' comes to mind.

Who are these idiots? Well, not the so called 'artist' obviously!

I have a proposal for an avant-garde piece of performance art entitled "Money Doesn't Spend Itself IV." My post-ironic concept is to run a public library filled with books to enable visitors to experience for themselves the ongoing satisfaction of learning both for practical reasons and for its own sake. To achieve the full impact of the artwork it would have to be copied in every neighbourhood in the country.

It's an obscene waste of money.

It is what governments do Demetrius, but I would have thought our civil art mentors would have been more productive.

All I can find is what's in the article and the link MacPuddock. It would seem the Cultural Olympiad had to bestow some money on Scotland and they weren't bothered how it was spent.

MacPuddock perhaps someone will find more detail and post links.

It wouldn't surprise me if the Duke has organised contractors etc.

That's not crude Charles, it's realistic.

What a great idea Brian. If you need a volunteer just ask.

It is Woodsy. I'm sure all of us could find a far better use for the money and give a more fitting legacy to the Olympics.

Sounds like a total waste of money to me, it's achieved nothing really.

I support and enjoy art be it literature, music, dance, fine art, sculpture and installations etc. So I'm used to seeing the strange, weird, offensive and just plain staggeringly wonderful.

Use the money to create something permanent that's fun or intriguing. Like the installations along the M8 (the pyramids with the dyed red sheep or the heads made out of scaffolding poles).

Or even some sort of tongue in cheek installation of a giant ballot box with "we've gone and done it now" written along the side.

Anything but the football in a forest tosh. And the £459,000 change left over after doing the ballot box well we could even spend it on something meaningful.....

Glasgow City Council switched the status of many of its concerns to "charities" in order to benefit (and how!) from the Lottery Fund. We're talking millions incidentally. This was NOT what the Lottery was meant to be about.

That's happened all over the UK Jo and I find it despicable. However some councils have been a lot more greedy and underhand than others. One being Glasgow of course.

Just thinking something similar is being done in London for a couple of weeks running about and jumping at a cost of, was it £12 billion?
Guess its all relative!

Haven't they managed to sell off one of their pitches to a football club though Apogee? Possibly for peanuts right enough.