A Teacher In Russia 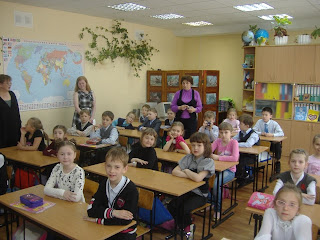 
Stephen Beet, a friend of mine, teaches in Russia. He was teaching here in the private sector but found that political correctness and state influence was creeping in and making things much the same as in the state sector which he had left.  The following is a copy of a letter he sent to me which is self-explanatory.

It was very interesting for me to watch and to take part in your several English lessons with your students both during my last visit  to Tomsk in October/November last year and again over the past few weeks when you invited me to the 9th 10th and yesterday to the 7th and 8th classes.

It was a great pleasure to me to witness your pedagogical skills and those of your comrades.


As you know I have taught in the English system for over 25 years and have, in England, -- both in state and public schools - witnessed a very sad decline in the standards of  teaching and of learning expectations, not to mention the shocking behavioural problems that are to be found in British schools  and society today.


In Britain people think these problems can be  solved by providing more money for equipment, but in fact this is not  the case.  What is needed in Britain is the Russian system of  Education and the dedicated teachers.


I am always amazed at how well your students learn and know the English language and have a sound knowledge of so many facts  Of course, it is true that the Russian English text books are far better (and contain far more texts, grammar and vocabulary) than those used in Britain. In your school and classes I always note the great interest, friendliness and positive attitude of all the students and  the teachers who expect the students to learn and memorise sound knowledge in order to pass strict exams.

It is a pity that British educationalists do not study the methods used in traditional Russian schools, and I very much hope that Russian methods are never changed to try to copy the liberal systems of the  west, the aim of which seems to be to destroy learning, art, culture,  responsibility and community spirit.

I very much hope that it will be possible to visit your school and your classes again as they are a great inspiration.

Whilst Britain the not the only country where the standard of education is declining and becoming politicised, I don't think that it is only Russia that is maintaining high standards. I get the impression that education in France and Germany is still good compared with ours, and when we had a holiday in Bulgaria last year, I was highly impressed by the standard of education of one of our guides who was studying at University. In recent world league table, Australia scored quite well, as did Singapore.
I think it's just us, and possibly America which was where many of the trendy ideas originated!

I think Scotland and England have slid down the tables faster than any other European countries EP.

The reason for Edward's post was to emphasise the decline of our systems even though so much money has been thrown at it.

Hi SR, I think the letter writer is correct. But I wonder if Political Correctness and labour attitudes are not a root cause of the drop in standards. It seems the problem, coupled with lack of discipline really became obvious at the start of this century.
Unfortunately some of the teachers are not helping.

I finished my secondary education in Canada and was quite amused when, upon returning to Scotland, I found a dismissive attitude towards any other country's educational system. I knew that Canada's educational system, at that time, was far superior to anything Scotland had to offer. Unfortunately Canada has now taken the "dumb down" approach, and graduates of even the best universities are as thick as a brick.

The basics are missing. Ask almost anyone in the west to sketch a rough map of the continents adding the positions of countries and they are lost. Ask them for a general outline of the history of the world over the past six thousand years and a glaze forms over their eyes. Ask who was Gamul Abdel Nasser, Kemal Ataturk, Muhammad Abdul Jinnah, or even John Maclain or Tommy Douglas and you are met with a blank stare.

We are faced with a know nothing electorate who are fooled by sound bites and posturing no matter their supposed educational attainment. Their knowledge of the world, of history, of reality, are circumscribed by the television shows they watch. If Oprah said it maybe it will stick.

While I agree Apogee, I think the decline started when we moved away from basic learning such as reading etc. Introducing all these fancy systems were of no benefit to pupils yet it took schools years to drop them, only to replace them with more.

We've had a very snobby attitude to our education system McGonagall and dwelt far too long on the accolade of being the first country to give children free education.

We forgot to build on it an complacency has thrived with just a little tinkering at the edges.

You're right about standards. More and more I'm convinced that so many university courses do not need 4 years and quite a few could be completed in 2.

I wonder to what extent the current Russian teaching methods are based on those the UK used to have?

Take money and political point scoring out of the mix and replace them with motivation and innovation.

Then, not only will we get more bang from our bucks but we will get more - with interest - from their progeny as well.

Do you ever wonder why governments continually are content to fail in the investment they afford to the renewable and infinite asset they as individuals spring from?

Since Scotland was the first country to legislate for free basic education for all children, I would think Russia kept an eye on the system and progress. Unfortunately the system which worked is no longer and progress - well what can I say Woodsy?

Yes I do wonder Crinkly and have yet to come up with an answer which satisfies me.

Could it be the poor make us all feel better for having the little we have?

School standards in Germany.
My colleague who edits
www.german-foreign-policy.com
attended the German equivalent of a grammar school and must now be in his forties.He tells me that school authorities recently decided that Latin translation was "too difficult" and so all children were awarded an average mark in the subject.

My wife sends him "Dumb Britain" and "Colemanballs" from Private Eye for Christmas but he reckons that Germany may soon overtake us in this direction.

I think he's just being polite and kind!

It could well be Crinkly.

Ah, so Germany's going down the same road as us Edward. I must have a talk with my German friends about it.

My letter to Elena Petrovna was read to her classes and I have just received the following message (on vkontacte - Russian Facebook)from a 14-year-old boy in the 8th class:

"hello,I am also glad to see you!I am normal today. .Today Elena Petrovna read us your letter. We very much liked what do wrote!
Yefim.

Hello Stephen. Don't occasions like this show just how valuable your vocation is to so many children? Unfortunately few in this country realise that.

Yes, that's true subrosa. I posted his message exactly as received to illustrate that despite his difficulty using English tenses (in Russian there are far fewer) he writes perhaps nearly as well - with his three English lessons per week - as children of similar age in Britain. Or am I being unfair to the British system?

Another important consideration is the high esteem (despite low pay)in which teachers are held here. There has been a decline, of course, since the collapse of the Soviet Union but hopefully things are improving again now.