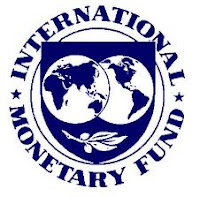 The title should read 'One Man's Poison Is Another Man's Meat' if the newspapers are to be believed.

While the erstwhile head (although he hasn't officially resigned as yet) of the IMF languishes in a NewYork prison, Mr Sarkozy snr the father of the current president of France, announces his daughter-in-law is pregnant.  Quelle surprise.  Commentators are suggesting the news could spark the president's resurrection after his poor showing in the polls in recent months.

In honour of Strauss-Kahn's fall from grace a pack of would-be successors wasted little time yesterday maneuvering for his job. The Spiegel has taken the trouble to run a photo gallery of possibly contenders for the IMF leadership.  Number four seems familiar.

One point I do find remarkable is that France has no extradition treaty with the US. How did they manage that?
Tweet
Posted by subrosa at 09:24

"Commentators are suggesting the news could spark the president's res-erection"

Ah Richard, you caught me out there - for just a second. :) Good one.

They managed it by saying 'non'. The french (like New York maids apparently) sometimes do that.

Pregnancy is a handly tool for politicians. Blair pulled the stunt, as did Cameron. I dare say Kate Middleton will be with child soon and Cameron will bask in the reflected glory. Or maybe Gideon will persuade his wife that it would do his popularity some good.

Damned if I understand it. It's just sex. People do it all the time. Even prime ministers and presidents. Woop de do.

But they have worked out that people's hard hearts are softened by the thought of a baby.

Not mine. Sarkozy is a creep and how Carla could bear to be in the same palace as him is a mystery to me. And Blair and Cameron are vomit enducing, new fathers or not.

Saw the eleven said to be in the running, but where is Wayne Rooney?

btw, the current Franco-American Extradition Treaty came into operation in 2002 replacing the 1909 version.

Hi SR, and that is an interesting document Brian. Seems if I read it right that France is not allowed to extradite its citizens.
So the thought is, under EU law could the UK ask for the extradition of a French citizen?
Be nice if our own country had used the same stipulation.

I think its shocking the way this issue is being handled. Whatever happened to innocent until guilt is established?

Seems he has so many priors on this that he just has no credit left.

I'd love to know the political outlook of the candidates.
DSK is a left winger who was proposing to stand for the left in the French Presidential election. Gordon Brown is obviously one. I get the impression from what I have been reading that most of the others lean to the left, which, I suppose, is why they want to work for an organisation which spends other people's money.
I think Cameron should nominate a good right-wing politician who might say "No" to more spending. Of the present MPs, John Redwood would be my choice.

I've never been taken in either by the 'baby' syndrome politicians use Tris.

Aye Brian, someone mentioned that today. Thanks for the link. It's a lengthy jargon document isn't it.

Exactly Jo and that shows, to me anyway, that there's far more to it than meets the eye.

His past possibly gave the excellent scenario Apogee.

Yes EP, I had a look at their affiliations and all seem to be to the left.

John Redwood wouldn't be a bad choice. He does rather well with pulling up even his own colleagues.

Its not looking so good Subrosa. Seems he's changing his story to say what happened was with consent. That has come about after the original complete denial.

Having said that its quite astonishing that so much about the incident and the victim is all over the news there even before this woman goes before the Grand Jury. I'm assuming they don't recognise the old sub judice thing in the States.

It isn't Jo and his memory isn't too good either.

It doesn't seem so but I know next to nothing about US laws.