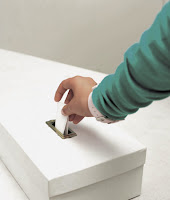 Only two more days of campaigning and then Scotland goes to the polls to elect the next Scottish government.  Part of the process is ensuring parties manage to usher their supporters to the local polling stations and to ensure, as much as is possible, they put their marks in the correct boxes.  I've had a pamphlet showing me a paper and where I ought to put my crosses if I want to vote SNP.  Good idea, especially when there are two papers if the AV referendum one is ignored.

It's been a long haul for the SNP, particularly since the campaigning seemed to start last year when they weren't many people's cup of tea, but they've fought against the negativity, lies and criticism with a professionalism few, other than their supporters, thought they possessed.

The latest poll has been analysed by the Peat Worrier with the Burd insisting it's going down to the wire.

After Sunday's rather feeble BBC leaders' debate in Perth - described to me by a gentleman sitting on my left as "a' gravy and nae meat" - it is very disappointing that the electorate know little more than they did at the beginning of the process, but that's modern politics.

Labour's new mantra about independence does them no favours. Scotland knows that the SNP cannot proclaim independence without the support of the majority of the country and even then it will require a certain amount of goodwill from Westminster to begin the journey.  Alex Salmond is correct when he says the Scotland Bill is a priority.

Baring any serious incidents in the next 48 hours, it seems probable that the SNP will be returned for a further term.  Considering their opposition during the process it's little wonder.

As for the AV referendum, this is the Rich and Mark have it perfected.
Tweet
Posted by subrosa at 09:31

I agree with every word you write here re the Scottish general election.

I'm surprised, however, that you follow that unreconstructed unionist Guido in his contempt for AV. AV is a tiny step forward but it is slightly less awful than FPTP. What's more to the point is that Clegg will get his well-deserved kicking in the constituency and list votes.

OTOH, a YES vote on AV would deliver two well-deserved kicks at the two main front men of the No2AV campaign: Cameron and the politician who did more than anyone to put him there, by scuppering the possibility of a rainbow alliance, John Reid.

What I don't understand is why so many in Scotland seem determined to spoil their AV ballots by leaving them blank and writing INDEPENDENCE on them. It may just hurt the L-Ds a little more than they're already due to be hurt on Thursday, but it will bring comfort to Reid and Cameron. OTOH, voting YES and writing INDEPENDENCE on the ballot will hurt both of them, since the vote will still be valid provided it doesn't identify you personally.

With the turnout in England likely to be very low, it might even be enough to grant overall victory for YES despite England voting NO. Alternatively Scotland may vote YES but be overwhelmed by English NOes. But either way would emphasise the fault lines in UK politics.

The only thing not to like is if Scotland votes NO thanks to the spoilt ballots. With the FM on record as saying he will vote YES and the SNP - whilst justifiably deploring the date of the referendum - formally recommending a YES vote, I cannot for the life of me understand why some SNP supporters want to throw away this opportunity.

And as ROGER MEXICO aptly put it on UKPR: everyone also misses the real point about AV (and for that matter STV). You can put the person you most hate, loath and despise at number 10 or whatever. Then you work your way up, numbering down, through the repulsive; the unpleasant; the mildly nauseous; the merely incompetent; the unknowns; the known unknowns; the OK in a really bad year; the people you could just about send out for chips; the sort of literate; the sort of numerate; the occasionally coherent. Then, if there’s anyone better than all that left, you give them number 1.

AV may not help smaller parties or bring proportionality, but it does allow the voter to express his or her true choice while still making the vote count. First preferences by party will also be counted and published, which may well help those smaller parties next time.

Any thing that has any potency to remove 'the safe seat sycophants' is a step in the right direction.

Crinkly & Ragged Arsed Philosophers
"Vote Yes for AV - then any comment you like, clear of the boxes."

Thanks, and quite so. As Moridura puts it: A year on, remember the man who let the ConLib Coalition have power - John Reid.

First flaunting yourself in shorts, now baring.
Have you no shame?

Yep, I agree with everything Barbabenzero said as well regarding AV. Having said that, I'm sure Dr Reid wasn't alone in scuppering the "Rainbow coalition". Didn't that other prominent No to AV supporter Tom Harris appear on the News networks to voice his disapproval of any coalition with the SNP...

Allan, you're quite right that Reid was far from alone in regarding a tory government as less awful than allowing those pesky nats to help Labour. Wendy's brother was another.

My point, though, was that Reid has also become the leading Labour face of No2AV and deserves mud on his face more than most.

Great post Barba: like you I was horrified when I first heard some suggesting the AV ballot paper should be endorsed "Independence". That is nothing but a spoiled vote and has no value whatsoever.

Harris, like many in his own Party, spent the time since his beloved former Leader's departure working with his fellow Blairites to undermine the new Party Leader. Such behaviour, no matter what their view of Brown, sent a clear message to many about their idea of "unity" within their Party. It was utterly disgusting. It also contributed to their defeat among other things. No one is reassured by a Party of backstabbers who will actually damage their own Party's chancers through infighting if they don't get their own way. And of course we've seen similar conduct from Labour at Holyrood: look what his own did to McConnell, look what they did to Alexander.

At least Alex Salmond when he says, "My Party are behind me." doesn't need to break out in a sweat worrying about how many have daggers in their hands.

Barbazenzero, I enjoy clever satire and I thought that cartoon was such. The AV issue has been poorly presented from both sides and whilst I appreciate your explanation, I feel the changes proposed are minimal.

As for the suggestion that Scots spoil the paper by writing independence, I think that is wrong and that's why I have not promoted it. In fact your comment would be worthy of a post in itself to explain how silly the idea really is.

Thanks for the link Barbazenzero.

No shame at all Hamish. Disgraceful isn't it.

He did Allan and he did in some social networks.

Jo, you trying to persuade me to vote yes too? :)

"I enjoy clever satire and I thought that cartoon was such"
Fair enough. The cartoon itself would be a fair argument for AV were it not calculated to persuade Guido's audience to vote against this tiny step forward in democracy out of spite for Clegg.

Easy to be wise after the event, but I do think you could have mentioned Guido's unremitting No2AV bias in addition to your "have it perfected".

I think most folk will be aware of Guido's campaign Barba. Guido isn't one of my regular reads these days and I rely on my readers to tell me of 'unusual' news on his site.

You never answered my suggestion that your previous comment would make a good post. Would you mind if I used it later?

You're right re your "regulars" but perhaps not re "casual" viewers redirected from elsewhere.

But I accept that it was at worst a minor misjudgement and perhaps I over-reacted.

Feel free to use my ramblings however you wish.

One final thought on this is that you could use the cartoon itself to point out that a Yes2AV would allow you to vote in precisely that way, contrary to Guido's wishes!

Thanks Barba, good idea. I'll put something together later for this evening.

You're welcome, and having reflected on my last post I have squared the circle and now realise that you were correct in calling the cartoon perfect. It is: a perfect paradox.

Subrosa, definitely. I'll be voting yes. AV isn't ideal but we have to start somewhere and FPTP is positively corrupt as far as I'm concerned.

Still haven't decided here Jo. I'll let you know what I do though.