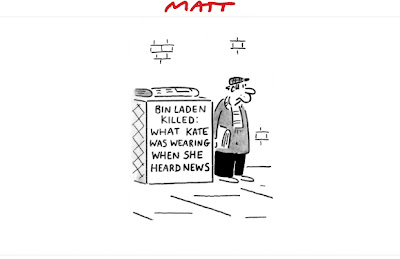 I suppose the the Star's headline would be:-

Bin Laden shooting not expected to affect tourism in Aberdeen.

Well! What was she wearing?

Bloody half cocked media -only giving out half the news.

No; I said nothing about Will ah said MEDIA! Bloody hell, the price you pay for being a loyal royalist.

The Mail's would have been...

Anyone thinking how bizarre it is that the US has claimed to have found and killed the world's most wanted man and we don't even have a body or absolute proof they got him but only their word for it?

If any other country, especially a Syria/Libya/Iraq/Iran/Afghanistan made the same claim would the Americans just take their word for it? I'm thinking not.

Did our security services know in advance? Was that why William and Kate stayed in Britain?

I know Crinkly, it's worried me all evening wondering. I shan't sleep.

Thanks for that CH. This post was meant as a little light relief.

He he Allan, I shouldn't think you're far wrong there.

Jo, I've been saying the same since yesterday. All rather dodgy isn't it? The media show pictures of Obama watching the operation live. Have you ever heard of a head of state watching a military event like this? Is Obama regularly watching the live bombing of Libya?

Naw, more questions than answers for me.

Oh Tris, you'll be called names for that one.

Just thought I would drop by and say hello - you have been SOOO busy with the election in your parts of the world.

I too was amused by Matt's cartoon. A little cynical perhaps? No! Typical of the MSM (not Matt).

I wonder what was on page 3 in the Daily Sport?

Junican, how kind of you to pop by. Yes it has been hectic, but I'm sure all my friends now know which way to vote. :)

Does the Daily Sport still do page 3 illustrations? I must have a wee look.