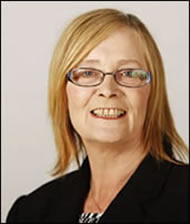 On Wednesday Tricia Marwick was appointed the first female Presiding Officer in the Scottish Parliament.

Tricia is the SNP SNP MSP for Mid Fife and Glenrothes and she defeated Hugh Henry (Labour) and Christine Grahame (SNP).

I remember meeting Tricia in 1999 when she was first selected as an SNP candidate for the 'new' Scottish Parliament.  She was completely down to earth then and I doubt if she has changed.

On Wednesday's Newsnight Scotland a Labour ex-deputy presiding officer criticised the election of an SNP MSP to the position and other unionists MSPs don't like the idea that the SNP government, which now has a majority, 'is not willing to see the important office of presiding officer held by one of the opposition parties'. source

In line with parliamentary rulings, Tricia has resigned from the SNP for the duration of her presidency and will be supported by two deputies, John Scott (Tory) and Elaine Smith (Labour).

Good luck Tricia, it won't be an easy job.  Ignore the criticism of others who say you'll not be capable of standing up to Alex Salmond.  Anyone who can stand up to the giant distiller Diago is well equipped to handle any MSP.
Tweet
Posted by subrosa at 20:57

And Trish, don't forget the constituency who elected you will you? I'm assuming the SNP want to keep it next time around. I'm not sure I'm impressed with you actually, but that't just me. Your constituency should matter more than a cushy number in the Parliament as Presiding Officer. You should be wanting to keep Fife. That should be more important to you, but what do I know? I just think you should want to be out there working your ass off.

The PO is important for a smooth running parliament that gets work done for Fife and the rest of Scotland. It's a tough job. She will have her hands full.

I'm sorry to say it, I was not at all impressed with the previous presiding officer who did not keep good order in the chamber. The behavior of the MSPs was nothing to make Scotland proud as seen from elsewhere.

As far as someone of the majority party being PO, a member of the LibDem/Labour coalition was previously so it's pure sour grapes.

JR the way I looked at it is the SNP have already held the post of PO, as have the Lib-Dems and the Tories. I think this time around it should have gone to a Labour person, an independent or a Green. It isn't sour grapes on my part. I'm taking a democratic approach. I'm also serious about pointing out that the SNP made important inroads in Fife and in Marwick's shoes I'd want all the time I needed to build on that for next time. The Scottish electorate are a moody bunch.

Aye, I Have met Tricia too....and I was impress by her. "There's the coffee, there's the sugar, milk's over there and help yourself to the sandwiches", was her introduction to myself at a Glenrothes bi election SNP campaign office a while back.
...and didn't ah just earn, the right to partake as ah tramped dour Glenrothes with other SNP volunteers letterboxing and that sort of thing. A hard task mistress so she was.Sharp as they come and not known for her sympathy towards eeejits is Tricia. OK, the lady is embarking on a steep learning curve but combating set in their ways Fife folk and convincing them of changing their habits of a life time is akin to a plump missionary burdened with a very large cooking pot venturing into virgin cannibal territory in days of yore.Believe me ah know, having lived amongst those folk. if stubborness was worth it's weight in gold, Fife would be richly independent frae the rest of the world by noo. Puts me in mind of Yorkshire so it does.

Jo G Labour flatly refused to put up a candidate back in 2007 for whatever reason. PO is a non partisan position and elected on a free vote.

How would Margo get her assisted dying bill revisited and for the Green's to dilute their presence by 50% not a very good idea.

Jo, she may do well. We'll just have to wait and see.

It is sour grapes Jeanne especially from a woman who was found guilty of fiddling her expenses.

I'd agree wsinaeme, I always thought Fife would be a harder nut to crack than the west as it is the last bastion of communism.