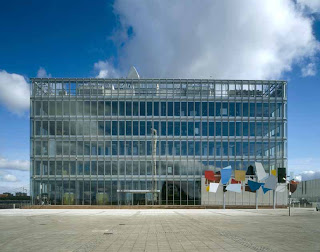 The BBC hasn't served Scotland well for many years but when the corporation decided to build a new £72m office in Glasgow, which opened in 2007, it was thought there may be some change of heart from the London based organisation.

The First Minister wants a Scottish Digital Network which would air local news and current affairs, homegrown drama and entertainment plus minority sports.  The channel would be financed by £75m from the UK licence fee.  Considering the cost of moving the Breakfast Show to Salford is in the region of £877 million - with no real advantage to viewers - an SDN would be excellent value for money.

Another nonsensical move is the production of the Weakest Link (to be dumped next year), Eggheads and the Review Show from the Pacific Quay BBC Scottish HQ plus the controversial move of Question Time.  What is Scottish about any of these programmes? Nothing.  It's purely a PR exercise to 'balance' the percentages of regional programmes.

Now that the majority of the Question Time production team are based in Glasgow, surely we could have a BBC Scotland Question Time once a month until the new Scottish channel is in place.

Or is this asking too much for our licence fee?
Tweet
Posted by subrosa at 10:30

"Or is this asking too much for our licence fee?" Absolutely, you're getting above your station with requests like this, you know. BBC Scotland roll on its closure

I am Dram, but I really think Scottish blogs etc should be pushing hard for this. It would be a start and we wouldn't need Mr Dimbleby to chair it. The pleasant Isobel would be fine.

I think Scottish TV/Radio have done some good stuff in their time, and even if broadcast south of the border would still be popular.

When I lived up there, what used to really chafe my balls was the gaelic programming. I'll concede some of it was quite good and I've sat and watched it, but why produce it in Gaelic when the content would be good enough to sell to a wider audience via discovery or what have you?

I'm pulling figures out my arse here, but I bet there's more Esperanto speakers in UK than Gaelic speakers, but if the Beeb (or any other broadcaster) began broadcasting 3 hours of Esperanto programming twice/three times a week early evening on 2 channels of the available 4 (we only had the 4 back in the 90s) there'd be lynchings in the street.

Scottish TV broadcasting has done itself no favours over the years, and you've only yourselves to blame.

I'm not saying English TV is any better, but in Budvar world where I'm the head honcho for everything the nightly doses of propaganda on Hollyendersstreet would be a thing of the past.

"The BBC hasn't served Scotland well for many years"

Well dare I suggest that from a broadcasting perspective we tackle new first? The MSM may well be out of control. Now that statement raises the spector of freedom of the press which is vital. I'd suggest that with freedom comes responsibility which we just don't see on our screens.

A new digital TV offering delivered to Scotland with an MSM who are fair, unbiased and don't look down their noses at people and views which don't agree with their opinions.

We are more than capable of providing TV content which would original, entertaining and reflect modern Scottish life.

So that is what pravda central looks like, how uninspiring, no wonder they produce what they broadcast as it looks more like a municipal baths building including the ingrained verdi....

I would say back in the 80s and 90s it produced some excellent material Budvar, but since then it's been very limited.

As I'm from the east I have to agree with you about Gaelic programming. I feel it's put on to challenge me and not to inform me and having to watch subtitles is infuriating, partly because it takes me back to the time when I was learning foreign languages in other countries and partly because I feel I ought to learn it. It's not an easy language to learn by all accounts.

Time for the English to rise up and protest WfW. Of course they won't because they're used to Strictly and all these truly informative programmes.

Of course you may petem. I only mentioned a Scottish QM because I thought it would be very simple to produce quickly now that all the staff are in Glasgow.

We are very capable of providing what you say. Unfortunately the BBC would rather spend the money on shipping their staff around the UK.

That picture was taken from the architect's website I think CH. The interior ones were more flattering, but let's face it, you can only gild a lily so much...