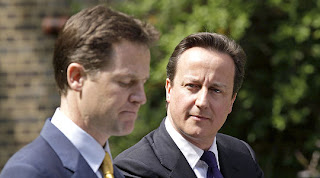 One thought that pops into my mind on a daily basis is 'Are we being duped?'

The coalition have been in government for nearly a year and there's little to show for it.  Lots of talk about cuts, university fees which will help the poorest, increasing the efficiency of the NHS while angering most health professionals and increasing the state pension - but not for current pensioners.

David Cameron insisted, prior to his election, that the English NHS would never go down the privatisation route.  Now he's had to put his NHS Reform Bill into cold storage because so many of those concerned with the implementation have found too many faults.

This week the media is excited at the news that pensioners will receive a flat rate of £140 a week which will avoid the humiliation of older people having to provide confidential personal information in order to receive a few pounds to help them pay their bills. Tens of thousands are too proud to do this we're told. So it's great news for us pensioners as we'll no longer be required to go through the intrusive means test.  But no, the new rate isn't for anyone presently receiving a state pension, it's government 'forward planning'.  When the new rate comes into being, there will be two rates for pensioners.

David Cameron was in Pakistan admitting Britain caused many of the world's problems and as recompense for a diplomatic 'misunderstanding' last year he vouched to give around £650 million over the next four years towards education in Pakistan, which spends barely 2% of its annual budget on education, but more than 15% on defence.

I don't expect the Prime Minister, when he is abroad, to be running down his own country purely to seek favour with his hosts.  He, of all people, should be talking Britain up not down.

We have Nick Clegg insisting his 'overriding mission' is to improve social mobility.  Surely his overriding mission should be the restoration of the public finances and reform of public services.  His wish to create a 'fair' market in internships is both patronising and fatuous and has all the hallmarks of Labour's headline-grabbing initiatives which get kicked into the long grass.

The few issues mentioned above are the tip of a very large iceberg with a hollow core.  We're repeatedly told we must reduce the deficit, yet will having two state pension systems save money?  Does giving handsome gifts of over half a million pounds as a bribe towards business save money?  The only fair way to increase social mobility is to repeatedly tell them it is intelligence and hard work that count, not their social backgrounds.

Policies rushed through the parliamentary process without due scrutiny or foresight - such as the two mentioned - will cost taxpayers far more than if they had been carefully and thoroughly crafted.

Are we being duped?  Too right we are. The Cameron and Clegg duo will continue with their chicanery until someone is brave enough to stand up and shout, 'Enough'. I wonder if this man will be heard.
Tweet
Posted by subrosa at 09:35

Of course we are being duped, SR - and we are also being doped, not only by the politicos but also by the msm, with their slavish repetition of the politicos lies.

I thought that a good article by Heffer, by the way.

That should have been my title WfW. Duped and doped.

Yes it was a good one. Wish there were more like him around.

Cameron and Clegg don't have a principle or a policy between them. They are empty vessels.

The ease with which Clegg changed sides on the tuition fees debate should have worried everyone. These are not people who have imaginative ideas of how to transform the country. They are opportunists interested solely in power and prestige.

Politics is a failed game. You can't trust anyone. No-one cares. No-one. I just wish I had enough money to drop out of the rat race altogether.

People are beginning to awaken and realise that the ConDems are merely a clever piece of cynical political marketing. On close examination they are found to have neither form nor substance.

When listening to the ConDems, the words of Macbeath immediately spring to mind –
“… it is a tale told by an idiot, full of sound and fury - signifying nothing.”

For those of us living in Scotland we can shortly make a loud and bold statement of our condemnation of the ConDems on the 5th May.

They have power. That's all they want - until they can go off and be like Blair.

The four D's - duped by duplicity and dysfunctional design.

We should revoke Cameron's, Clegg's and the rest of the executives passports et al - we simply cannot afford for them to go abroad on these honey trips.

Come to think of it, we should cut out all the frills and have them sectioned under the Mental Health Act, under restraint of an interdict citing them as unfit for any purpose normally accepted as behavioural for the species known as mankind.

Throwing petrol on fires is a bad thing. He could be about to find out.

Subrosa, Intelligence and hard work are like a set of golf clubs in a rowing boat without opportunity and connections. As you've written before it's who knows you that counts. Office politics (and not just the old boys' network as old girls are just as malign) can wreck a career in order to benefit a protege. Am I bitter? You bet!

" When the new rate comes into being, there will be two rates for pensioners. "

And interestingly, I read yesterday that the "universal" £140 pension will be introduced at a time when inflation is expected to have taken the existing pension rate to £155.

So your exciting new guaranteed universal pension will actually be LESS than that received by existing pensioners at that time.

So we get screwed over yet again.

Why does this not surprise me? And why am I not surprised that this wasn't part of the announcement.

I agree wholeheartedly with your analysis SR.

"David Cameron was in Pakistan admitting Britain caused many of the world's problems .......... "

I believe Mr Cameron will find it was British Politicians who've cause (some of the) problems.

Excellent take on this, SR, and Simon Heffer's article really nails the ongoing, shabby, stitch-ups of the electorate in Cleggeron's quest for ever more unaccountability and power!

The only politician I've found talking any sense recently is Francis Urquhart on his site - shame he's not real!!

Usual stuff we're all in this together, from what I have witnessed from inside The System - little change from Liebore - Civil Servants ain't for turning.

New World Order reigns supreme, new African Court of Human Rights confirmed this morning - wonder where that has come from?

Anyway, I know more militarily than I'm able to say, but I can't wait to request redundancy or leave.

Enough is enough - if Scotchland doesn't free itself from this 2 I will be heading to watch a different sunset.

Be well, bring on 5 May - is Scotland finally awakening?...

Well said William and you're right about Clegg. Meanwhile Cameron uses him as the fall guy which of course he is.

Oh I do hope they are JRB. Enough of my English friends are very disappointed so far and think there will be little or no improvement.

Exactly Michael. It's not about what they can do for Britain but what Britain will do for them.

I'll take that as a compliment Crinkly. :)

Some great ideas you have mentioned.

Oh I hope so Demetrius.

Yes of course old girls are the same Brian. I understand your bitterness. Been there, done that, got the scars.

I didn't know a detail was missing WY. Isn't it a bad reflection on government when we say 'why are we not surprised'?

I think his behaviour was a disgrace Joe. People have been hung for treason for less.

Aye Barky, Simon's sharpening his claws these days. Good for him and others like him.

It is Dioclese but even though, FU is a good read.

Exactly CD. It's civil servants who run this country. MPs are the PR side of it.

Let's hope Scotland is awakening. It certainly needs to or it will go down with the rest.

This is bang on topic: