For Those Striving For An English Parliament 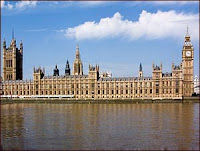 When I googled 'English Parliament' for this post the first image was the above.  It says it all really that the majority of the world think Westminster is the
English parliament.

Of course I don't expect googlers from abroad to necessarily know that the UK is now divided with Scotland having its own parliament and Wales and Northern Ireland having their assemblies, but then these countries are now part of the EU: districts of the grandoise European Union.

It's not often I recommend you read Brian Taylor's posts - in fact I doubt if I have in the past couple of years - but this one shows to my English readers some of the power the Scottish Parliament has.  The comments are quite interesting too.

I'm all for an English Parliament as much as I am for the independence of Scotland.

My country has to grow up and stop the dependence upon welfare benefits, where appropriate, and return to a country which has pride in their achievements.  It's sad to read about Scotland's education system dropping below those of European countries which do have poverty.  We don't; that's another post.

So often I read on MSM blogs the frustrations of English people when, for example, the last Scottish government introduced a freeze on council tax four years ago, yet only now some English councils have made that part of their manifesto.  Shame on the Westminster government I say.

Why?  Westminster wants complete control of the UK yet the SNP is the barrier because they don't accept the bribes.

It's up to those living in England to insist that issues only pertainlng to England issues are agreed by only English MPs. Where is the English backbone?  Is it so reliant upon the oil in the North Sea?  I would say yes and that's why my English friends have, presently, little chance of having their own parliament.

They deserve it as much as Scots deserve to have a parliament which has complete control - but then I would say that being in favour of independence.
Tweet
Posted by subrosa at 20:47

This, SR, deserves - and it is obligatory - a comment. Have a slight problem at the moment though - I am slightly the worse for wear, consequently fingers don't seem able to obey brain - but I promise I will be back in the morn!

"Where is the English backbone? Is it so reliant upon the oil in the North Sea? I would say yes"

And you'd be so, so, so very wrong. Scotland is a net receiver of tax receipts, not producer.

Confusing UK taxes with English ones yet again.

You a Daily Mail reader by chance Cowboy?

The Cowboy Online good moniker but I'd keep punching cows if I was you as the coral knowledge is limited.

English votes for English issues seems fair to me.

Lets reduce 'national' politics to strictly defence, security and foreign affairs and leave the rest to the bodies that make up the UK.

:)
p.s. Sorry for being away so long Subrosa, but I've just been overloaded with undergraduate dissertation work (now all completed, so I can resume my nightly blogging antics!)

Hello Dean. Good to see you and I hope all your studying pays off.

I still think England should have it's own parliament and not be 'attached' . Then again I think the union is finished anyway.

Forgive me Cowboy, but I suggest you're wrong. The majority of oil is in Scottish waters...

Hi SR. We as a nation voted the 640 odd in. With no further control on them. I would suggest that if we dont get them house trained PDQ, we wont have a country to haggle over.
People of England, if you dont get something you think you should have, go and bother those of the 640 odd you can get your hands on, make your points strongly and keep doing it. If enough do it and keep it up, you will get results. But dont try and deprive people of what they have, they may well reply in kind!

I thought you were a Hootsmon fan ;¬)

85% of the Oil is indeed Scottish, (I believe this is the figure the SNP accepts). And 90% of the Gas is in English territorial waters.

Although it means that Scotland is in a position to be self-sufficient, and can pay her way, Scotland is still in deficit to the UK as a whole. English taxes do subsidise Scotland and have done ever since the Goschen Formula in the 1880s, (which preceded the Barnett Formula).

Independence activists do themselves no favours with their repeated bizarre claim that the UK is only kept afloat with the taxes on the Scottish portion of the North Sea Oil.

There was a brief period in the 1980s when Oil Revenues were a significant boost to UK finances, but since then the revenues have been just a useful bonus - they certainly don't dwarf the UK economy as gets suggested!

I want an English Parliament and a looser federal arrangement that is to the mutual satisfaction of all the nations of the UK. But we have to start that process by being sensible and rational rather that resorting to flights of hyperbole.

Wildgoose more like wild guess and its too late for federalism in the UK now.

If there was no oil, would there be no Scottish nationalism?

The two seem to conjoined in the blogosphere, but I would have thought there'd be more to it than that.

As a campaigner for an English Parliament, I welcome your (and Salmon's) support Subrosa; but I want it with, or without, any oil.

Very true Apogee but what do we do? All refuse to vote or as you suggest hassle them until they either put up or get lost? I'd go with you - the latter.

There are many who would disagree with your figures Wildgoose, but I won't because that isn't the point of the post.

The point is we need to work together to achieve independent parliaments in which we have representatives we can trust.

I agree, pushing hyperbole about only plays to those who have no interest in us.

It could well be CH, sadly.

The wish for Scottish independence was there long before oil was discovered Terry. Think back to the stealing of the Stone of Scone from Westminster Abbey...

I think if the English truly believed some of the stuff Wildgoose is throwing around they'd have been well on their own way to independence by now. Instead they have sat around watching Scotland and Wales having devolution, and NI too. They've seen each of those parts of the UK introducing new policies which the English don't get to benefit from. And they've done what? Precisely nothing. That to me suggests they know exactly what Scotland contributes to the UK economy and where they would be without it.

"It's up to those living in England to insist that issues only pertainlng to England issues are agreed by only English MPs."

I get irritated every time I read a sentence like this. They cannot make it that only English MPs vote on English issues because Westiminster is NOT the "English Parliament" much as some people believe this to be the case. The constitution - written or otherwise - does not allow for certain MPs to be "barred" from voting in the Commons. If they're elected to the House they are entitled to vote. The only way around it is for MPs not to exploit the situation - as Scottish MPs did for Blair and for Brown - to carry, legislation which would impact only in England, through. I think they should have abstained in those votes. But I would challenge anyone who claims that they could actually be barred from participating.

I have to agree with your latter comment Jo. it gets me too.