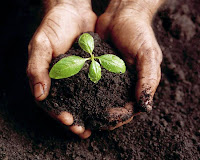 Sunshine brightens the spirit of most but there are always a few hanging around in the wings, intent on casting clouds.

This week we've had 'academics' proclaiming pets should be called companions and their owners renamed human carers.  Horse owners aren't too impressed and neither am I.  It's nonsense but all that is needed is for one of those lobbying groups to grab hold of the idea and before we can say "Duke and Duchess of Cambridge", it will be legislation.  Those who have followed the smoking lobbies' actions will understand how speedily nonsense becomes fact.

Also this week the Westminster government drafted in the help of the BBC's Gardeners' World in a effort to persuade the public to stop using peat compost.  In 1999 the government set an aim to eliminate peat from all but 10% of compost by 2010, but it is still present in 46% of the compost sold in Britain. Thank goodness.

Hilary Benn, launching his campaign at Kew Gardens, blamed amateur gardeners for using peat. "Our research shows us that gardeners often don't realise the damage that peat extraction causes or that the compost they're buying contains peat."

I'm fortunate enough to have space to produce my own compost and in addition I've purchased peat-based compost for years.  The past two years I tried products without peat at the request of my local garden centre.  Not only was the peat-free product twice the price of my usual purchase but the results in many cases were poor, so this year it's back to the mix I prefer.

Defra intend to hold talks with retailers this summer about how they can meet their 2020 target.  Dr Mark Avery of the RSPB:

"The Government has missed the chance for an easy win in the fight against climate change. Using peat in gardens releases a million tonnes of CO2 every year. Removing it from composts and grow-bags would cut those emissions at a stroke and would be the same as taking about 350,000 cars off the road. It would also help end the destruction of our precious peat bogs and the loss of birds, plants and insects that rely on them."

Easy win right enough - punishing the amateur gardener. Until Defra's proposals include commercial growers, who account for around 33% of its use, then I refuse to be brow-beaten into using less effective expensive products.

Prior to writing this post I contacted an Irish friend who supplies peat to the horticultural industry and sent him Dr Avery's quote.  He insists that his industry respects the bogs and has a self-imposed annual quota in place, although the environmentalist movements in Ireland continue to put pressure on them to reduce the quotas.  His suggestion that amateur gardeners are an 'easy touch' may not be too short of the mark.

With you on the animals issue.

However on the peat issue, I must disagree. Although in doing so I must confess to being a bit of a hypocrite. Yes, there are grow-bags in the greenhouse, but if I were to put my hand on my heart I can fully see that large scale industrialised peat extraction is causing irreparable harm.

(… and please note, I regard Dr Avery’s comments as a mere distraction.)

Industrial peat extraction not only strips the top primary layer, but in order to be cost effective, also strips out the secondary and tertiary sub-layers. A bog which has taken perhaps a million years to develop, will never recover from such an industrial process.

Because peat resources are diminishing within the UK and Ireland we now see these same industrialised extraction firms moving to eastern Europe where they can operate on an even larger, but equally devastating, scale.
Just so you and I can grow a few tomatoes.

It's (apparently) OK for a charity to insult horses.

Dr Mark Avery appears to have impressive qualifications to lecture us on Climate Change:-

If that world-renowned Climateologist Dr Phil Jones of CRU-UEA had to fiddle the figures to try to show the globe was warming, why should we believe a chiroptera specialist?

I'm wondering what this issue has to do with the RSPB? They are there to look after birds? They could argue that birds environments are being destroyed. Of they are also re-stocking the countryside with birds of prey so maybe a bit of mixed message coming from them?

Maybe they are just acting like the other NGOs. Have a whine get some money from the government and spiral this upwards to support the organisation?

Like all things peat needs top be managed. All of the whining enviros start from that point that man is doing something very bad. In part maybe but much less and for better reasons than ever before.

Jeez, any chance of some freedom at any point soon?

Rosa - forgive me this is entirely off topic but is a cause for concern.

Real poverty is in the process of being dramatically increased by the measures now being implemented through welfare reforms.

Reforms that were initiated by Labour not, I hasten to add, as a result of the financial meltdown of 2007/8 but were introduced by stealth as the Social Security Act 2006 and passed by Parliament in 2007.

These effected housing benefit conditions and cleared the way for the implementation of the local housing allowance (LHA) along with the introduction of job seeker allowances and all the other euphemisms engineered to cut the responsibilitie s of the State to minimise the costs associated with the effects the same State failed to address. Which was and still is, its failure to create a thriving and progressive real economy.

So these measures were all in the Labour pipeline even before the idiocy of the financial gurus went into meltdown and the present incumbents in Westminster, while they may have added to them, are probably silently grateful to Labour for doing all the spade work necessary for the acts and regulations to be implemented and for them to get the kudos.

The effect will be to increase child and pensioner poverty by increasing the demands on their outgoings by 10 - 30% in order to meet rent and council tax demands.

JRB, I buy two large bags of peat based compost for my hanging baskets and certain tubs. Other than that I use my own compost.

My Irish friend said they were self-regulated since last year and the stripping had been radically curtailed, but I'll send your comment to him.

PS I don't grow tomatoes. I do courgettes and others do tomatoes etc.,but I have tried to use non-peat composts for certain flowering plants and they were expensive disasters. Unfortunately the price of these composts is around 100% more and what worries me is that people who enjoy a few tubs will be deterred from their hobby.

Also, gardeners are an easy touch. Why aren't they trying to get the 350,000 cars off the road? Ah that's another post isn't it.

It's (apparently) ok for a charity to insult anyone microdave. Thanks for the link.

Well said Pete. Once I'm treated the same as commercial gardeners, then I may take more notice.

After all Labour are still claiming to be the party that looks after the people. That the people's interests and well being are safe in their hands; and they're needed in Westminster to effectively carry out that duty.

I'm not sure if a definable line can be drawn between lies, incompetence or sheer hypocrisy, but it certainly looks as though a permutation of two or all of these pejoritives can be legitimately laid at their door.

Thank you Crinkly. It's all ready for morning and I do appreciate all the contributions you make.