Could This Be Scotland's Next Extreme Sport? 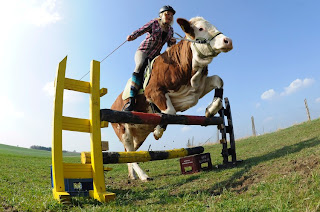 Next month the Scottish highlands will see the introduction of a sport which is either for the brave or foolish, I can't decide. What does matter is the safety of participants and that would seem to have been assessed thoroughly. Every sport carries risk or injury - some more than others.

Horse riders are ten a penny in this part of the country, probably because there are large stables nearby.  The animals are used to traffic and the locals respect their presence on the roads.  But riding holidays aren't common even in such a peaceful and scenic landscape and I've never understood why.

Could all that change with the introduction of cow riders?  It does sound rather extreme and a little ridiculous to suggest that cows could be ridden round the byways of Perthshire, but if it can be done in Bavaria and Switzerland why not here?

When Regina Mayer asked her parents if she could have a horse the answer was a flat no, but the young Bavarian girl wasn't deterred.  She decided to train a cow, named Luna, not long after it was born two years ago.  It seemed the sensible solution because her family own a dairy farm so there was plenty choice.  Bribery is heavily involved in Luna's training - carrots and sugar - but the evidence is there in the photograph which shows her jumping over a metre.  The local veterinarian has ensured her that jumping isn't dangerous for her 'pet'.

Now that Regina is 15 and has mastered the art of cow riding her parents have said they plan to get her a horse so Luna will be pensioned off.

Despite the relative rarity of Regina's hobby, cow riding isn't unheard of, as a quick google proves.  The Swiss have been offering cow trekking for years.

The Swiss could teach us a thing or two about their governance system and attitude to the EU, so why not cow trekking? We've cows aplenty in Scotland and trekking could be a 'nice little earner' for hard pressed farmers.  It's not too extreme a thought is it?

Personally I think incompetent and untrustworthy politicians should be ridden hard over obstacles.

Now that's an event that would fill any stadium.

And by bringing the other non-bovine ingredients, a rider will then have everything needed to make up a serving of Atholl Brose.

does this require a new tool on the swiss army knife?one for taking stones out of cows feet.

Not to mention the cowpats liberally adorning the streets of our fair country, though admittedly the unfortunate inhabitants of several glens are already having to put up with free-range cattle thanks to the 're-instatement' of loose herds.

*For readers of a southern disposition, that's horseflies, not deputy Prime Ministers - and no, they don't just dine on horses; they're very partial to cattle and humans and the bites are bloody painful.

For starters Crinkly, I think they should do away with the restaurants and wine cellars of Westminster. Instal railway station styled 'buffets' instead where you have to stand or sit on the floor.

Ah Macheath, I've got the clegg problem solved. The Germans are thinking they'll not go for nuclear so we could buy their radiation suits cheaply.

As for the cowpats, manure is seldom seen on the roads here as it's scraped up as fast as it falls. Cowpats PH is different of course but it's good for beech hedges I'm told.

Quite possibly hector. I did say it was extreme didn't I? In fact, thinking of a Swiss army knife I had, I'm sure there was a tool which would be suitable for that. Must have a look at one.

Cows must be easier to ride than horses. Especially the ones with handlebars.

As for the 'deposits', rhubarb loves that stuff.

I'm not so acquainted with cow pats LI. Must be an Aberdeenshire thing. :)

Ha ha Demetrius, excellent. If you fancy a holiday on cowback you know where they may be found. :)